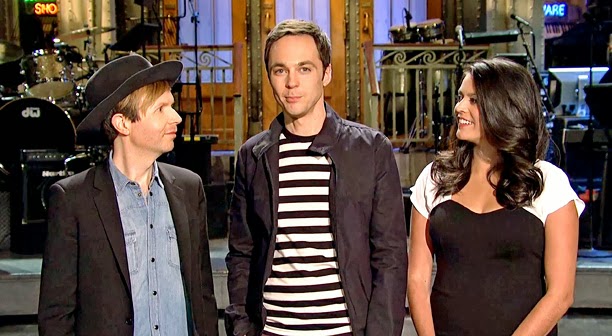 Boy, this show did not come out of the Olympics break strong. That Peter Pan sketch wasn't awful, but when it led off the night, I wasn't exactly filled with enthusiasm for the rest of the show, and that mostly panned out. Parsons was mainly a non-entity, showing up in a fair number of sketches but rarely asked to play anything other than comically put upon or lovably goofy, two beats he reliably hits as Sheldon. He seemed to be having a good time; it just would have been nice if the sketches had been better.

Other Thoughts
Kate McKinnon's Ellen is always a delight, but otherwise that cold open didn't do much for me.

The first Update of the Jost/Strong era was a little awkward and slow, but that just felt like growing pains - Jost was a little stiff (and was likely nervous) but seemed to relax a little as the segment went on. The Shaq/Charles Barkley bit was kind of a mess, but I love Pharoah's Shaq so much I didn't mind, and Jebediah Atkinson was great as usual, particularly in reacting to the audiences' reaction to the Woody Allen joke (“So let me get this straight, you all trust him”).

I could have done without Jost's (admittedly sincere) thank you to start off the night, though.

Nobody does a silent angry black man better than Jay Pharoah, and his glare was the highlight of that 12 Years A Slave audition sketch (which, on the night, was one of the better sketches).

Least Favorite Sketch: So many to choose from. That awful "pooped my pants" elevator one? The weird murder mystery one that had a strong premise but went nowhere? How about the last sketch of the night, with Parsons cowboy who wanted to spring out of a hole for a fellow cowboys birthday? Probably that one.

Favorite Sketch: The returning acting camp sketch wasn't bad - Vanessa Bayer kills it in that role, and the Oscars parody gave it a nice structure. But we're firmly in "least bad" territory here.