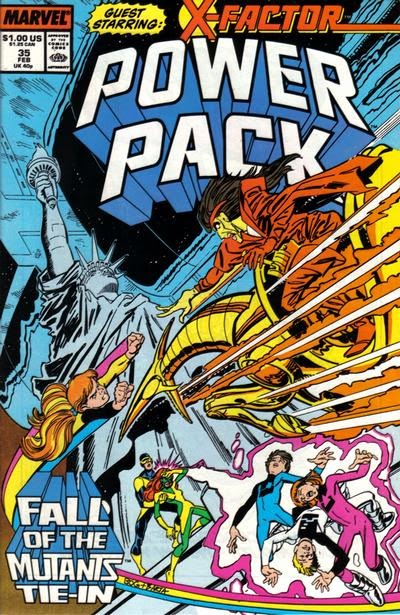 In a Nutshell
Power Pack helps X-Factor battle Apocalypse and his Horsemen.

Plot
With their father away at a conference, the grounded Power children are waiting for their mother to come home from work when the power goes out. After hearing on the radio that the blackout was caused by The Horsemen of Apocalypse, Katie, the only one not grounded, flies off to find their mother on the subway to make sure she's alright. In one of the subway tunnels she encounters Pestilence and is able to escape, but not before getting sick. When Katie doesn't return, the rest of Power Pack track her down and help her heal. They then see Apocalypse's ship crash into the Empire State Building and try stop it, only to encounter Cyclops and Marvel Girl. Pestilence attacks again, but she's hit by debris and Power Pack is unable to save her. After Cyclops and Marvel Girl leave to stop Apocalypse, Power Pack works together to prevent the ship from crashing into the Statute of Liberty, triggering an explosion that blows off enough to ship's tail pipe to save the statute and the tourists inside. After seeing X-Factor emerge triumphant from the ship, they race home, getting there just ahead of their mother. They admit they left the house, but she is too grateful they're okay to punish them further.

Firsts and Other Notables
This issue occurs in and around the events of X-Factor #25, showing what Power Pack was up to between the scenes they shared with X-Factor in that issue.

Power Pack learns the truth about X-Factor this issue, when they overhear their confession to the media.

A Work in Progress
We see what happened to Pestilence after she entered the subway tunnels. 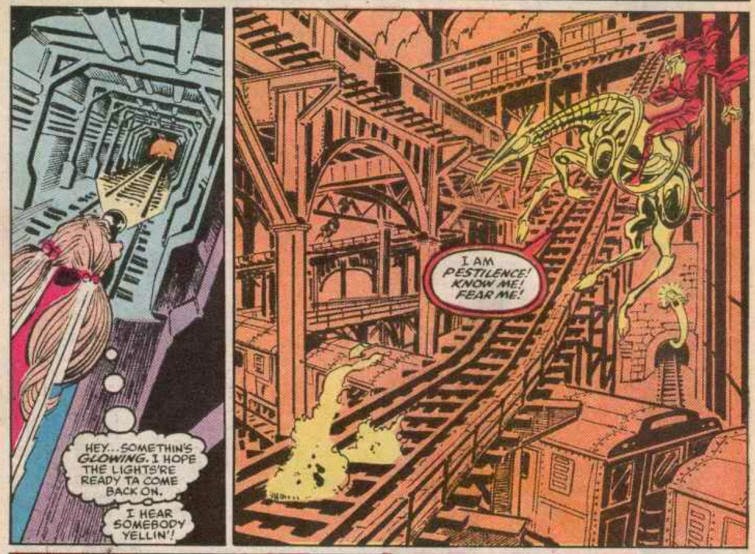 Then, we see the scene at the Empire State Building from Power Pack's perspective... 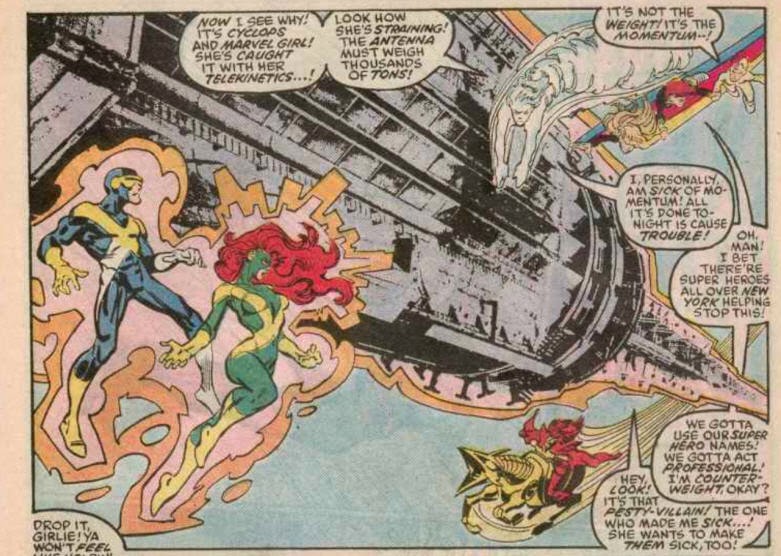 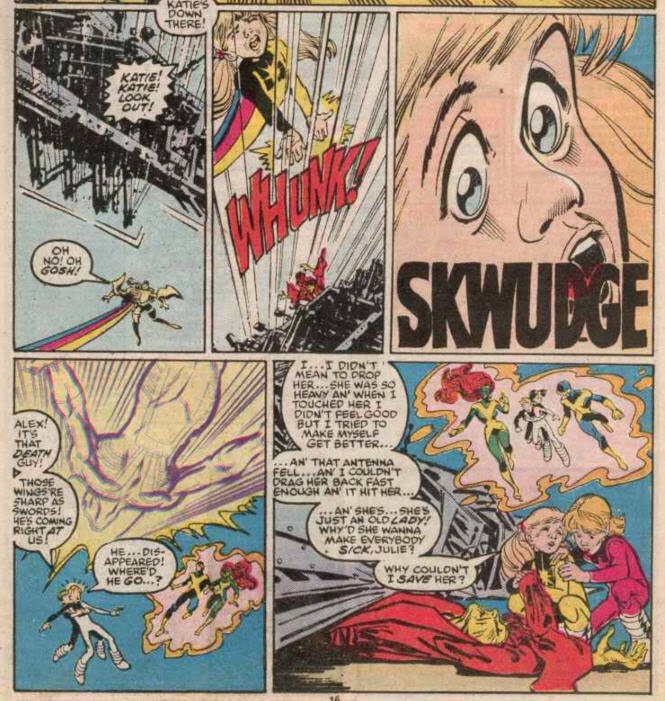 Finally, this issue shows what Power Pack did to trigger the explosion observed by X-Factor. 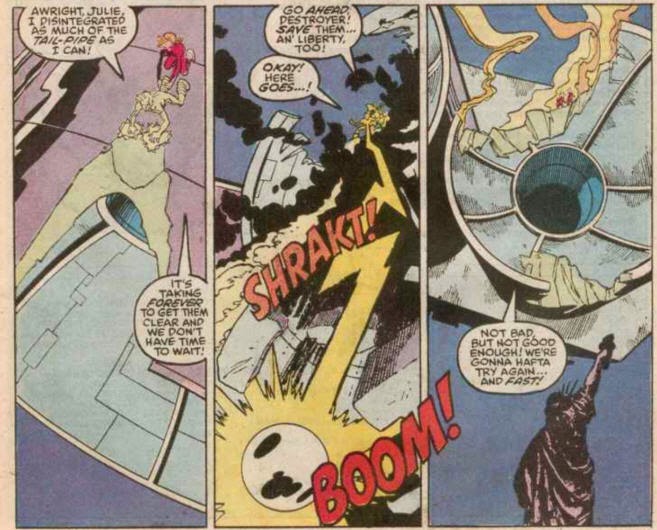 I Love the 80s
I've never ridden the subway in New York, but I suspect the tunnels are somehow less elaborate than their depiction in that image up above.

Human/Mutant Relations
Speculation that the blackout and attack on New York is being carried out by mutants sparks some to opine that the government should do more than register mutants. 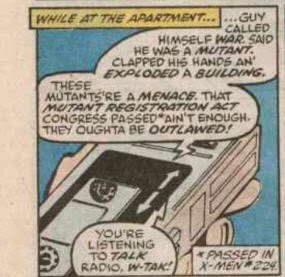 Teebore's Take
Of all the "Fall of the Mutants" tie-in issues, this one ties in most directly, weaving its way in and around the events of X-Factor #25 (not surprisingly, given the shared writer), showing the events from that issue in which Power Pack appeared from their perspective, as well the connective tissue between those events. Beyond that, it's standard Power Pack fare, though it benefits from that fact that, while the Horsemen have a greater effect on the city at large, they don't represent the same kind of homicidal menace the Marauders did, thus helping Power Pack's presence in this story feel less incongruous than it did in the their previous X-Men crossover tie-in issue. 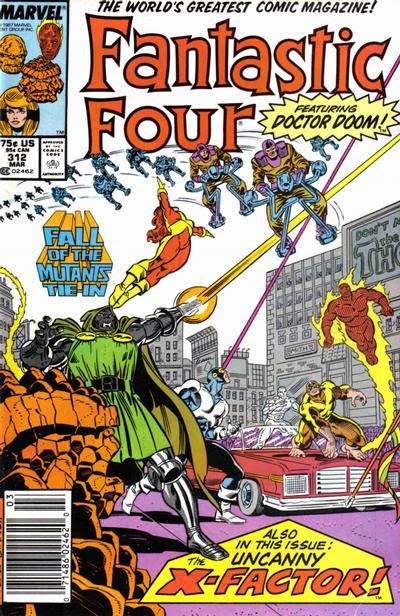 In a Nutshell
X-Factor and the Fantastic Four battle Dr. Doom.

Plot
The Fantastic Four arrive back in New York City, accompanied by Black Panther and the usurped Dr. Doom, who is under Black Panther's protection as a courtesy to a fellow monarch. The Fantastic Four watch the parade in which X-Factor is participating, with Crystal pointing out to the newest FF member, the recently-mutated Sharon Ventura, how much people love heroes. Suddenly, the parade is attacked by stormtroopers sent by Kristoff Vernard, the usurper of Doom's throne. After the two teams defeat the troops, Doom asks X-Factor for their help restoring him to his throne. When they refuse, he captures Beast and Sharon, and tells X-Factor they have one hour to level the Latverian Embassy before he kills the captive heroes. Doom escapes to Reed Richard's lab in FF headquarters and imprisons Beast and Sharon, but seeing the sad state of Beast's mind prompts Sharon to action, and she manages to free them both just as the rest of the FF and X-Factor arrive. However, during the ensuing fight Doom captures Crystal and barters her life for his, and he escapes. In the wake of her encounter with Beast, a reinvigorated Sharon asserts her commitment to the Fantastic Four.

Firsts and Other Notables
The big "Fall of the Mutants" tie-in in this issue involves the Fantastic Four observing the parade in which X-Factor participated in X-Factor #26, which is promptly attacked by some of Kristoff's goons.

This issue takes place during a curious time for the Fantastic Four, as Mr. Fantastic and Invisible Woman have both left the team to focus on their family (they'll eventually return to the team after a short stint as members of the Avengers, their forced return by editorial pissing off Englehart enough to leave the book in protest), leaving a further-mutated Thing in charge of a team that consists of himself, Human Torch, Crystal of the Inhumans (Quicksilver's ex-wife) and the second Ms. Marvel (Sharon Ventura, who took the name after Carol Danvers gave it up in the wake of Rogue's attack and her transformation into Binary), who has recently mutated into a Thing-like creature herself.

Meanwhile, Dr. Doom has lost his throne, and Latveria is being ruled by Kristoff, his adopted son, who at the time believed himself to be the real Dr. Doom.

Hilariously (and awfully), Crystal declares that the FF stayed out of the X-Factor/Apocalypse battle because after dealing with Quicksilver, she tries to stay clear of mutants. So innocents probably died and millions in property damage occurred because Crystal married a jerk once. That explains where the FF was during "Fall of the Mutants"; maybe the Avengers passed on helping because Beast hadn't called them recently? 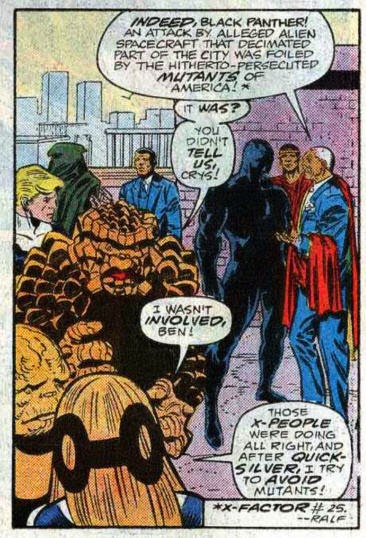 A Work in Progress
Iceman notes that the name "Marvel" has become popular, and suggest that Jean may have something to do with that. 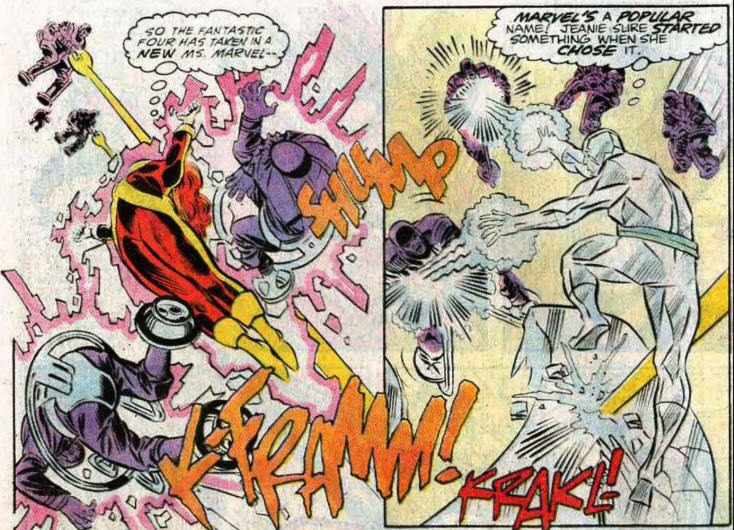 Ms. Marvel spends this issue bemoaning her condition as a Thing, until she spends some time with the increasingly-dumb Beast and realizes that while her physical condition may be less than ideal, at least she still possess her mind. 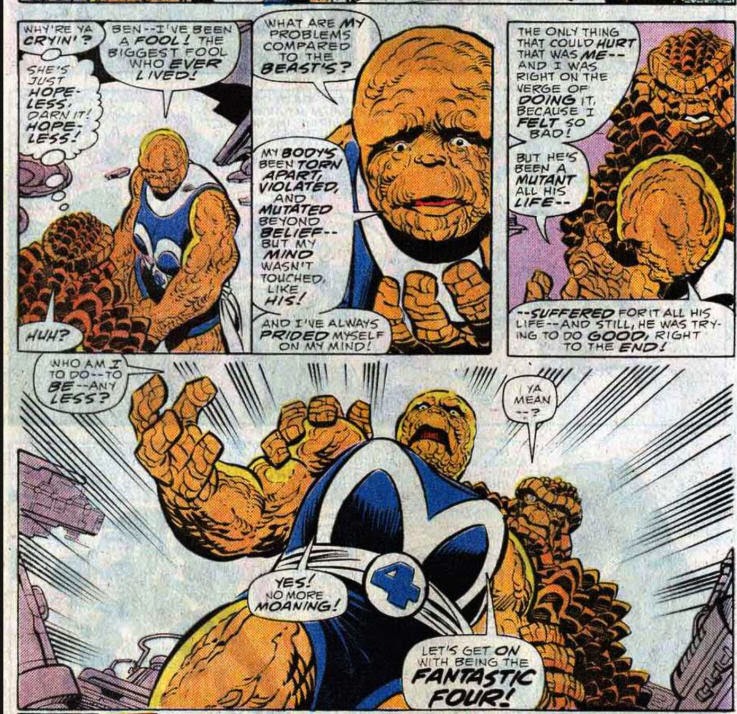 Teebore's Take
This, then, is the least of the "FotM" tie-ins, remaining very much a Fantastic Four story in which X-Factor guest stars, the only real "FotM" element being the ticker tape parade from X-Factor #26 getting interrupted by Fake Doom's goons. Englehart uses Beast's current condition to move Sharon's story forward (in a somewhat dubious way for Beast ie "jeez, this might suck for me but at least I'm not as awful as that guy!"), but beyond that, X-Factor's presence is largely superfluous to the plot. There's definitely some charm in this offbeat era of Fantastic Four history, but this is hardly required reading for any X-fans, and it adds very little to "Fall of the Mutants".