The Walking Dead 4x14: The Grove 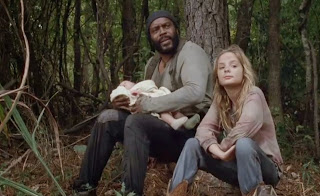 The Bad: More wheel spinning; nobody is closer to Terminus. This episode heavily featured Carol. Their seemed to be an acceptance that Carol’s decision to kill the two people at the prison was right one.

The Ugly: Need I even say?

Zombie apocalypse stories are built on two things: hopelessness and tough decisions. Once Carol and Tyrese came across Lizzy standing over Mika’s dead body they were left with an incredibly tough decision. This part of the episode really engaged me. I couldn't help but contemplate what I would do in their position. Was there a right answer?

I agreed with Carol (for once). She said there was no fixing Lizzy. That may or may not be true but, regardless, if Lizzy is capable of being “fixed” Carol and Tyrese certainly don’t have the tools to do so. Lizzy is also too dangerous to keep around. She could kill Carol or Tyrese in their sleep or Judith at any time.

So the only real decision is whether to kill Lizzy or abandon her. If you abandon her she’ll probably die a slow painful death. She might be picked up by other travelers but then their lives would be in danger. Frankly, giving her a quick death was the only option.

I enjoy when an episode really gets me thinking and engages me intellectually. This episode also gave the requisite amount weight and emotion to what happened. At the same time, everything I found interesting about The Grove happened in the last 15 minutes. That’s an awful lot of filler. Obviously you need some build up to the deaths but perhaps giving us a small B-plot wouldn't have been a bad idea. Especially since “focusing on just one part of the group” isn't the novelty it once was.

Other Thoughts:
The opening scene reminded me of a Fallout trailer. Why is old-timey music so creepy? Regardless, the opening scene made it seem like the music was actually playing. It wasn't. I’m not a fan of the fake out.

I’ll be honest, I have a bunch of notes about the Lizzie/Mika comparisons and what Carol and Tyrese have said about them but, by the end of the episode, I think we can all agree that we’d take Mika and her flaws over Lizzie and her’s.

I will admit that I don’t feel Carol’s attitude caused Lizzy to kill Mika nor do I think much could have been done to prevent it. However, I really wish Carol was more accepting of Mika’s “I don’t want to kill people” attitude. Obviously it’s too simplistic of a point of view for the zombie apocalypse but it wouldn't hurt Carol to engage in a healthy, nuanced debate on the subject. Perhaps a middle ground could have be reached?

Speaking of Mika's attitude, I’m certainly not saying she didn't need to toughen up some. I’m a vegetarian and even I’d kill a deer in the zombie apocalypse.

I would think the recoil of a pistol would make it slip from Mika's hand. Especially since it seemed like she could barely hold it.

So, the counting flowers thing (which apparently Lizzie had used in a previous episode). Is that indicative of an actual mental issue Lizzie had or what?

Why did that house have gas?

I’m curious about scenario of Lizzie stabbing Mika. Did Mika fight back?

So was the fire the house Daryl and Beth burned?

I’m not a fan of Tyrese forgiving Carol. I could see him continuing to travel with her because he needs her but I wish he hadn't outright forgiven her.

The Talking Dead can be...over the top.

Melissa McBride was on The Talking Dead so naturally it was a Carol love fest. Ugh. Not that it isn't usually.

The Talking Dead also mentioned that this is the third episode in a row without Rick. I hadn't even really noticed.

Phil Brooks (AKA C.M. Punk) was on The Talking Dead. They kept talking about The Walking Dead when all I really wanted to know was what his impetus for leaving the WWE was and if he thinks he’ll return.
Newer Post Older Post Home
Posted by Dr. Bitz at 12:31 AM