Around the Web
Couple reviews from me up at Sound on Sight: Guardians of the Galaxy #12, and the Transformers portion of IDW's X-Files crossover. 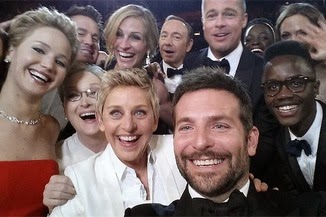 Putting aside my bitterness over losing my Oscar pool by one point, this wasn't a terrible show, though it wasn't a terribly good one either. Ellen turned in a perfectly cromulent monologue, then became far too obsessed with going out into the crowd (which, I know, is her schtick). Some of that material worked, some of it didn't. The pizza thing mostly did, largely because, as fabricated as it may have been, the reactions to it felt genuine. There's something undeniably entertaining about seeing people like Meryl Streep and Brad Pitt fishing around for change or Harrison Ford's excitement at the prospect of pizza, just like regular people!

The various montages were largely pointless, as they usually are, but what can I say? I'm a sucker for montages.

After the Jaws-theme debacle last year, this year barely any winners got played off the stage (which likely led in part to the show's longer running time), but for the most part, the speeches were pretty good this year, with very few "lists" thanking agents and stylists and most of them some combination of heartfelt, well-composed and entertaining.

I'm still not sure why Wizard of Oz (and Oz alone) got singled out for recognition. 1939 was a banner year for film (Stagecoach, Mr. Smith Goes to Washington, Gone with the Wind, just to name a few), and probably could have gotten its own montage.

Sleepy Hollow: Indispensable Man/Bad Blood
Kudos to Fox for giving this show an early second season pickup, as it enabled the creators to end season one with a bonafide balls-to-the-walls cliffhanger. Every single one of the main characters is in a bad situation, which is an impressive feat. Had this aired with the show on the bubble, it would have been a giant "eff you" to the audience, running the risk of ending the show with the fate of all the characters up in the air. Since we know it's coming back, instead, it's just a great cliffhanger ending to a surprisingly strong first season.

I should have, but didn't, see it coming that John Noble was a bad guy. Well, the fact that he's Crane's son, I probably should have guessed. That he's also War was a pretty clever twist on a twist, and I like the fact that both War and Death have a personal beef with Crane.

That said, I'm not sure of the logistics behind how Crane's son, who was buried alive when he was roughly a teenager, emerged looking like John Noble and abjectly older than Crane himself. I feel like he should either be the same age as when he was buried, or, like, hundreds of years old.

And yes, I'm questioning the logic of that while letting the secret booby-trapped Masonic tomb of George Washington hidden in the woods of upstate New York roll right off my back.

I'm not sure how I feel about actual cops investigating all the stuff with Irving's family. On the one hand, the confluence of the real world and the fantastical world is an interesting conflict to mine; on the other hand, I'm not sure the pacing of this show will allow for the real world forensic stuff to get its due.

Glad to see that there's more to Coulson's resurrection than we'd gotten in "Magical Place", though I have no freaking clue who the blue Engineer from Prometheus is supposed to be (in terms of species, it's probably either a Kree or an Atlantean, both of whom are traditionally blue skinned and the former of which will be appearing in Guardians of the Galaxy, but I have no idea what the "GH" represents, whether a species or character name).

I kept waiting for the other shoe to drop with Bill Paxton and Not Falcon, expecting one or the other (or both) to turn out to be evil or at least more pro-"the book" than Coulson's team, but for this episode at least, they wisely avoided that course.

That said, one or the other is probably the Clairvoyant, right? With Paxton, being the bigger star, the most likely culprit but Not Falcon a contender just for the possibility of a swerve away from Paxton.

Glee: Frenemies
Over Glee's long winter break, the producers announced that when the show returned, it would focus more fully on the New York storylines in favor of the Lima storylines, yet that wasn't present in this episode, which was divided mostly evenly between the two settings (with New York getting a slight edge material-wise, but by no means the domination we were led to believe would occur). Maybe they're just easing into that new dynamics, or maybe the press was just a ruse to get people to stick around for what the producers clearly feel is the more popular characters/storylines.

The idea of Rachel and Santana getting the same part (essentially) in a Broadway musical is patently ridiculous, but at least the show acknowledged this and made a plot point out of it (in that the director revealed he cast Santana as much for her hailing from the same high school as Rachel as for her obvious talent, for publicity reasons).

The Kurt/Starchild stuff was mostly harmless, but I really hope the show isn't seriously setting up another overly-long "trouble in paradise" storyline for Kurt and Blaine, triggered by that photo.

Brooklyn Nine-Nine: Tactical Village
This was a perfectly decent episode, but in terms of the underlying relationships, I'm still not on board with doing a "will they/won't they" plot between Peralta and Santiago, and I'm also not too wild about the implication that Boyle still isn't over Rosa.

As strong as the two main plots in this episode were (the Britta/Jeff/Duncan stuff and the Abed/Hickey interactions), the C-story involving Chang was probably the best use of Chang on this show in at least a season-and-half (since sometime before the whole "Chang Dictatorship" business).