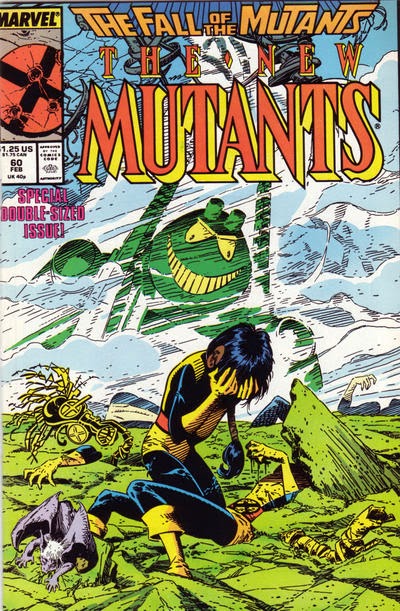 In a Nutshell
The death of Doug Ramsey

Plot
The Animator brings the captured New Mutants deeper into his complex, where he imprisons them before ordering his Animates to destroy a failed batch of fellow creatures. Back in New York, Magneto flies off to the Hellfire Club to use their equipment to search for the missing New Mutants. Meanwhile, Roberto and Warlock discover the maps their friends had been studying and deduce their relative location. Leaving a note for Magneto, they fly off to find their teammates. Meanwhile, the Animator is contacted by Cameron Hodge, seeking reassurance that the Animator is still working to find a way to stop mutations. Though he insists he is, Hodge decides to visit the island himself. Worried the Right will usurp his work, the Animator decides to flee. But when the New Mutants convince the Animates guarding them that the Animator intends to kill the Animates, they break free and overpower the Animates. Believing they've won, the New Mutants prepare to take an elevator to the island's surface, but when it opens, Hodge and a group of Right soldiers emerge. 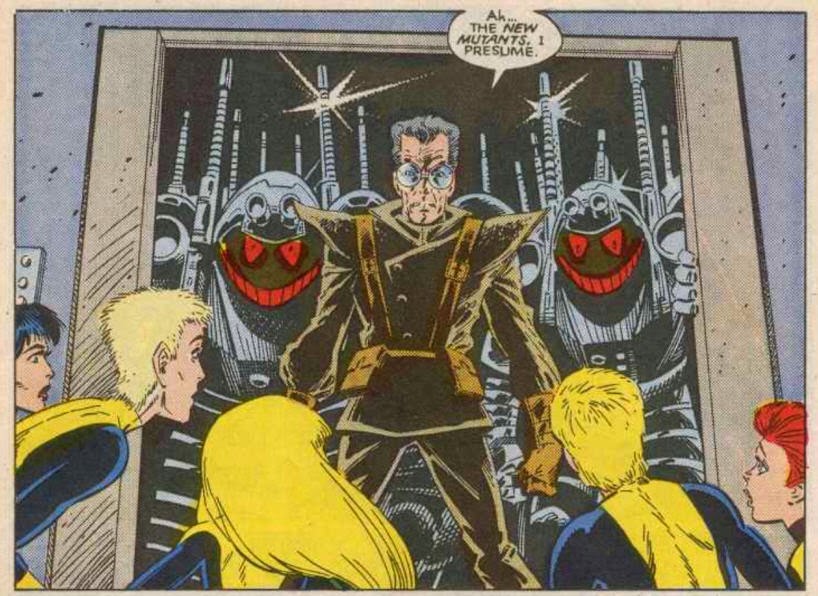 The New Mutants are quickly re-captured and given inhibitor helmets, and Hodge orders his soldiers to purge the island. However, Bird-Brain leads the Animates against the soldiers. On the surface, the Animates help free the New Mutants just as Roberto and Warlock arrive. As the battle rages, Doug watches from behind a rock as the Animator shoots at an unsuspecting Rahne. Doug leaps out, pushing Rahne out of the way and taking the bullet himself. The battle turning, Hodge orders a retreat, but a tentacled Animate in the ocean grabs the plane as it prepares to bomb the island and drags it underwater. Back on the island, Bird-Brain wrestles with the Animator, seizing the animal skull he wears, declaring himself the leader of the Animates. As the New Mutants celebrate their victory, they discover Doug, dead from the gunshot wound. An enraged Illyana prepares to shoot the Animator, but Rahne insists they need to be better than that, so Illyana sends him to Limbo instead. As the Animates argue over whether or not they're human, Sam tells them it's the choices they make which make them human. He says the Animates have chosen what they'll be, and have earned the right to name themselves, just as Doug would have wanted.

Firsts and Other Notables
Doug dies in this issue, taking a bullet meant for Rahne shot by the Animator during the New Mutants' fight with the Right. He is the first New Mutants character to die, and the first X-Men character in general to die since Jean Grey. Though Simonson has said she always had a plan in mind to eventually resurrect Doug (basically, he'd be revived by the techno-organic virus, which he was hinted at having acquired not too long ago), she won't get a chance to do so before leaving the book, and as a result, Doug's death stood for a relatively long time. 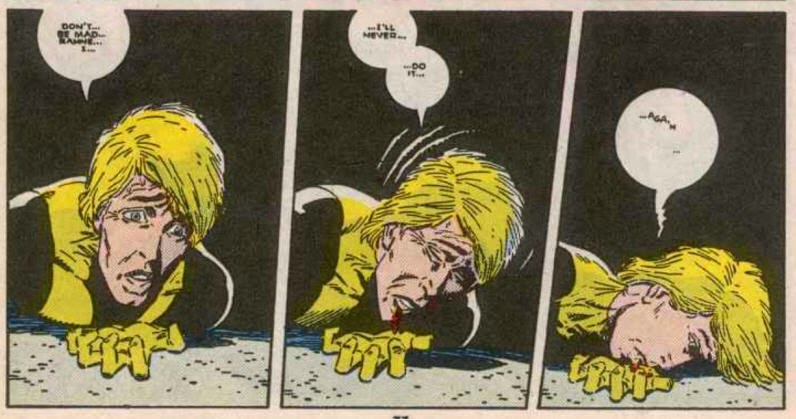 In the 90s, Excalibur will feature Douglock, a techno-organic being who looks like Doug and seemingly possess his memories, but he will eventually be revealed to instead be a resurrected Warlock, taking Doug's form. Eventually, Doug will be brought back for real, as part of 2009's "Necrosha" event, and he remains a part of the larger X-universe today. But for a good chunk of time there, Doug stood alongside Thunderbird as one of the few examples of a character death that stuck in the X-Men universe.

Cameron Hodge, leading a force of armored Smiley Face Right soldiers, appears in this issue. In the wake of both recent issues of X-Factor (in which the X-Factor kids were captured but escaped) and the fight with the New Mutants in this issue, Hodge officially abandons the Right's "capture young mutants, study them, and use them for our own purposes" plan and basically devotes the organization to the straight-up genocide of mutants, a mission it will attempt to carry out in all future appearances. 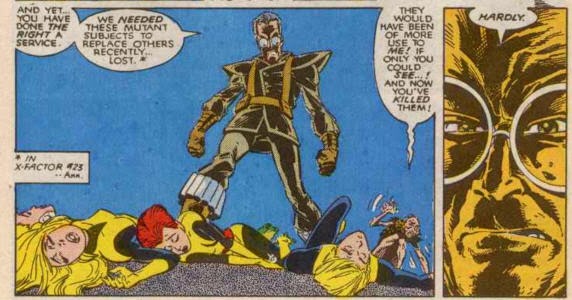 A Work in Progress
As of this issue, the Animator has added an increased level of spittle and pixie boots to his menacing repertoire. 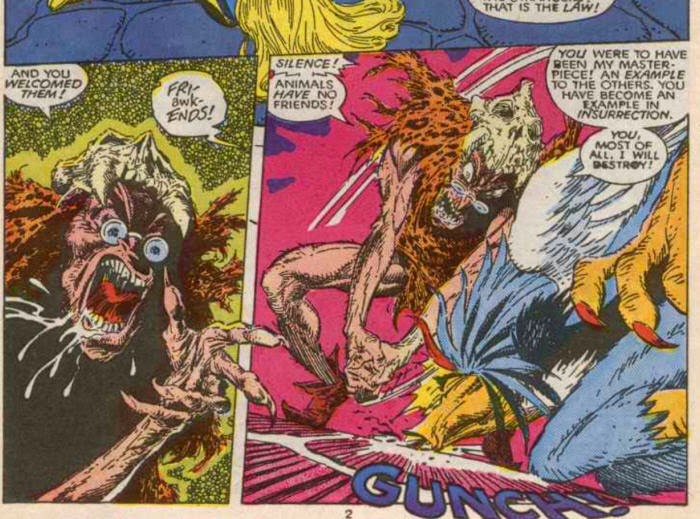 Somehow, a net is able to contain Sam, because he can't steer while trapped inside it. Even though his whole schtick early in the book was that he had a hard time steering, net or not. 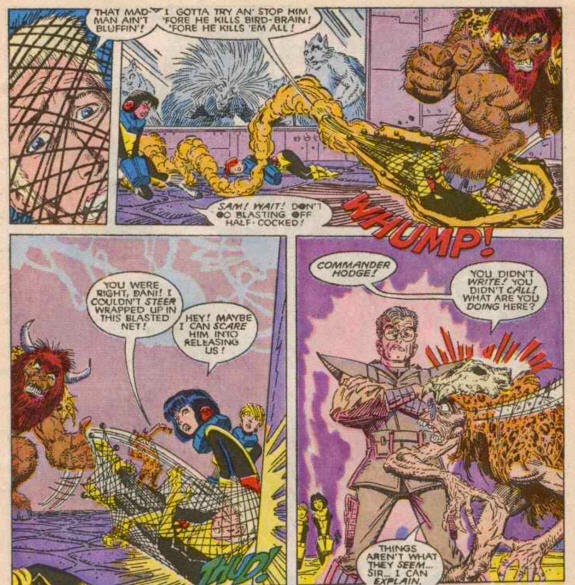 Also, while the New Mutants are eventually placed in tubes which are strong enough to contain Sam's blast and Rahne's werewolf-strength while allowing the Animator to use gas to keep Illyana sedated and unable to teleport away, prior to that, the New Mutants are simply held in large shackles around their necks and hands, and no reason is given for why Illyana simply doesn't teleport everyone off the island at that point. Later, after the New Mutants break free, but before the Right arrives, Illyana even teleports back to the mansion for Magneto, but never considers bringing everyone home with her. And of course, in the battle with the Right in which Doug is killed, Illyana is one of the first New Mutants freed from her inhibitor helmet, yet once again stays and fights whether then sending everyone home. 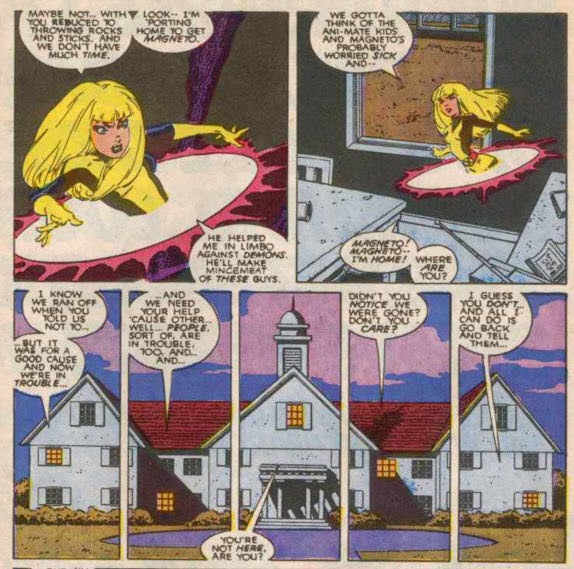 Rahne spends a few panels in this issue angsting over losing control while in her animal form. 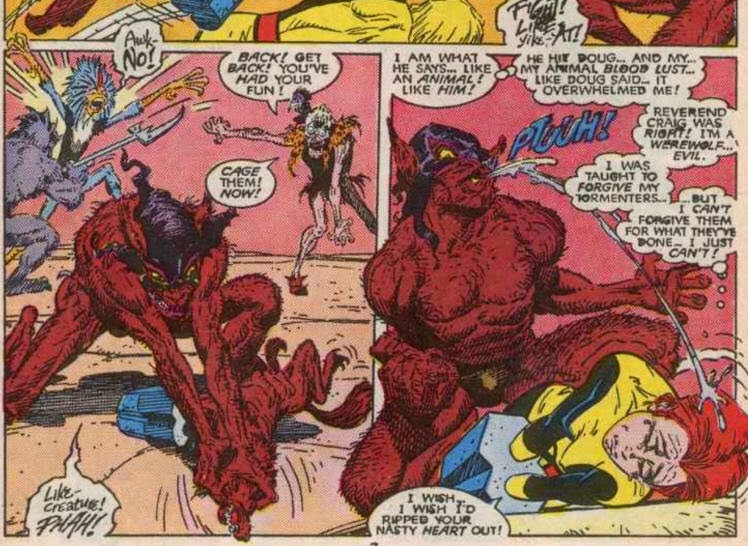 Magneto leaves for the Hellfire Club this issue, to use their equipment to try and track down the New Mutants (since Cerebro is still damaged), something which puzzles Roberto and Warlock, as they were absent when Magneto formally joined the club. 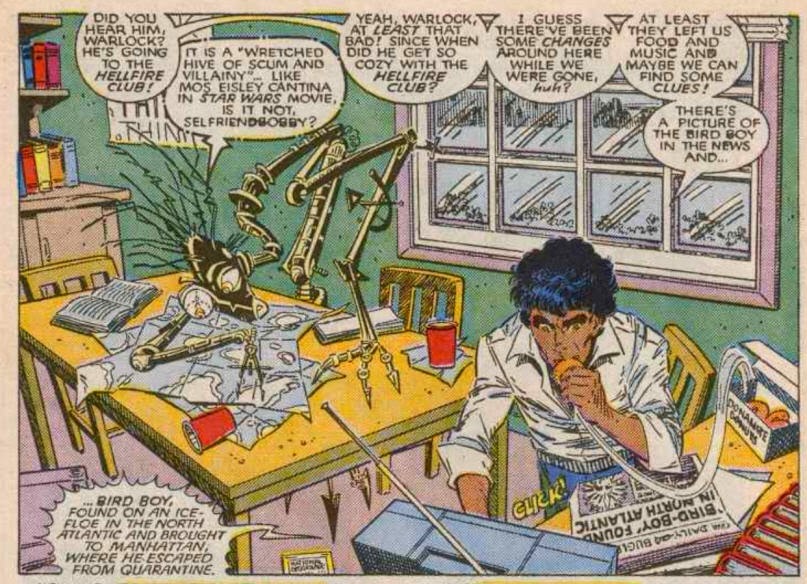 For what it's worth, we get an origin of the Animator this issue. 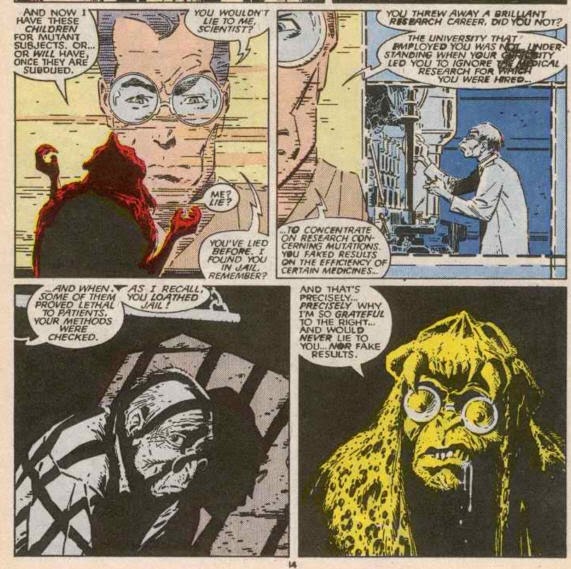 The Right uses the same inhibitor helmets on the New Mutants that they used on the X-Factor kids in X-Factor #22-23.

Even Hodge thinks the Animator is a joke. 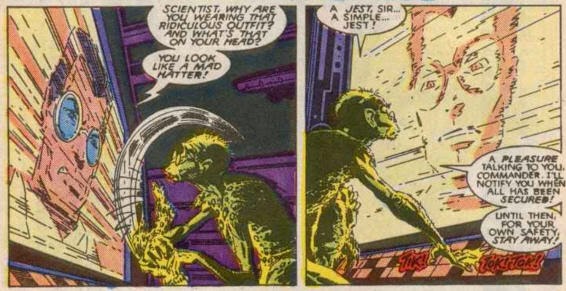 Artistic Achievements
Rahne's hybrid werewolf form tends to get a depicted differently by every artist; I genuinely like Blevins take on it, as seen in this panel.

Louise Simonson on the death of Doug Ramsey
"The artists hated Doug, because he never did anything! He wasn't fun to draw. He just stood around and hid behind a tree during a fight. And the only time he didn't hide he got killed. It just goes to show! Every artist to ever draw him said 'can't we kill this guy?' We would get letters from fans about how much they hated him. We never got any letters from people saying they liked him until he was dead."

"I loved him so much he had to die. This was one of my big experiments. Doug had the transmode virus, so really you shouldn't have been able to kill him anyway, right? He would just come back in some other form: a Warlockian form. So killing him was not that big a deal. I never kill a character if I don't know how I'm going to bring him back because it's comic books, after all. We'd gotten a lot of letters from readers who hated him and thought he was boring, thought his powers are stupid and blah blah blah. They wanted us to kill him and there is nothing I like more than pleasing my readers. Lightning is going to strike me! Also, he was a difficult character to write and to draw. He was not a visual character. His powers were mental. He could translate languages, which meant to get him to use his powers, you had fool around every issue and have him translate something and that gets a little old after a while. So there were a lot of reasons for Doug to go away."

This issue attempts to add some gravitas to the current "New Mutants are somehow menaced by a dingbat in animal skins" plotline in two ways. First, it follows through on the Animator's connection to the Right by porting over Cameron Hodge, complete with armored Smiley Face goons, from Simonson's X-Factor. Though little is ultimately made of thiss (Hodge and company mainly show up for a fight scene, say "nuts to this" and leave, never quite taking it seriously in a genuinely entertaining approach), it does give the New Mutants a credible opponent in the Right soldiers (I can buy that the armored Right guys can overpower the New Mutants; the Animator, not so much), and any effort to to further strengthen the connections between the X-titles, especially given their various status quos at this time, is appreciated.

The other attempt to add gravitas to the story is the death of Doug. This one doesn't work quite as well. On paper, it makes sense: killing off one of your main characters is a pretty easy and obvious way to say "hey! The stakes of this story have never been higher! It is an important story in the history of these characters!" (it's a technique superhero comics' will overuse to the point of comedy in the 00s), and Doug is an easy mark: his power isn't flashy, making him visually boring and a pain for artists to draw, and Simonson maintains she received plenty of letters from readers asking her to kill off Doug. If you're going to kill any New Mutant to lend an otherwise mundance crossover story some oomph, Doug is pretty good candidate.

But even putting aside the fact that killing a character to make your story feel more important isn't just easy and obvious, it's also lazy, the reasons for killing Doug specifically are the exact same as the reasons against killing him. You don't kill him specifically because it's the obvious move. It also doesn't help that Doug's death suffers from poor micro-plotting in this issue: there's no good reason Warlock doesn't immediately form himself into armor for Doug the moment he arrives on the island (like he's done countless times before) or that Illyana doesn't teleport all the New Mutants and the Animates off the island the moment she regains her senses (or, conversely, sends the Animator, Hodge and the Right to Limbo) except for the fact that if either of those things happen, Doug won't die.

But the most important reason you don't kill Dough is because, for however much artists may not like drawing him, there's still potential in that character. He has strong connections to Warlock, Kitty and Psylocke, and a budding relationship with Rahne that's been one of the more well-rendered elements, in terms of characterization, of Simonson's run thus far. He has a unique and interesting power that, while not visually flashy, lends itself to the book's "students first" aesthetic, and it's not that difficult to craft situations that allow him to shine (Claremont did it on several occasions), especially when he can just team-up with Warlock in the situations where his power isn't as useful.

He does at least get to go out a hero, saving Rahne, but the story simply doesn't provide enough justification for why that situation had to play out the way it did. There was more to Doug than being the guy who can't shoot energy blasts or lift cars, and he deserved more than to be one of the franchise's first cases of "event fodder".

Next Issue
Tomorrow, the Horsemen of Apocalypse run amok in X-Factor #25. Next week, the X-Men battle the Adversary in Uncanny X-Men #227 and the New Mutants deal with the fallout of Doug's death in New Mutants #61.
Newer Post Older Post Home
Posted by Austin Gorton at 12:00 PM