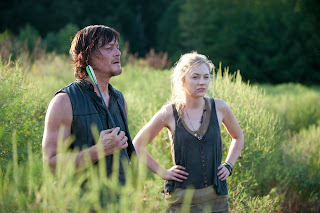 The more things change the more things stay the same. You can have society collapse, the dead rise and the average life expectancy cut down to an eighth of what it was. No matter what happens, though, certain constants remain. One those constants, apparently, is that underage teens will always seek out alcohol.

This is the first episode, I believe, that focused on only one piece of the fractured group. It simply stayed with Daryl and Beth as they search for and then drink the aforementioned booze. Once they reach the end of their journey they realize they've learned something about each other and themselves. It’s just your typical teenage comedy film…with zombies.

One of the main criticisms levied at The Walking Dead is the lack of character development. Most of the characters have one dimension at most and little-to-no background story. (I mean, seriously, people love Glenn but what do we even know about him?) That’s not to say nobody ever gets interesting character moments but those character moments are usually met soon after with death. Teaching us something new about a character only to kill them off in the same episode is not character development. It’s almost like the exact opposite.

But this season, and this latter half specifically, seems to be intent on correcting this. In Still we learn a little about Beth’s past growing up as Hershel’s daughter and about how she sees herself in the present world. (Shockingly, she doesn't see herself as entirely useful and doesn't believe she’s long for the world.) We also learn about Daryl’s adolescence (which we kind of knew already) as well as the fact that he blames himself for the prison falling. We also learn that he’s a mean drunk. At the end of the episode, after having a good cry, Daryl uses a symbol of society’s past to burn down a symbol of his own.

In the end, there was nothing wrong with this episode. I must say, though, that one of the more fleshed out characters already is Daryl so it seems like a waste to spend more time with Daryl instead of focusing that attention on other characters who are in desperate need of development. On the other hand, who doesn't want more Daryl?

Other Thoughts:
I suppose the whole "Beth wants to get a drink" thing was a combination of her wanting to have some goal other than "survive" and she also probably wanted to reclaim an experience she had lost to the zombie apocalypse. At the same time it really did come out of nowhere. There was probably a better way to transition to it. Like, maybe she sees an empty liquor bottle on the side of the road or...something?

That trunk was a lot more spacious than it looked.

If they were in a safe spot, like the prison, I can see Beth trying out alcohol but aren't they a little too vulnerable to be thinking of boozing it up?

So, yeah, a golf clubhouse is sure to have been stocked with booze. However, once you see it had been occupied by a group of people at some point you should probably suspect the alcohol was the first to go.

I'm no fan of peach schnapps but, at the same, it seems like a good starter drink to me.

I didn't realize when Daryl and Beth were having their meaningful dialogue that they were outside until Daryl said they should go inside. Ummmm....yeah you should.

Symbolism and catharsis aside, is it wise to just burn down a defensible structure like a house that could be used by you or others in the future? And if you are intent on doing that, how about waiting until the morning instead of creating a giant commotion and then immediately entering the woods in the middle of the night.

According to Norman Reedus on The Talking Dead the group at the prison had a "zombie" disaster plan but never had a "tank through the front gates" disaster plan. Which is...a slightly better explanation than none at all?
Newer Post Older Post Home
Posted by Dr. Bitz at 11:52 PM