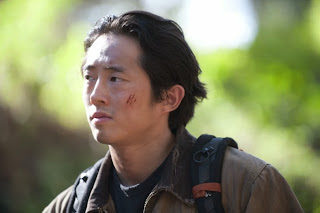 This episode began with Sergeant Abraham and his crew, Tara and Glenn walking the railroad tracks. Glenn, not having said anything, sees a message from Maggie to go to Terminus and then breaks into a dead sprint. I believe I've made this point before but that scene really crystallized for me how Glenn and Maggie’s characters are solely defined by their relationship.

Glenn’s single minded focus to find Maggie this episode certainly was consistent with his character. As well as his him being blind to the fact that he was taking advantage of Tara’s guilt. Even entering a clearly-too-dangerous-to-traverse tunnel was in character because it was all about finding Maggie.

The reason I didn't care is because, while it’s been made abundantly clear that they love each other, I've never actually seen why they love each other. What makes them compatible? In fact, when I think back, it seems like they got together more due to a lack of alternatives than anything else. I certainly was happy to see a conclusion to a running plotline but, in the end, Glenn and Maggie’s relationship is a MacGuffin and little else.

Other Thoughts:
Meanwhile, Daryl is hanging out with Joe and his band of rogues. Apparently, all you need to do to keep a gang of ruffians in line is to keep the dibs rule sacred. That logic seems…dubious at best.

I’m not sure what Daryl’s end game is. I understand the notion that hanging out with these guys may be better than going it alone but I would've liked some indication that he has some plan to look for Beth. Or did he give up on her?

How did the other rabbit hunter sneak up on Daryl? Shouldn't Daryl be more aware of his surroundings?

I’ll certainly be among the mad men if Daryl ends up breaking bad after finding out Rick took part in the killing at the house Joe and his gang were staying in. I hope Daryl doesn't cross the Rubicon and send Rick to hell...........on wheels?

I did have to rethink the scene of Rick in the house. Was Rick murdering the guy in the bathroom warranted? I'm still unsure.

Glenn seemed awfully confident that he’d be able to spot a zombie Maggie amongst a mob of walkers in a dark tunnel.

Speaking of the tunnel, shooting a gun in there must be very loud. I hope everyone’s hearing is OK!

Sergeant Abraham seemed to indicate they had two options: walk through the tunnel or walk around it. Apparently another unspoken option was to acquire a car and drive around the tunnel.

I will say that this was a strong episode for Eugene. He reminds me of a smart Kenny Powers. He’s fun. Eugene and Sergeant Abraham have been strong additions to the show. I’m not saying Rosita couldn't also be a strong addition but she'll need to actually do something first.