In a Nutshell
Storm duels Callisto for leadership of the Morlocks.

Plot
In Alaska, Scott and Madelyne are on their first date, when Scott decides to come clean and tell Madelyne about Jean and the shared resemblance between the women. Maddie is initially thrown by the revelation, but decides she likes Scott enough to see where things go. In the Morlock tunnels, the captured X-Men break free and attempt to rescue Angel, but Plague manages to infect Storm, forcing Nightcrawler and Colossus to stand down. Elsewhere, Kitty regains consciousness long enough to convince Caliban to help the X-Men, promising to stay with him in the tunnels if he does so. Meanwhile, Mystique has a dream in which she is hunted by Jason Wyngarde and Phoenix, and when she awakens, she realizes it was a psychic intrusion. She also learns that Rogue has run away from home. 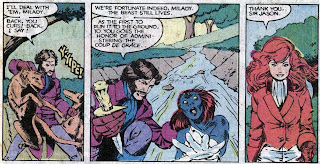 Back in New York, Caliban brings the dying Kitty before the Morlocks. Nightcrawler insists that Kitty needs the advanced medical equipment at the mansion to survive, but Callisto refuses to let them go. Caliban remarks that so long as Callisto leads the Morlocks, her command will stand, prompting Storm to challenge Callisto to a duel for leadership of the Morlocks. Callisto explains that the duel would be to the death, but Storm refuses to back down. The two women engage in a knife fight, which ends when Storm stabs Callisto through the heart. Taking Angel, Storm offers the Morlocks a place at the mansion, but Caliban turns her down, and the X-Men leave. In Alaska, Scott reveals to Maddie that he's a mutant, and tells her he'll understand if she wants to go, but Maddie insists she doesn't want him out of her life.

Firsts and Other Notables
Storm becomes leader of the Morlocks this issue, defeating Callisto in a knife fight for the title. She will technically hold the position for some time to come. Though Callisto survives the attack thanks to the off-panel ministrations of the Morlock's Healer, the fact that Storm struck a killing blow not knowing Callisto could be saved marks a significant change in her character, and is the strongest indicator yet of the effect events in recent issues are having on her.

Following a semi-recurring role as the primary antagonist in Dazzler's solo series, Rogue runs away from her home with Mystique and Destiny this issue, setting the stage for her arrival at the mansion next issue. She's already looking much younger than in her last appearance, thanks to Paul Smith.

Destiny mentions a force which is blocking her perception of the future; I believe this is a reference to the Beyonder, the driving force behind the upcoming "Secret Wars" crossover. 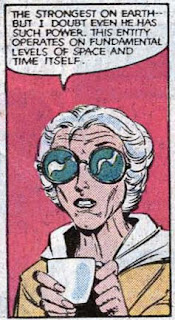 Mystique experiences a weird dream in which she's hunted like a stag by Jason Wyngarde and Lady Jean Grey, a reference to a similar vision of Jean experienced in issue #126. It'll never be made entirely clear, but it's generally considered that this vision was given to Mystique by Mastermind, and furthermore, that Mastermind is behind pushing Rogue to leave Mystique and Destiny. How those actions fit into the plan that will unfold over the next several issues remains similarly unclear.

Though unseen, the first mention is made of the Morlock Healer.

Following his appearance in this issue, Angel next appears in Defenders #125, just prior to that series' re-branding as The New Defenders, beginning what will be a lengthy stint as part of that team that will carry him through to the launch of future X-Men spinoff X-Factor.

I should have mentioned this last issue (when it happened) but the "running figures" in the corner box have been replaced by the more traditional "head shots of the team members".

A Work in Progress
It's made clear in this issue that Maddie is meant to bear an uncanny resemblance to Jean Grey. 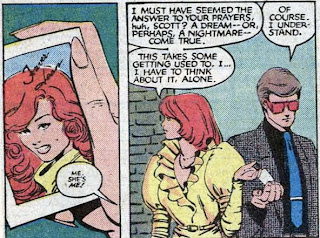 Claremont is also clearly toying with just what to call Maddie, as Scott twice refers to her as "Lynn/e" instead of "Madelyne" or "Maddie".

Kitty promises she'll stay with Caliban in the tunnels if he helps the X-Men, though the X-Men leave without addressing this, which will inspire a future story down the road (in Kitty's defense, she's still pretty out of it when the X-Men leave, and they, of course, have no idea she made such a promise). A narrative caption suggests that Mystique was born in 1953, and even without taking into account the vagaries of Marvel Time, later stories will suggest she's actually older than that.

Callisto explains that she used Caliban's power to sense other mutants to gather the Morlocks.

It's established that Masque cannot use his power on himself. 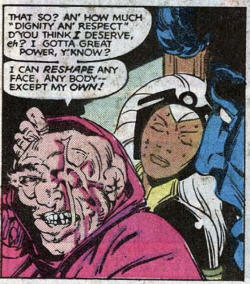 Nightcrawler gives a brief "Good Negro" speech, in which he explains that he won't join the Morlocks because he's fought his whole life to be accepted for his deeds instead of his looks. 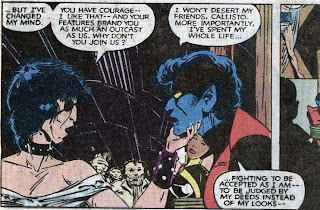 Later, Nightcrawler mentions he's had medical training; whether he's overstating some basic training he's received as part or the X-Men or actually does have some formal training is unclear.

In a (perhaps unintentionally) humorous bit, twice Colossus easily escapes the bonds the Morlocks place him in, even after the second is suggested to be capable on containing him.

Maddie jokes that she knows Scott's favorite breakfast because she's a mindreader. OR IS SHE JOKING?!? 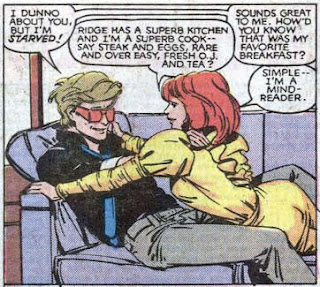 In addition to that bit, there's also some fire imagery dispersed throughout the scenes with Scott and Maddie that are clearly meant to get us thinking about Phoenix. 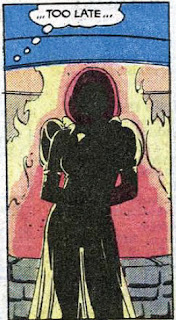 I Love the 80s
As the song they're dancing to ends, Maddie says she should change the tape.

Artistic Achievements
Nightcrawler teleports Callisto throughout the Alley in an effort to knock her out, the depiction of which is contained within the letters spelling out the "bamf" sound effect, a neat visual trick.

Not surprisingly, the entire knife fight between Callisto and Storm is brilliantly depicted, but the opening panels, in which Callisto tosses Storm a knife and she catches it like a badass, prompting a comical reaction from Callisto, are especially good. 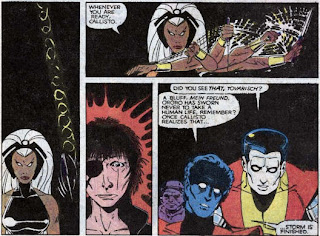 Young Love
Scott and Maddie spend the issue on their first date, after weeks of flying cargo routes together. 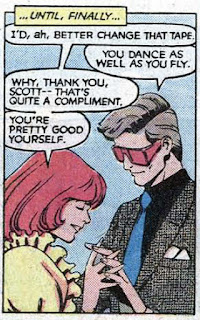 At one point, Scott and Maddie exchange the same "hi/hi yourself" dialogue that Scott shared with Jean. 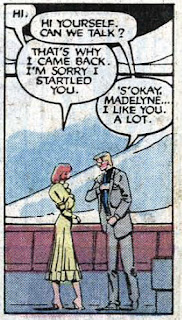 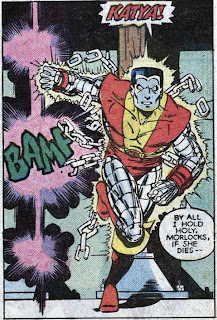 The Awesome and Terrible Power of Cyclops
Cyclops straight up freaks out when Maddie reaches for his glasses. 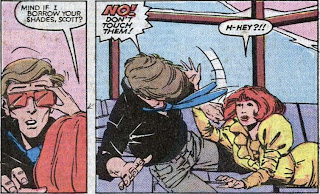 Later, he manages to punch a hole in a quarter to illustrate his power, despite not wearing his visor. 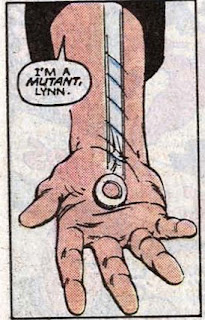 Human/Mutant Relations
The Morlocks have fled underground because they were all persecuted by humans for being mutants, as most of them were unable to pass as normal once their mutations kicked in. 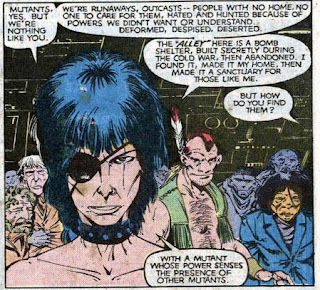 Maddie is aware that mutants aren't very popular at the moment. 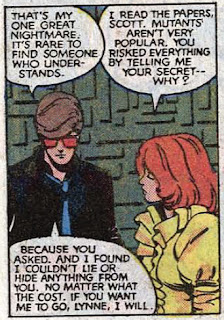 For Sale
I can think of few things that scream early 80s more than a Tron Atari game. 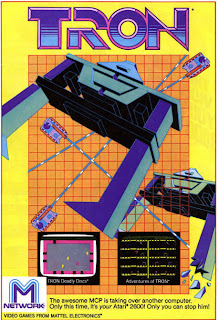 Teebore's Take
With this issue, Claremont wraps up the Morlocks' introductory story, and while the overall purpose of the story is clearly to continue his exploration and deconstruction of Storm's character (by putting her in a position where's she forced and/or willing to break her oath to never take another life), the elevation of Storm to leadership over the Morlocks puts the X-Men in an awkward position, politically and thematically, one which Claremont likely didn't realize at the time. After assuming command, Storm offers the Morlocks a place at the mansion, above ground; Caliban speaks for them all and declines the offer. The X-Men simply accept it (seemingly relieved to not have the ugmos uglying up their mansion...). They extended an offer, it was rejected, and they are off the hook.

But it ignores the fact that the Morlocks can't possibly be psychologically able to accept Storm's offer (even after we put aside the question of whether or not Caliban  is even entitled to speak for the entire community). They've been driven underground by anti-mutant sentiment, and have been so persecuted that they believe they belong underground. It will take more than an offer (not even a command, which she is now empowered to issue) from Storm to convince them to change their ways, yet the X-Men seem uninterested in putting any effort into helping them. Claremont misses an opportunity here for some interesting thematic examination, an opportunity to show the X-Men working with the Morlocks to overcome their self-loathing and change the public perception of mutants, but more importantly, he unintentionally casts his protagonists in an unfavorable light.

Book-ending the events in the Morlock tunnels are two scenes between Scott and Maddie. Time has passed: Scott and Maddie have, off panel, spent several weeks working together, and are on their first date. In what is effectively her first full appearance (after her one panel introduction in issue #168), she learns that Scott is a mutant and that she bears an uncanny resemblance to his dead fiance. Considering that the mysteries surrounding Maddie and her role within the book will be resolved within the next five issues, this is a rare instance of Claremont not teasing out a subplot over the course of months; he clearly has a story to tell, and he's wasting little time in telling it.

Next Issue
Tomorrow in New Mutants #5 we meet Team America (of the not-"F**K Yeah!" variety), and next week the X-Men gain a new member in Uncanny X-Men #171.