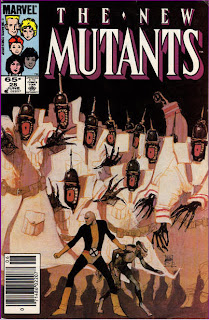 In a Nutshell
Professor X and the New Mutants fight to save Legion's mind.

Plot
Within David Haller's mind, Professor X and Jack Wayne climb a mountain, hoping to reach the Arab who is trying to take control of David's mind. Suddenly, they are joined by the rest of Xavier's companions, though that group is unaware of how they found Xavier so easily. As they climb the mountain, they are attacked, first by fighter jets and then a massive storm. Meanwhile, in the Bermuda Triangle, Lee and Magneto discuss their growing relationship, with Lee admitting she's afraid of Magneto. He asks Lee for help in becoming a better person, but she refuses. Back in David's mind, Xavier and Dani combine their powers to attack the Arab, whom they learn is named Jemail. In doing so, they realize the obstacles in their path are illusory. Piercing the dome thanks to this realization, they discover crystals representing David's memories and personality, many of which have been damaged. Jack claims it to be the work of Jemail, attempting to destroy David's consciousness so he can take over, but Professor X realizes someone has been trying to repair the crystals, something that could only be done by a telepath like Jemail. As Jemail attacks the group once more, Gabby is forced to relive the terrorist attack that shattered David's psyche. She viciously attacks Jemail and overpowers him. Just then, Xavier is felled by a tremendous psychic force, leaving Jack face to face with Jemail. 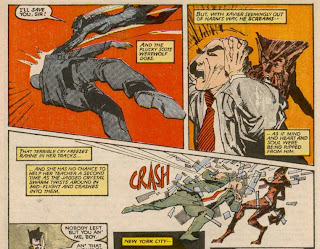 At the Hellfire Club, Empath gives information on Sunspot and Magma to a representative of the Gladiators, suggesting them as potential combatants for their arena. Back in David's mind, Doug stops Jack from killing Jemail, and Dani creates an image of Jack's greatest fear, Xavier and a young David, together and happy, which neutralizes him. Dani confronts Jemail, now able to speak English thanks to Doug's power, who explains that he's been trying to restore David's mind. Now, in light of the damage caused by his fight with Jack, he'll have to take over David's body to prevent him from harming others. Dani offers another way, and Jemail and a reluctant Jack work together to restore the crystals. Later, Xavier awakens back on Muir Island to discover that everyone, including Tom and Sharon, have been freed from David's mind. Xavier meets his son for the first time, and discovers that though David can now express himself, Jack managed to ensure the survival of himself and Cyndi, who now share David's body with David and Jemail. Later, Xavier promises Gabby he will continue to try and help the boy, but wonders to himself if he should even bother, as the psychic force which felled him in David's mind was none other than the Beyonder, who is coming to Earth.

Firsts and Other Notables
The final details of Legion's "origin" are revealed, as we learn how Jemail's mind was absorbed into David's during a terrorist attack, and how Jemail, initially angry, eventually started helping Legion rebuild his broken psyche. 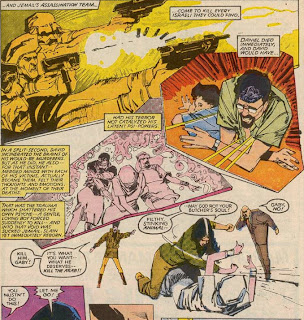 The story ends with David now capable of interacting with the world around him. Though nearly a full grown teenager physically, his mind remains that of a child's, and he shares his body with Jemail, as well as Jack and Cyndi, the two personalities strong enough to resist Jemail's efforts to be integrated into David's mind. Each, along with Jemail, maintains control of their respective psychic ability. 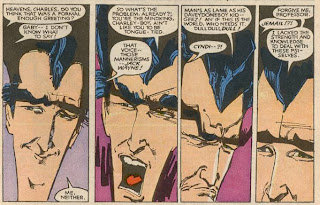 Magneto asks Lee for her help in becoming a better person. He also mentions his children, making this, I believe, the first time he's referenced the fact that he now knows Quicksilver and Scarlet Witch are his kids in one of the X-books (he was made aware of that information in a Vision and Scarlet Witch limited series published not too long before this issue).

Also, the details he gives here of the events which led to his wife fleeing from him in terror will eventually be revised (principally in the backup to Classic X-Men #12); ultimately, it's established that an angry anti-mutant mob attacked his home, killing his daughter, and when his wife saw him kill them in response, she fled in terror along with the unborn Quicksilver and Scarlet Witch. 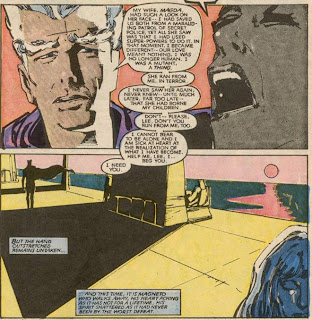 While still inside Legion's mind, Xavier is felled by a tremendous psychic power, and just as in the lead-up to Secret Wars, when he awakens, he attributes it to the Beyonder, who Xavier senses is heading towards Earth, all of which is setup for the first issue of Secret Wars II.

A Work in Progress
Doug objects to Jack Wayne referring to Dani as "Hiawatha", though last issue he compared her favorably to General Custer. 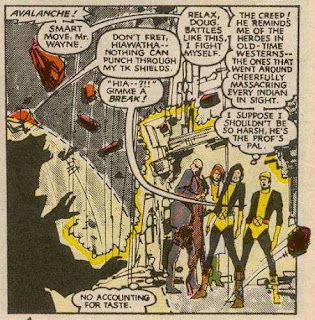 In a subplot scene, the still-depowered Empath hands gives dossiers on Sunspot and Magma to a representative from the Gladiators, the group of mutant fighters from the Beauty and the Beast limited series, setting up the story which begins next issue.

I Love the 80s
Doug references an episode of Star Trek, which gives Professor X the means to penetrate the barrier protecting Legion's mind.

Artistic Achievements
This is my favorite cover of the three issue story. Something about the way Professor X and Doug pop against the background comprised of monstrous soldiers. Also, the way Sienkiewicz is able to express each of David's personalities just via his face in that panel I posted above is remarkable.

"Professor Xavier is a Jerk!"
Don't make promises you have no intention of keeping, Chuck. 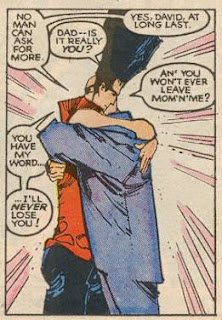 Young Love
Lee freaks out after her romantic evening with Magneto, unsure whether she acted of her own accord or not. 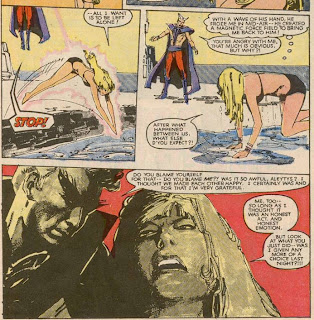 Cyndi continues to hit on Doug throughout the issue.

Teebore's Take
"Legion" concludes in this issue, with the heroes ostensibly saving the day, freeing themselves and their friends from Legion's mind and restoring some semblance of sanity to Xavier's son. As upbeat as this ending is, it leaves Professor X in an uncomfortable position, one which comes to define Legion's character. Here, Xavier swears that his son will never lose him again, yet Legion will never feature as heavily in the X-Men mythos as you'd expect the son of the team's founder would. He pops up occasionally, sometimes even as the central figure in a story, but his appearances are few and far between. Despite his promise, Xavier leaves Legion on Muir Island, and events in upcoming issues of X-Men will lead him to more or less abandon the boy again. The end result is a character who looks, in principle, to be positioned as one of the ongoing narrative's most important figures, becoming, in execution, an afterthought. In the process, one of the narrative's most important characters, in principle and execution, ends up looking like a grade-A jerk.

But all of that lies in the future, and it's important not to blame this story for the failures of others. This issue concludes the arc wonderfully. Sienkiewicz is given one last chance to cut loose in a world ungoverned by conventional physics (for example, as the characters penetrate deeper into Legion's mind, he once again deploys white space to marvelous effect), there's a genuine twist to the story (Jack is actually the personality trying to take control, while the Arab is trying to help David) and, admirably, despite the presence of the world's most powerful telepath, the resolution allows the New Mutants themselves to save the day (Xavier does not swoop in and telepathically fix the problem, but rather a combination of Doug's intellect, Rahne's instincts, and Dani's determination prove decisive). Though future stories will squander the potential of the character introduced by this one, "Legion" stands alongside "The Demon Bear Saga" as a high point of both Bill Sienkiewicz's run and New Mutants as a whole.

Next Issue
Next week, Juggernaut returns in Uncanny X-Men #194, while Dazzler pops up in New Mutants #29. Because no one can get enough Dazzler.
Newer Post Older Post Home
Posted by Austin Gorton at 11:00 AM