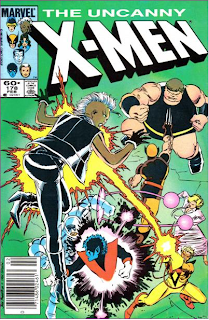 In a Nutshell
The X-Men battle the Brotherhood, and Kitty is seemingly killed.

Plot
Horrified by what happened to Colossus and realizing she's no match for the Brotherhood on her own, Kitty telepathically alerts Professor X. Xavier sends Storm and Wolverine in response, but neglects to tell Rogue about the attack for fear of testing her loyalty too soon. Suddenly, he's hit by a tremendously powerful psionic scanning wave which leaves him wracked with pain. Back in New York, Kitty remembers reading about a recent invention of Mr. Fantastic's that could help Colossus, but when she contacts the Fantastic Four, she's told they're unavailable. Hoping to find the device herself, she takes a cab to the Fantastic Four's headquarters in the Baxter Building. Meanwhile, Callisto, Sunder and Masque find the body of a dead homeless girl, and Masque begins to work on her. Back at Lincoln Center, the Brotherhood attacks Nightcrawler and Amanda, but they manage to hold their own until Wolverine and Storm arrive. 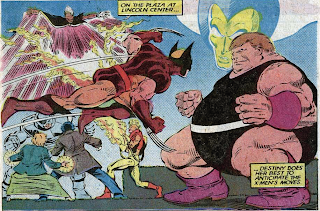 As the X-Men and the Brotherhood fight, Kitty sneaks into the Baxter Building and locates Mister Fantastic's device. Emerging on the roof, intent to air walk over to the next building, she's startled by something behind her and seemingly falls. At Lincoln Center, the X-Men defeat the Brotherhood, at which point Blob reveals their confrontation was just a diversion. At the mansion, Mystique attempts to kill Professor X, but Rogue intervenes, insisting that she came to the X-Men of her own free will, and that she needs Xavier's help to control her powers. Mystique relents, and agrees to spare Xavier's life in exchange for the Brotherhood's freedom. As they leave, Destiny warns the X-Men of dark events surrounding Kitty, while at the Baxter Building, police respond to the apparent suicide of a young girl.

Firsts and Other Notables
For the first time, Professor X is hit by a debilitating psionic wave; this will happen again in future issues (and to characters in other titles), as part of the run up to Secret Wars (we'll learn the scanning wave is being caused by the Beyonder). 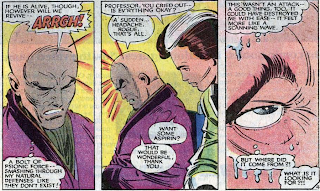 Destiny mentions that she sees Kitty at the center of something ominous; this is clearly meant to emphasize the issue-ending cliffhanger, but given what we'll learn about that next issue (spoiler: Kitty's not really dead. Shocking, I know), it's not clear what Destiny is predicting here.

A Work in Progress
Cyclops mentions, in a letter to Professor X, that he's gotten a job as a pilot for his grandparents airline.

Storm is wearing her cape again in this issue, along with her punk attire. We also get a look at the developing dynamic between Wolverine and Storm, as the later becomes more like the former. 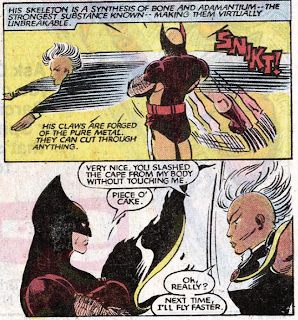 Callisto notes that even if mutants were accepted, she and some of the other Morlocks would still be outcasts by choice, perhaps a further attempt by Claremont to rationalize the X-Men's shoddy treatment of them. 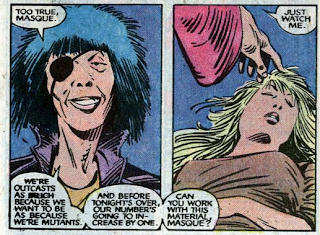 In an amusing bit, Kitty muses that perhaps she can repay Mr. Fantastic for stealing his device by babysitting his kid.

Amanda notes it's a good thing for the Blob that her mother never taught her any death spells; Nightcrawler is glad she didn't. 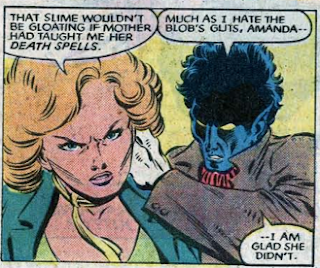 Rogue explains her vendetta against Dazzler, from her appearances as a villain in that title. 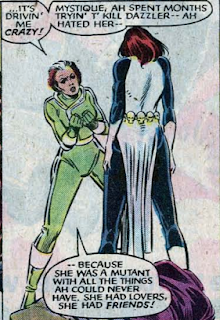 I Love the 80s
That seems like an entirely inappropriate picture of your honeymoon to send to your father-like teacher. Also, who took the picture? 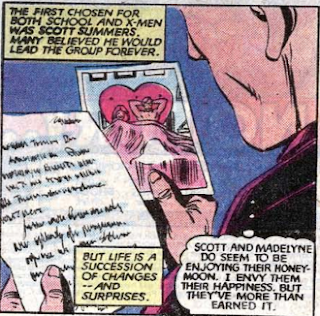 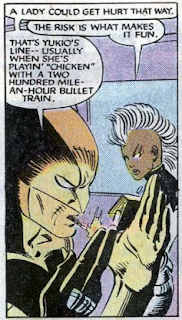 Between issues, Kitty has managed to change from a dress to pants/some kind of jumpsuit. 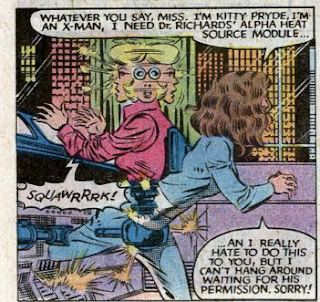 The average citizens of the Marvel Universe are considerably savvy when it comes to sci fi devices.

Young Love
Nightcrawler and Amanda skip the ballet to make out.

For Sale
A James Bond RPG has been advertised in this and the last several issues.


Bullpen Bulletins
The Bullpen Bulletins page features a rundown of the current assistant editors, and it's interesting to see how many of them go on to become notable creators and/or editors in their own right.

It's in the Mail
Angel answers the letters in this issue (most of which pertain to his appearance in X-Men #170), and even he is charmed by Kitty.

There's also a letter from Colleen Doran, a prolific writer and artist and creator of the sci/-fi/fantasy series A Distant Soil.

Teebore's Take
Claremont wraps up the X-Men/Brotherhood fight, and while the action lacks the strong choreography of Paul Smith's action scenes, the end result is at least more of an actual X-Men vs. the Brotherhood fight than we got last issue. Intercut with the actions are scenes with Kitty which setup next issue's story, which will be, like this two-parter, an attempt to clear up a dangling plotline from Claremont's collaboration with Smith. In the end, this two-parter serves to cement Rogue's place on the team. Uncanny X-Men #172-173 integrated her into the X-Men; here, her place on the team is affirmed. Many readers might have wondered, as Kitty does in this issue, if Rogue's placement on the team was part of a long-term plan on the part of the Brotherhood. Rogue's confrontation with Mystique is intended to put an end to any such speculation (it also makes it clear that Rogue's decision to seek Xavier's help was not due to Mastermind's influence, something heavily implied by both issue #170 and the dearth of people who were influenced by him in the course of "From the Ashes"). While her relationship with her villainous mother will remain complicated and, at times, regain the book's focus, never again will Claremont entertain questions of her loyalty to the X-Men.

Next Issue
Tomorrow, the New Mutants finally return to the mansion in New Mutants #13, and next week, we find out whether Kitty is really dead in Uncanny X-Men #179.
Newer Post Older Post Home
Posted by Austin Gorton at 12:00 PM