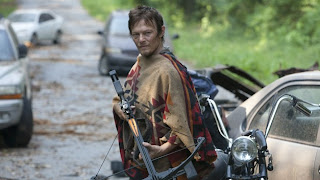 Any episode that followed last week's mini massacre was going to feel like a slight letdown, and sure enough, this episode was the first of the season to really slow down and spin its wheels a little bit. That's probably not a bad thing, because the audience needs a chance to breathe as much as the characters. It also dealt , at least on the prison side of things, with the kind of "how do we function in this world" kind of issues that the show could do well to address more (like getting formula for the baby, a detail I'm glad the show turned into a plot point), while also handing over some time to watching Rick go insane.

Meanwhile, over in Woodbury, Andrea spends ninety percent of the episode continuing to be the dumbest person alive, before finally realizing she's landed in a crazy town and should have left with Michonne (though its debatable if Andrea would have been allowed to leave). Michonne, despite, providing some of the episode's best moments (such as her silent showdown with the Governor), remains problematic. Even in their conversations alone together, we still haven't been given a strong sense of from where her friendship with Andrea is coming. That they've been through a lot together is clear, but there's very little emotional resonance to that, and thus, something that is being sold as a big moment, like Michonne walking out and leaving Andrea behind, plays more like a mild shrug.

Other Thoughts
I really hope the show brings Michonne into the orbit of some other characters soon, because as badass as she is, we don't know enough about the character to care enough to just watch her moving through the zombie-poc alone (especially since we're even less likely to learn anything more about her when she's alone).

I like that Rick had absolutely no dialogue in this episode. It added to the creepiness of his breakdown, and was a classic example of "show, don't tell" in terms of his mental state.

Speaking of, what was he fishing out of that zombie's belly? Lori's ring? Her *shudder* head?

The phone ringing at the end confused me as well. I wasn't sure if it was meant to be some big shocker (like someone is calling from outside the prison), a sign of Rick's insanity (it's not actually ringing), or just Glen or someone guessing where he is and calling from another part of the prison. I'm sure next episode will make it more clear, but as a cliffhanger, it was probably too confusing to be effective (or maybe I'm just overthinking it).

Poor T-Dog. We learned more about him via the conversation between Hershel and Glen (which was great, albeit troubling) than we ever knew when he was alive.

Loved that Daryl had no hesitation when it came to going out to find formula. The following scene between Glen and Maggie was also nice (especially for Glen not freaking out), as was Carl listing the names of all the deceased women who could give their name to his sister. I'd forgotten about a fair amount of them; good to know that Carl hasn't (that said, I hope the baby's name remains "Asskicker").

So the Governor is keeping his zombie daughter alive, making him something of a more insane Hershel from last season, with greater resources. Presumably "Penny" is the daugther, though I'm not sure what all the hashes in the notebook represent.

He's also giving Woodbury entertainment in the form of MMA-style fights where zombies are the cages, which is the thing that finally makes Andrea see how wrong the place is. It also raises an interesting idea: Andrea is right that they shouldn't be making people take the Walkers less seriously, but at the same time, the Governor has a point that people can't live in constant fear. That said, I side with Andrea, and feel like the time for fearless complacency can come when the community is bigger and the zombie problem more under control.

Mrs. Teebore pointed out that Andrea also had a blind spot when it came to Shane last season; maybe she's not dumb so much as easily hoodwinked by a big strong mayun (which is probably worse for her character).

I'm curious about whatever experiment Dr. NotJohnRitter wants to carry out.

Nitpick time: Country Prisoner and New T-Dog (thanks, Dr. Bitz!) mentioned spacing out the Walkers along the fence to keep them from bunching up; I ask again: why aren't they just killing them through the fence?

Also, Glen digging those graves:
A. I thought they didn't want to bury anything in the yard?
B. What, exactly, was he planning on burying?
C. I've said it before, but I'll keep saying it: adhering to tradition when it comes to the burial of the dead in any kind of high risk/apocalyptic situation is beyond dumb.
Newer Post Older Post Home
Posted by Austin Gorton at 10:00 AM