Hope everyone had a good Thanksgiving, and remains pleasantly stuffed!

As you may have heard, Last Resort was cancelled last week, with ABC committing to running the remainder of if its full, initial 13 episode order. I do plan to finish the show out, though as I fell a couple episodes behind, the impetus to catch up is lessened by the news of its cancellation. So even though there's no review of the show in this post, I will get back to it soon and write-up the remaining episodes. 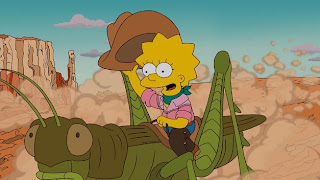 Another perfectly average, unexciting episode, one handed over almost entirely to Steve Carell's new character, who didn't quite fit the aesthetic of the show. Lisa once again gets the subplot, raising some interesting questions about the nature of her vegetarianism (I'm curious what Dr. Bitz thought of it) without really doing much with those questions before the plot was quietly shuffled aside. I did enjoy some of the callbacks to past episodes, like the Pin Pals or the picture of the Be Sharps on the wall at Moe's.

Bart: How about the Disney minority program?
Homer: Now, how would you qualify for that?
Bart: I’m the son of an oaf. 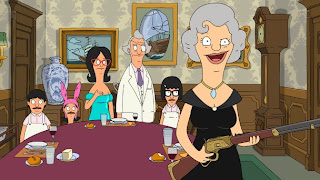 Last episode succeeded on the strength of watching Bob play straight man to all the various loonies aboard the cruise ship; this episode flips that, succeeding on the strength of Bob's absinthe-fueled descent into madness. That the show can transition so effortlessly from one extreme to the other is another sign of just how good it is.

Mr. Fischoeder: Just like I'm going to get into Shelby's parts. Her ladyparts.
Gene: Which are the ladyparts?
Tina: The vagina and the heart.

Bob: I thought the kitchen would be more mansion-y.
Mr. Fischoeder: Mansions are for the owners, Bob, not the cooks.

Louise: If you teach me to shoot, I'll teach you to regret teaching me to shoot. 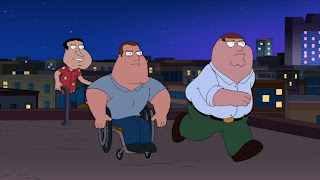 This was one of those tightly-plotted, action/adventure-y episodes the show does every once in awhile, and it's a style it knows well. While perhaps not the funniest episode ever, the cohesiveness of the structure made it entertaining to watch (I also appreciated the acknowledgement of the retcon to Joe's backstory). Plus, the hilarity of Brian trying to take advantage of the cat kneading Lois supplied more than enough laughs for the night.

Joe: What's that supposed to mean?
Peter: Let’s use our eyes to see. 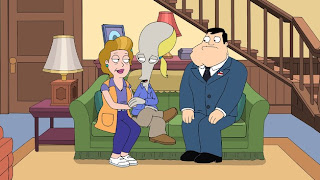 I was fully prepared for the twist to be that both Roger and Stan's mom were in the marriage for themselves, but the real twist turned out to be that Roger was playing his latest character entirely straight - in an effort to become part of the family and express his affection for Stan, he assumed an identity that would allow him to bond with Stan. That's surprisingly sweet for this show, and a brilliant way to create surprise based on our expectations of Roger.

Steve: This just became the best bike ride we’ve had where we didn’t see homeless people having sex.
Snot: So… number six.


How I Met Your Mother: The Stamp Tramp 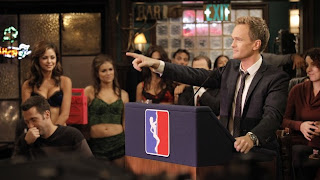 This episode was trying a little too hard to make the whole "stamp of approval" business a thing, but nevertheless, it was nice to have an episode that was more concerned with being funny than with advancing the narrative. A couple moves in that direction towards the end aside, this was otherwise just an effort to tell a few funny stories, and at this stage in the game, those episodes tend to be the more entertaining ones.

Other Thoughts
The whole parody of Lebron James' "The Decision" isn't exactly timely, but here the show also went all in on it, and it paid off.

I enjoy pretentious College Ted far more than present day Douche Ted (who I still enjoy, albeit in small doses). 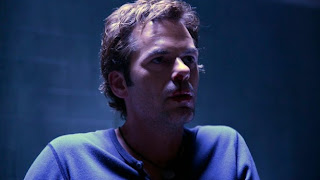 We inch ever closer to an actual showdown with Monroe (and, hopefully, the end of the "search for Danny plot"), and once you gdt past the laughable physics involved in the whole "our air is running out so we're hallucinating" business, the end result was suitably atmospheric enough that the time killing wasn't too bothersome, leaving us with one of the show's best episodes yet. The lack of a flashback also helped, keeping the narrative as confined as the characters once they got into the tunnels, which added to the overall effect.

Other Thoughts
Seriously? That tunnel was huge, and unless every possible entry/exit was airtight, there's no way they'd be running out of air to the point they'd be hallucinating that quickly. I mean, I'd think the torches would burn out long before that happened.

Also in the nitpick department, when Deep Cover Guy turned around the corner to shoot at Charlie and Katniss, why didn't Miles use that opportunity to whip the sword he still had on his belt and slice the guy in the back?

I love that NBC made a big deal out of promoting this episode as "featuring the music of Led Zeppelin", and then they used two songs.

I'm surprised it took Monroe as long as it did to send someone after Miles considering that we now know his desertion followed an assassination attempt.

In other mythology news, Rachel's demonstration of the pendant's range was pretty nifty.

Rachel stabbing that guy at the end of the episode was probably my favorite moment on the show so far. "Now you need me" was pretty badass. It'd be nice if her daughter was that decisive (though I did appreciate Charlie's crossbow shot).

Miles: Probably walking straight into a militia ambush.
Aaron: Well, that’ll be par for the course at least.


Top Chef: A Shock at the Space Needle 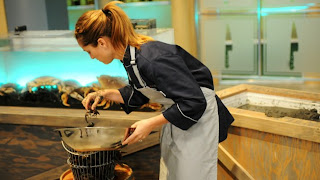 I don't follow the news for this show very carefully, so maybe everyone knew going in that some old veterans were going to show up and join the new cast, but I was pretty surprised by it. That's a pretty clever idea, giving the season a little bit of the All Star flare while still adding new contestants to the mix. While I'm not surprised to see Stefan (who was a fan favorite and a villain) or CJ (another fan favorite many felt left too soon) again, Josie seems like an odd choice; she strikes me as the "we needed one more and she was the first who answered our call" selection.

Other Thoughts
Loved Padma going all school teacher on the guy who was taking over her during the Quickfire.

Contestants who bug me already: Josh, of the waxed mustache. Contestants I've taken an inexplicable shine to already: Bart, the Belgian Knight.

Tom vs. Emeril: Turkeypocalypse
So generally speaking, I loathe it when Top Chef decides to have the contestants pretend it's a holiday even though the episode is being filmed months before the actual holiday, but this time it was totally worth it just to see Padma's complete inability to not laugh whenever anyone remembered to say "happy Thanksgiving". The challenge itself was fine; it was good to see the contestants given an opportunity to stand on their own this early in the season, when we usually get a ton of smaller team challenges (like last episode). And having Tom and Emeril dive in and guide the teams was a fun touch; I'd like to see them shake up the challenges with stuff like that more. 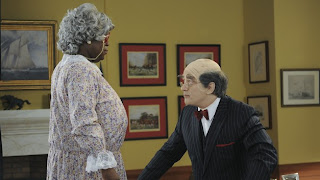 I've mentioned before that I can pretty much take or leave Hazel, despite my appreciation for Kristen Schaal's talents (see: Bob's Burgers), but for me this episode was all about the Tracy/Jack confrontation, showcasing the most inevitable step in Tracy's decision to become a Tyler Perry-like mogul, starring in a series of cross dressing comedies a la Madea, as well as continuing this season's efforts to suggest that Tracy is smarter (or at least more cagey) than he's let on. The scene of him calmly shooting down Jack's libel arguments was probably my favorite Tracy moment since he was unable to shoot that commercial for the Boys and Girls Club.


Parks and Recreation: Leslie vs. April 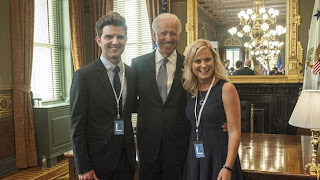 Nobody in the world of single-camera comedies is better at the deadpan look to camera than Adam Scott. The look he shot while Leslie gushed over Biden was absolutely hilarious, and just one of several such looks he gave throughout this episode. The main thrust of this episode focused on Leslie and April (and was a great examination of their relationship), but like 30 Rock, for me, the subplot (the Ben/Tom stuff) served up the biggest laughs.

Other Thoughts
Lots of neat callbacks to the show's beginnings, from Leslie's political ambitions (which have always seemed off, given her love for her hometown) to the old lot 48, the driving force of the show for its first season and a half. Nice to see it back in the spotlight.

Andy as a security guard probably makes more sense for the character (and is more realistic), but I think I'll miss never seeing him as an actual cop, because that would have been hilarious.

Ron: Breakfast food can have many purposes. 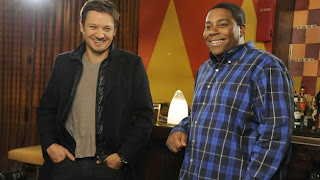 Man, I like most of what I've seen Jeremy Renner in, but he is not cut out for sketch comedy. After one of the most awkward opening monologues I think I've ever seen (and, granted, the technical problems weren't his fault), he just never found a rhythm, and any success this episode had was in spite of him, not because of him.

Other Thoughts
Case in point: I really wanted to love that Avengers sketch. I mean, it's right in my wheelhouse, it was fun to see who got cast as which character (Bill Hader had a pretty good Chris Hemsworth voice), and there was a certain charm to the low budget interpretations of the costumes and action. Yet Jeremy Renner, playing the same character he played in a movie, made the whole thing feel really uncomfortable, and managed to flub the punch line. Oy.

Again with The Californians! It's clear the cast loves it (and watching Armisen and Hader fight against breaking throughout made this one more entertaining than usual) but give it a break already.

The episode wasn't helped out by a low key, thinly-premised cold open; the Situation Room sketch later on handled the Petraeus scandal much better (and featured some of Renner's strongest work of the night).

Favorite Sketch: I really enjoyed the "visit your hometown" ad ("Unwind in front of the deepest TV ever sold!"), and thought "The Standoff" digital short was pretty good too, but I'll give the honor to the last sketch of the night, with Renner guessing the identity of his not-actually-dead brother. It was one of those bizarre end-of-the-night sketches that either lands or doesn't; for me, it landed.
Least Favorite Sketch: The Californians. 'Nuff said.