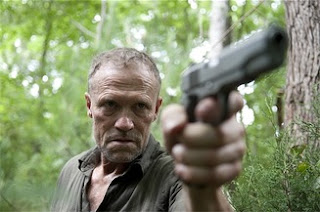 One of the advantages of the way the show has opened itself up this season is that in episodes with multiple storylines, the ones that are duds are buoyed by the more successful ones (a condition plenty of other shows have used to their advantage, but one which Walking Dead has struggled with because its narrative had been so insular for so long). As a result, even though the ongoing adventures of Andrea, the Colossally Stupid Girl continued to fall somewhere between "boring" and "actively irritating", they were a lot more tolerable when it was only a matter of time before the narrative would return to Rick's telephonic breakdown or the Merle/Michonne hunt (for the record, if I had to rank the storylines in this episode, from least engaging to most, it would go Andrea/the Governor, Rick's phone calls, Daryl, Carl and New T-Dog cleaning out the prison, and the Merle/Michonne stuff).

This episode also showcased the show's new found sense of pace, as Glen and Maggie's abduction and Michonne's arrival at the prison bring the two disparate settings together much sooner than I expected. In past seasons, it wouldn't have surprised me at all for the show to go into its winter break on those two events - leaving us to spend the hiatus imaging the horrors in store for Glen and Maggie and wondering how Rick would mount a rescue. But we're now two episodes out from that break, suggesting we could very well see the first round of Rick vs. the Governor before the back half of the season. At the very least, its an indication of the show's new found commitment to keeping the narrative moving at a relatively brisk pace.

Other Thoughts
I was glad to see that Carol was indeed alive (I totally bought into Daryl's belief at the end there that she was a zombie). That, combined with Rick returning to sanity and meeting his daughter along with Michonne showing up with a basket of formula, was one of those rare moments of the characters winning one that the show needs on occasion to keep things from getting too bleak (even though Michonne's arrival also reminds us that we've got an episode of Merle-torture ahead...).

I'm also glad Carol's alive because I'm hoping she'll be the reason Daryl sticks with the group and not his brother.

I kinda want to call shenanigans on Michonne somehow happening upon the prison (obviously, she overheard Glenn and Maggie, but it's still pretty amazing she found it as quickly as she did, considering Rick and company spent months wandering around it without realizing it was there), but the closing scene of her walking up to the fence carrying the formula amidst the zombies was such a great image that I'll allow it (and kudos to the show for re-establishing that covering yourself in zombie stank lets you walk amongst them earlier in the episode. The whole "she cuts out a zombies guts - realizes they'll leave her alone now - uses that to get close to the prison" sequence was really executed. On their own, each doesn't lead to the other, but in hindsight, they form a perfect chain of events).

Less well executed was Merle's continued hunt of Michonne after he killed "Neil" for suggesting...they continue hunting her. Unless the idea was supposed to be he wanted all the glory for himself?

I never thought it would be possible, but I'm pretty sure Carl out-badassed Daryl in the course of their conversation about dead moms. All in all, that was a really good scene between the two of them.

Similarly, the scene between Hershel and Rick was very well played, with Hershel clearly getting the vibe that Rick was crazy but letting it play out without comment.

Any ambiguity about whether Merle was still Merle was effectively eliminated in this episode, and that's probably for the better, though I do appreciate that there's still some ambiguity regarding just how loyal he is to the Governor.
Nitpick time: I understand the real answer is "to make for a more dramatic reveal later in the episode", but why in the world would Daryl say "eh, I'll come back and kill this weak zombie later" instead of opening the door and killing it on the spot, especially if, as far as Daryl was concerned, it wasn't going to put up a fight?

Also, it's frustrating enough in other genre stories when characters with a gun refuse to try for a headshot on the guy holding someone they care about hostage, but it was especially frustrating in this episode, considering how close Glen was to Merle, and the fact that everyone on this show is already uncannily good at shooting people in the head. You can do it when a zombie is advancing on you, but you can't do it when Merle is a couple feet away and not really moving?