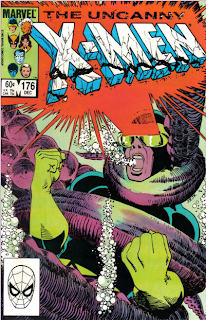 In a Nutshell
Cyclops and Madelyne are attacked by a giant squid on their honeymoon.

Plot
In the South Pacific, Scott and Madelyne are flying their seaplane towards their honeymoon destination, hoping to avoid an oncoming storm. As Scott contemplates his father's offer to join the Starjammers, the plane is suddenly struck by lightening, sending it crash towards the ocean. Meanwhile, in Japan, Wolverine visits Mariko, asking why she sent him the Yashida Honor Sword. She explains that while it is his by right, she refuses to marry him until she's severed all the criminal ties she forged while under Mastermind's influence, thus restoring her family's honor. In the Pacific, Scott and Maddy work frantically to repair their plane before the storm blows in, with Scott narrowly avoiding a shark attack. In Washington DC, Henry Peter Gyrich attends a meeting held by the president's National Security Adviser, during which the NSA's assistant, Val Cooper, gives a presentation discussing the imbalance of power between nations created by mutants. She urges the government to consider drafting mutants to work for them, something Gyrich worries would only trigger further attacks from mutants like Magneto.

In the Morlock tunnels, Caliban returns home to find Callisto, Masque and Sunder waiting for him. Callisto tells him she intends to ensure that Kitty Pryde honors her promise to stay with Caliban. In the Pacific, Scott and Maddy finish their repairs as the storm intensifies, but Maddy is suddenly dragged underwater by a giant squid. Scott dives in after her, and blasts the creature, freeing her but losing his glasses in the process. Maddy helps guide him back to the plane, where he dons his visor. Safely aboard, they fire up the engines and manage to take off before the waves from the storm capsize the plane. Back in the air, Scott declares his intentions to stay on Earth and simply enjoy his life with Madelyne.

Firsts and Other Notables
Valerie "Val" Cooper makes her first appearance, as an assistant to the president's National Security Advisor. She will become a significant supporting character during Claremont's tenure, and remains one to this day.

Her comments here regarding the need for the US to back its own group of mutants is a setup for the eventual creation of the government-sponsored Freedom Force, though it's likely that at the time, Claremont wanted the readers to think Val had the X-Men in mind. 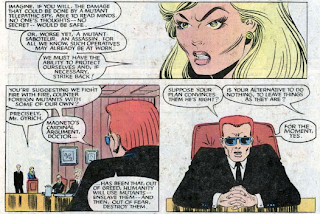 Similarly, the interlude with the Morlocks is setting up the events of issue #179.

This is John Romita Jr.'s first full issue as the regular penciller of the book.

The first issue of X-Men Classics, a limited series reprinting, on higher quality Baxter paper, the Roy Thomas/Neal Adams run on the title, went on sale the same month as this issue. It is a precursor to the later Classic X-Men series which will eventually reprint a good chunk of Claremont's run (including this issue).

A Work in Progress
Cyclops decides, having experienced enough fighting and near-death experiences, to enjoy his life with Madelyne and not join the Starjammers. 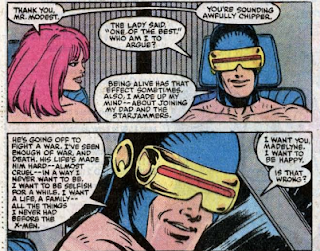 It's revealed that Callisto, Caliban, Sunder and Masque founded the Morlocks. 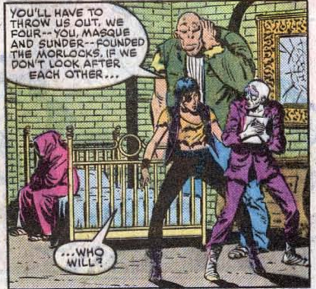 It's made clear that Mariko's actions in issues #172-173, including her rejection of Wolverine, was due to Mastermind's influence, an influence Professor X has since eliminated.

I Love the 80s
Scott is rocking some pretty rad cutoff jean short-shorts throughout the issue. 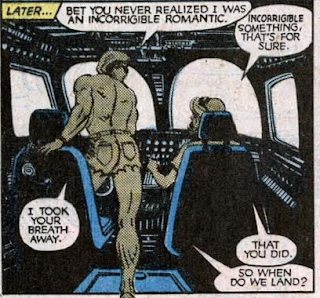 Similarly, Maddy spends most of the issue in a bikini, a condition which was not lost on Teenage Teebore... 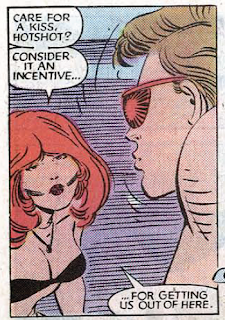 The animal which attacks Scott and Maddy is referred to as a squid, yet Romita has clearly drawn an octopus. 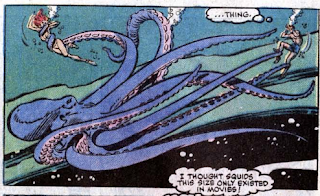 Artistic Achievements
This is one of my favorite X-Men covers.

Young Love
Free of Mastermind's influence, Mariko still refuses to marry Wolverine, insisting that she needs to restore her family's honor, on her own, before she'll be worthy of marrying him. 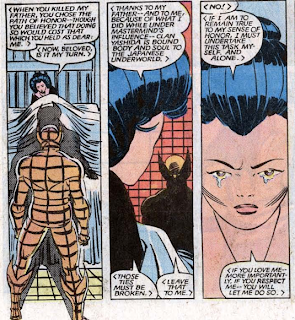 Like a Phoenix From the Ashes
Madelyne makes a joke about how it's too bad she isn't really Phoenix, for which Scott promptly scolds her.

Human/Mutant Relations
Val Cooper mentions the idea of mutants supplanting humans biologically, then goes on to say that the real problem with mutants these days is the possibility that other governments are using them against the US, and that the US needs to do the same. 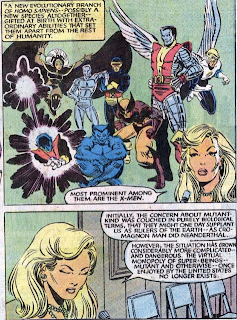 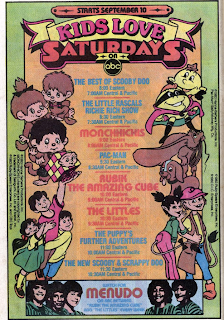 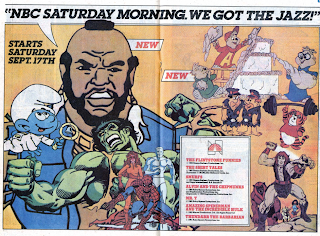 It's in the Mail
Instead of a letter column, this issue features an odd letter from Jim Shooter discussing the cover. 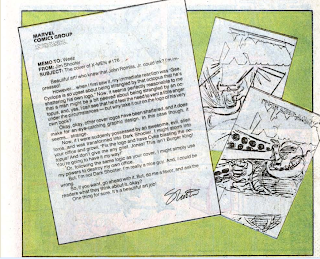 John Romita Jr. on being assigned X-Men
"The editors wanted someone to fill the gap temporarily until they brought in another regular artist. They thought I could handle it from my previous work at Marvel and asked me to fill-in. I filled the gap and ended up staying on for a pretty lengthy run."

Chris Claremont on John Romita Jr.
"I think Johnny, at the point he was drawing the book, was still a work in progress, He was evolving into the Johnny we know today...While his term on X-Men was successful, I think it was more along the lines of refining his craft and planting the seeds  of what was to blossom into something really magnificent on other books. We were sort of like Johnny's farm team."

John Romita Jr. on Chris Claremont
Chris had worked with John Byrne and now Paul Smith and Dave Cockrum and I was relatively inexperienced compared to these guys. I'm sure Chris, without any malice in his heart, just preferred other people. It's funny, but now that Chris and I are friends I don't think of it in any bad way. I'm sure at the time I probably gritted my teeth a little bit, maybe took an extra shot of whiskey at night [laughs]

Teebore's Take
I called last issue Cyclops' swan song on the title, but this issue perhaps deserves that distinction more. While it doesn't feature the tour de force of Cyclops single-handedly defeating all the X-Men, it does feature Cyclops' last regular appearance in the title for some time, resolution to the lingering question of whether he'll be joining his father aboard the Starjammer, and the best showcase yet for his relationship with Madelyne. Thankfully for anyone who isn't as big a Cyclops fan as I am, Claremont also works in a handful of subplot scenes, wrapping up past plot points and setting up future ones (including the introduction of Val Cooper, who in addition to becoming a significant and long lasting supporting character, plays a role in the continued re-contextualization of the human/mutant conflict begun in earnest in "Days of Future Past"). The end result isn't quite in the model of the Claremont/Smith "all subplot and character development" issues that appeared regularly over the last dozen issues, but it is close enough to indicate that Claremont isn't abandoning his looser, day-in-the-life narrative approach just because Paul Smith left.

Next Issue
New Mutants #11 finds the kids still in, you guessed it, Nova Roma, while Uncanny X-Men #177 features the return of the Brotherhood of Evil Mutants.
Newer Post Older Post Home
Posted by Austin Gorton at 9:00 AM