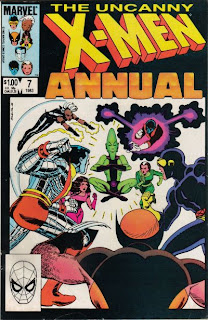 In a Nutshell
The Impossible Man leads the X-Men on a zany scavenger hunt.

Plot
The X-Men are playing baseball when a massive space ship appears in the sky above them, from which Galactus emerges. He declares that he requires the X-Men's domicile, then disappears along with the X-Mansion. With Professor X's help, the X-Men track Galactus, whom Xavier believes isn't truly Galactus, to the SHIELD Helicarrier, where Nick Fury's eyepatch is stolen. Next, the X-Men track the alien to the Savage Land, where Ka-Zar's sabretooth tiger, Zabu, has been stolen. Back in New York, the Wasp's costumes are stolen, leading to a tussle between She-Hulk, Iron Man, Colossus and Rogue, while Dr. Strange's sigil window is stolen. At the Hellfire Club, the X-Men battle Sebastian Shaw as the alien steals the Black Queen's costume. Finally, the X-Men chase the alien through the offices of Marvel Comics, eventually cornering him and overpowering him when Rogue attempts to absorb his power, at which point he reveals himself as the Impossible Man of the planet Poppup.

He explains that all of the items he's stolen were taken as part of a scavenger hunt, and takes the X-Men to his cache. There, he explains that the scavenger hunt is a contest amongst his family to determine which of them will be in charge of their new planet. Just then, a cabal of aliens from across the galaxy arrive, determined to claim retribution on the Impossible Man for similar thefts across their worlds. In order to avoid Earth being destroyed in the resultant conflict, Lilandra mediates a settlement, forcing the Impossible Man and his family to return all the stolen items in their original condition once she's determined a winner of their contest. Later, the Impossible Man commiserates with Kitty and Illyana, having failed to win the contest, by enjoying his first taste of ice cream.

Firsts and Other Notables
The "villain" of this story is the Impossible Man, an alien from the planet Poppup with shapeshifting abilities (he makes a "pop" sound every time he shifts forms). He first appeared in the early issues of Fantastic Four, as more of a troublesome, comedic foil than a villain, and has continued in that vein. His scavenger hunt in this issue leads to guest appearances from a number of Marvel characters.

After issue #110, this is issue features the second instance of the X-Men playing baseball. 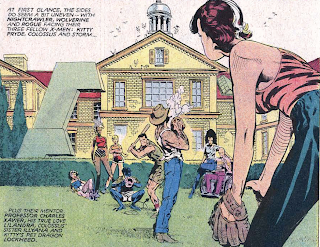 Technically, the events of this issues are considered to occur between the pages of X-Men #175, following Mastermind's defeat and before Scott and Madelyne's wedding (presumably, Scott and Madelyne are off preparing for that, which is why Cyclops only appears on the cover).

It's revealed that White Queen's coma was caused by Mastermind. 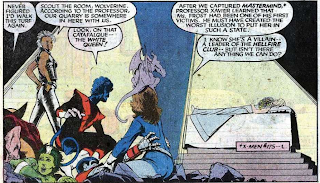 At one point, Kitty asks rhetorically of the Wasp how any one woman can own so many costumes, then wonders if she'd mind if Kitty borrowed some, an acknowledgement by Claremont both of Kitty's own predilection for switching costumes and the fact that he borrowed the bit from the Wasp, another super-heroine who often changed her costume.

Dr. Bitz will be pleased to know that Dr. Strange makes an appearance, when the Impossible Man steals the sigil window on the roof of the Sanctum Sanctorum. 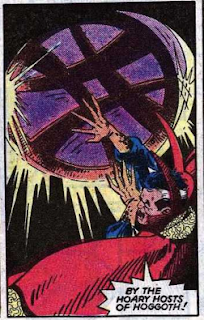 The Iron Man which appears in this issue is actually Tony Stark's friend and pilot, James Rhodes (the future War Machine), who at this time was filling in for Tony as Iron Man (and trying to pass himself off as the "real" Iron Man) due to Tony Stark's out-of-control alcoholism. 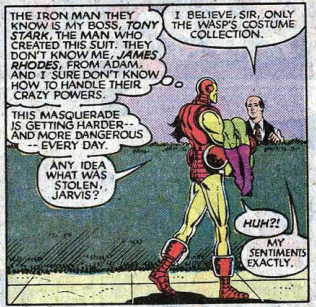 The issue closes with a final page in which assistant editor Eliot R. Brown explains that the book fell under his control while Louise Jones and the other editors were in San Diego for Comic-Con; though it isn't announced as such, this makes the book part of "Assistant Editor's Month", an annual "event" at Marvel in the 80s which usually resulted in comedic or offbeat stories, presumably crafted the previous July while the editors were away at Comic-Con.

A Work in Progress
Kitty is wearing yet another new costume. 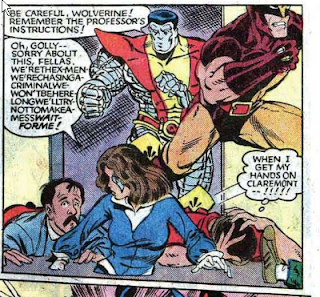 This issues also constitutes her first trip to the Savage Land (though she got close in issue #149). 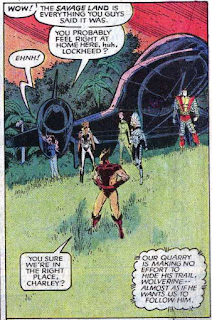 Lilandra is once again wielding a lightsaber. 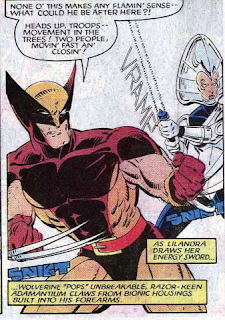 When She-Hulk sees Rogue fighting alongside Colossus, she assumes that one of them must have switched sides. She's right, though of course she believes that it's Colossus who's gone bad.

Kitty notes that even though White Queen is a villain, she wishes there was something the X-Men could do to help her, a sentiment that doesn't quite gel with later depictions of Kitty having always had a particular hatred of the White Queen. 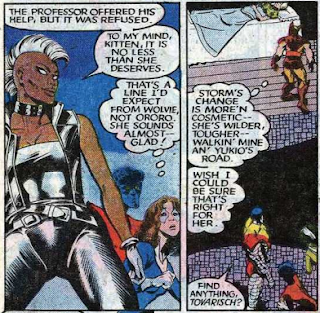 Rogue references her last encounter with Shaw; as far as I know, this is the first meeting of the characters, so this may refer to an as-yet-unrevealed encounter between the two prior to Rogue joining the X-Men. 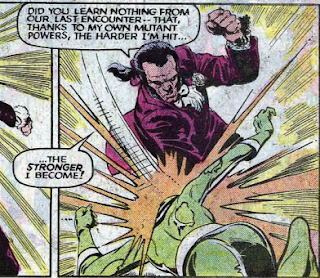 This issue reveals that the Blackbird has been equipped with a cloaking device courtesy of the Shi'ar.

There is some discussion about whether Rogue would be able to absorb Colossus' power while he's armored up, as Rogue's power works on flesh, but Colossus' armor is comprised of organic steel. 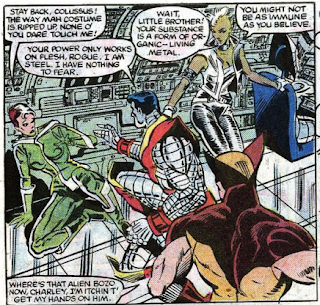 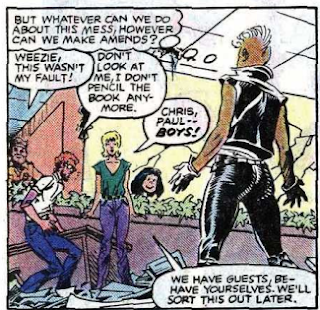 Amongst the Impossible Man's stolen items are the Millennium Falcon, the key to Superman's Fortress of Solitude, and the giant penny from the Batcave. 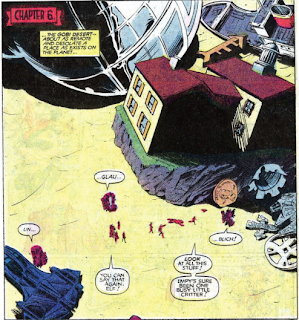 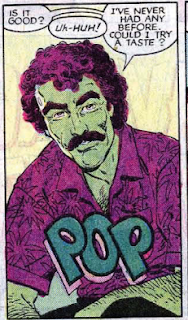 Illyana also pops up at the end of the issue, once again wearing a bikini (Kitty is wearing a more sensible, albeit hideous, one piece). There's also some business with Kitty and Illyana enjoying bomb pops in these final panels that may also constitute a further ill-advised attempt to sexualize the fourteen-year-olds, but I'd just as soon ignore all that. 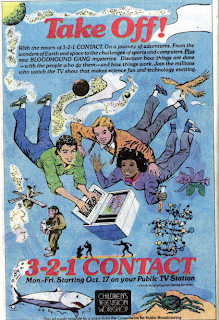 Most likely hoping to duplicate its success with stuff like Star Wars, Rom and Micronauts, Marvel made a big push for a line of The Saga of Crystar toys (complete with a tie-in comic), though I've only ever seen them as ads in Marvel comics. 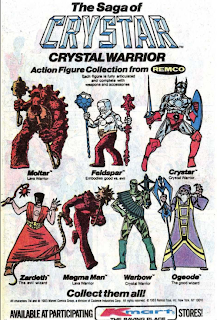 Teebore's Take
Thus far, none of the X-Men annuals have proven to be particularly relevant to the narrative of the main title, nor very good. This annual continues that trend, though it willingly eschews any attempt at relevancy in the interest of comedy. However, whimsy...isn't Claremont's strongest suit, and the end result falls somewhere between "tedious" and "annoying", with the X-Men spending the issue chasing the Impossible Man from location to location, while the various antics of the alien along the way remain painfully unfunny. Michael Golden, who is capable of much stronger work, turns in a cartoonier look in an effort to support the humor, but he's let down by the inconsistencies that come with a small army of inkers. There's some amusement to be had from the fourth-wall breaking antics in the Marvel Bullpen (simply because you simply wouldn't see that kind of thing anymore), but everything else is eminently forgettable.

Next Issue
Scott and Maddy have an unexpected guest on their honeymoon in Uncanny X-Men #176, while Magma goes to town on Nova Roma in New Mutants #11.
Newer Post Older Post Home
Posted by Austin Gorton at 3:00 PM