Things in TV Land should pick up next week with the start of November sweeps, though we did get a lot of good Halloween episodes (I love Halloween on TV because all the costumes are unrealistically elaborate and everyone can trick-or-treat in temperate, not-near-freezing weather). In addition to what I write about below, I did watch the Halloween episodes of Modern Family, Suburgatory, Big Bang Theory and Happy Endings. I don't have much to say about them (other than to say that you should be watching Happy Endings, the best non-Parks and Rec and Community comedy on TV) but feel free to bring them up in the comments if you're so inclined.

Once Upon a Time: The Doctor 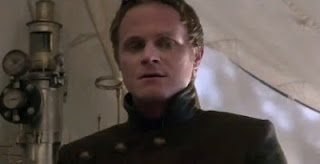 The revelation that Dr. Whale is Dr. Frankenstein (clever naming, by the way) opens a whole new avenue for this show. While it's already dipped its toes into the characters of public domain novels, in the forms of such characters as the Mad Hatter and Captain Hook, most of those dalliances involved characters with some ties to Disney. Frankenstein is the first literary character the show has used without any strong connection to the world of fairy tales and/or Disney. It opens a (potentially) troublingly deep well of characters, but with this episode making clear something the show has hinted at before, that there are all kinds of different "realms" (some a conglomerate of stories like Fairy Tale Land while others represent a specific fictional story like Wonderland or Neverland), each accessible by various magical items (like the Hatter's hat), with Storybrooke/the real world as just one more such realm, I think this expanded well of characters can ultimately work to the show's advantage. So long as the writers continue to find new and clever ways to re-imagine the characters and work them into the ongoing narrative (and in the case of someone like Dr. Whale, explain why he got pulled into Storybrooke by the curse that was placed on FTL), I have no objections to seeing a wide and varying range of public domain characters pop up on the show.

Other Thoughts
Though the idea that potentially all fictional worlds exist as one of numerous realms further complicates the question of how "our" realm/the real world/the realm in which Storybrooke resides came to depict these other realms as fictional stories, particularly when the events occurring in, say, the Enchanted Forest are happening simultaneously to the events of Storybrooke, while Frankenstein's story is rooted to a very specific time that mimics a very specific time in the "real" world, despite Victor having interacted with Regina just roughly 30 years ago in Storybrooke/FTL time.

After being annoyed to hell by her first adventure in FTL, it was nice to see Emma be a little less grating and immediately cotton to Hook's ruse.

Some decent character work with Regina in this episode; I continue to enjoy what the show's doing with her so far this season. I'm kinda jonesing for a Regina/Cora magic showdown in Storybrooke with Regina on the side of the angels.

That said, the whole "Henry gets a horse" and the resultant "Daniel attacks him at the stables" bit was pretty weak sauce.

I would love for the show to reveal that all the various Universal monsters, like Dracula and Wolf Man, exist inside Frankenstein's realm.

Rumpelstiltskin mentioned magic slippers, making a trip to Oz seem more and more likely. Was the crystal ball the Hatter brought back instead something from something (if you know what I mean), or just, you know, a random crystal ball? I wasn't sure. 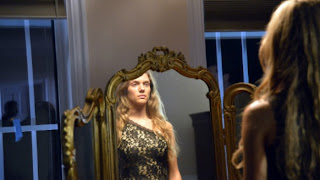 This one fails squarely into the realm of "treading water"; nothing terribly bad, but nothing terribly important to the plot either. It makes sense to address Nora's injury, we got a little bit of setup for the show's presumed new big bad (now that Neville's been promoted), and it was interesting to watch Charlie's developing edginess (you guys, she tore up her postcards!!!!), but little of this added to the show's overall narrative. Which is fine, on occasion, but hopefully the onset of November sweeps will bring back some of the momentum established by "Soul Train".

Other Thoughts
Aside from his episode-ending reunion with his mother (which just amounted to a hug), even Danny's story was treading water; after arriving in Philadelphia last episode, in this one he essentially arrived in Philadelphia more.

I would totally be the Aaron of any apocalypse. Mrs. Teebore says that's okay though; she'd take care of us.

That said, his dispatch of Drexel was pretty awesome (even though, despite what TV and movies have taught us, I'm pretty sure a bullet from that gun at that range would have shredded his flask). 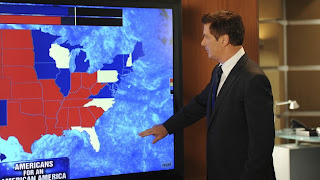 Not surprisingly, 30 Rock eschewed a Halloween episode (and put aside its larger overarching plots) in favor of a two-part political episode, one that mined a fair amount of laughs out of not just the current candidates, but the political system (specifically, the electorate) in general. The climax of which is Jack and Tracy's duel rundown of which states will vote for which candidate (Pennsylvania is going for Obama because the voting machines are sentient and ruling in favor of gay marriage) which was hilarious and (sentient voting machines aside) kind of spot on. Plus, I will never not tire of any reference to Florida as America's penis.

Other Thoughts
I also really enjoyed Jack's mounting terror at the notion that money can't buy all the votes, and his subsequent Romney ad aimed at African-Americans (featuring a hilariously-pained Don Cheadle and Jazz, the "black" Transformer).

Plots involving Frank and/or some combination of the writers usually do little for me, but their attempts to prank Jenny made for a decent B-plot. And the idea that Kellen Lutz is Lutz's nephew was amusing. 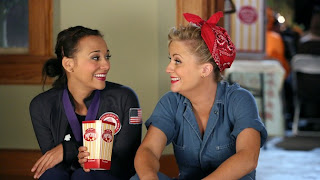 To say this was the first character driven episode of Park&Recs' season sounds odd, because this is a show that does a masterful job of grounding even its whackier antics in its characters. But this was the first episode of the season without any major plotline (ie no bill to pass, no outdated law to fight, etc.), allowing us instead to just hang out with the characters while Ben and Leslie struggle with their future together and Ron tries to come to terms with dating a normal woman with little girls, with the idea of organizing a rummage sale for Jerry giving events a loose spine on which to hang. All of which leads up to a fantastic ending, in which Ben surprises Leslie with a proposal, and Leslie, true to character, hilariously won't let him finish until she's memorized the moment. It was a terrific bit of acting on the part of both Poehler and Scott, and a wonderfully sweet moment.

Other Thoughts
Ron's pirate costume is the same one he wore in the show's previous two Halloween episodes.

Loved April bolting out of the office when given the chance, though I wouldn't have minded seeing her and Andy's reunion in Pawnee.

I love that the joke regarding Chris' costume (that he went as his greatest fear: old Chris) went unstated.

Of all the boxes of boyfriend stuff Ann had, there wasn't a box for poor forgotten Mark.

I hope the show is setting up Tom's new idea for a rent-a-swag company to succeed; the poor guy deserves a win, and unlike Entertainment 720, this isn't such a bad idea. 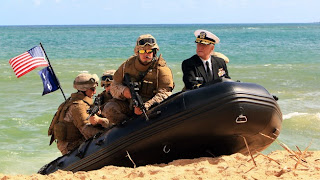 Maybe I'm just a sucker for scenes of intense negotiation, or stories where a leader finally wins the respect of their followers, but this was hands down the best episode of the series since the pilot. Even more importantly, it put the conspiracy story front and center, even finding a way to make Marcus more aware of it as well. The show's episode-by-episode narrative and overall goal (beyond the vague "expose the truth") going forward isn't any clearer than it was after last week's episode, but if the show can keep churning out episodes like this, I'm fine just going along for the ride.

Other Thoughts
Nice to see Not Sawyer involved in some non-Gelfling action again.

I also gained a ton of respect for both Jesse Schram's character and the writers for making it clear from very early on that she isn't buying what her lawyer friend is selling.

The constant sniping between Grace and the COB aboard the sub was a lot of fun. I'm glad she gave as good as she got.

I doubt the show can put Marcus in the same room with Washington power players/elements of the conspiracy like it did in this episode very often, at least not without stretching credibility, but hopefully they find a few more plausible ways of doing it in the course of the series.

Things are getting worse in the outside world: the UN condemned the US attack on Pakistan, China is invading Taiwan, gas prices are skyrocketing. I like these little glimpses of the bigger picture.
Newer Post Older Post Home
Posted by Austin Gorton at 9:00 AM