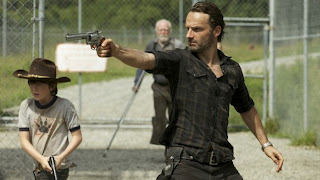 In terms of plot progression, not a whole lot happened in this episode. Woodbury learned about Rick and company clearing out the prison, and the prison folk learned about Woodbury, but in terms of moving the overall narrative forward, that's about it. However, as the penultimate episode of the fall half of the season, the end result was an excellent exercise in increasing tension. With Rick, Daryl, Michonne and New T-Dog poised on the outside of Woodbury, with Glen and Maggie of no more use to the Governor on the inside, with Merle still a bastard but likely to choose his brother over the Governor, with Andrea still stupidly falling for what the Governor is selling, and with the Governor poised to take the prison for himself, the slack has been pulled tight, ready to explode next week. The ending, as the various players moved into position with the score pounding relentlessly, was one of the show's most ominous moments yet.

Other Thoughts
Even though this was, relative to this season, a slowdown episode, things still moved really fast: the decision to trust Michonne and mount a rescue operation could have, in previous seasons, required at least an episode or two of debate, whereas here it was handled in a matter of minutes.

Similarly, the whole confrontation between that hermit and the rescue party sped past with no real time to contemplate it, which is probably for the best (because seriously, what the hell was his deal?). On the hand, it can be viewed as a snapshot of this new world: everyone has a story, and here the story we've been following intersects with that hermit's (why he's living on his own, somehow ignorant of what's happened to the world), but ours takes precedence, so we never find out his deal, and the he gets killed (and eaten). On the other hand, it can be viewed as some pretty sloppy plotting ("Zombies! Run away! In here! There's someone there! He doesn't seem to get the state of the world! He's dead! Toss him out! And...resume") in the middle of an otherwise tight episode.

I'm also torn on the subject of Milton's test failing. It would have been nice if he'd been at least partially right, simply because that would suggest there could be more to the zombies then we've been led to believe, which would open the door to a possible change in the status quo of the zombiepoc. On the other hand, I really wanted to see him realize how wrong he was, and was glad when Andrea turned out to be right. In the end, the whole endeavor served to fully illustrate how, despite what they've achieved in Woodbury in terms of relative safety, the Governor and his peers still haven't quite grasped exactly what this new world is like.

Rick taking away Michonne's sword and locking her up (briefly) seemed like a reasonable response to the sudden appearance of an unknown person, even one carrying baby formula. Squeezing her wound to get answers faster was far more troubling.

Glen is awesome. That is all.

On a show that's struggled in the past with its portrayal of women, I really wanted Maggie to not be the one to break. That said, words can't express how grateful I am that the Governor only threatened her with rape, and didn't actually take it that far. As presented, the scene was intense and terribly difficult to watch (in a "can't turn away" kind of way); had the Governor actually followed through on his threat, the whole thing would crossed into the realm of the exploitative and pointlessy-crass.

It's a little more understandable given the small amount of time that's passed and the fact that Michonne is naturally laconic, but I kinda want to call shenanigans on the fact that she never mentioned Merle or Andrea to Rick and company. "They were captured by this psychopath named Merle" seems like a pretty natural thing to say at some point.

The scene in which everyone reunited with Carol was excellent. Another rare moment of "win" for the characters, one I suspect everyone (the characters and the audience) needed heading into the finale.

The scene between Rick and Carl was also quite good, and we finally got a real name for Asskicker. Judith is, perhaps, a bit random (unless we find out Carl had some deep connection with his third grade teacher), but I can understand his desire to not want his sister to share her name with someone he's lost, and is a nice way to connect her with the world of the past, a world she'll never know.

I also like how both Michonne and the Governor are so impressed by what Rick and the group has accomplished in clearing out the prison, something Merle, even with all the Governor's resources, believed impossible. It helps underline just how effective they've become as a group, and makes it more believable that they could take on the Governor and survive (even though I don't expect much in the way of victory in that regard).

Words can't express how much I want to see Merle and the Governor get their comeuppance, especially after the Glen and Maggie scenes in this episode, but I have the sinking sensation it won't be for awhile yet, it ever. I'm not predicting good things for Rick and company in the fall finale (I could see them maybe successfully rescue Glen and Maggie, but only because the Governor leads a chunk of his people to the prison and ends up taking it over and capturing everyone Rick left behind).
Newer Post Older Post Home
Posted by Austin Gorton at 12:00 PM