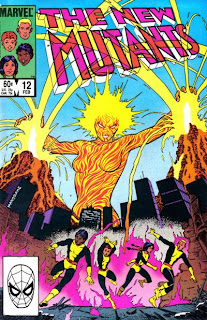 In a Nutshell
Amara loses control in Rio De Janeiro, convincing her she needs to join the New Mutants.

Plot
In Rio De Janiero, Emmanuel DaCosta arrives to his office to find Roberto waiting for him. Roberto tells his father to forget about the Maderia, that Nova Roma is off limits, or else he and the other New Mutants will do everything in their power to stop him. His father tells him that if he leaves, it will be as though he has no son, to which Roberto replies that he's now half an orphan. Enraged, Emmanuel calls Sebastian Shaw and tells him he accepts his invitation to join the Inner Circle of the Hellfire Club. Meanwhile, Dani and Amara are enjoying the beach at Ipanema, with Amara reflecting on her father's decision to send her to Xavier's school to gain control of her power, when the girls are accosted by a group of men. When one of them kisses Amara, she triggers a volcano on the beach. 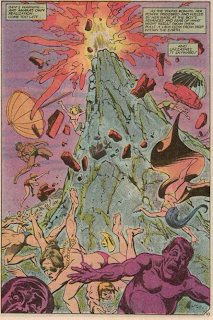 Nearby, Rahne enters a church to pray when Sam rushes in, telling her they need her help tracking down Amara, who's gone missing. Elsewhere, Amara is wandering the streets, suffering from heat stroke. When a police officer tries to take her to his station, she breaks free, triggering more volcanoes. The New Mutants follow her path of destruction as Amara hallucinates, eventually collapsing and being found by a group of children. They take her to their home in a shanty town. The New Mutants arrive, Rahne having tracked her scent, and Dani sends Sam and Roberto to find some ice to cool down Amara. They find an ice truck, and on their way back realize that Amara is creating a large volcano in Rio harbor. Fortunately, the ice is enough to break Amara's heat stroke, leaving the volcano in the harbor as a new island. Realizing her father was right, Amara resolves to join her new friends at Xavier's school.

Firsts and Other Notables
Amara joins the team as of this issue, agreeing to go to America to learn how to better control her power.

In the wake of his confrontation with Roberto, Emmanuel Da Costa joins the Inner Circle of the Hellfire Club in this issue as well. 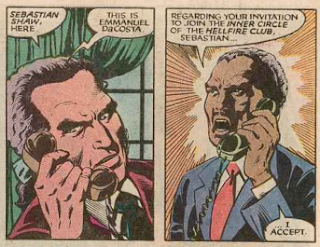 A Work in Progress
Roberto confronts his father over the fact that he was willing to kill Roberto and his mother in order to access the resources of Nova Roma and the Maderia, leading to a rift between the two that will never quite heal. 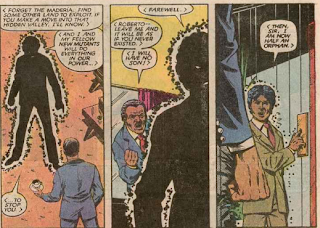 The denomination of Rahne's Christianity is established as being Scots Presbyterian, specifically not Catholic, as has been mistakenly reported on occasion. 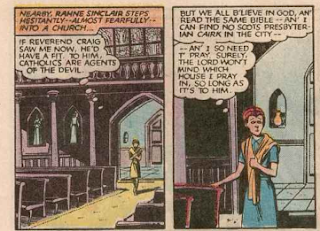 Amara mentions that Selene killed her mother; I can't remember if that was revealed previously, but it becomes a significant element of Amara's hatred towards Selene when the two meet again.

Dani notes that when she created the image of a snowfall to cool down Rahne in issue #8, the illusion was entirely in Rahne's head, and that she didn't create actual snow.

I Love the 80s
Dani is once again wearing the skimpiest bathing suit.

Apparently you could just kiss whomever you wanted on the beaches of Rio in the 80s. 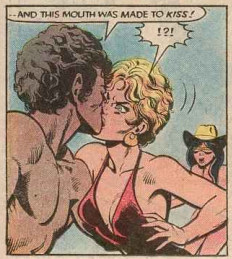 A disoriented Amara is helped by a cop, until she speaks English. At which point the cop decides she must be a foreigner, and thus on drugs.


Sam and Roberto combine their powers to get an ice truck to Amara, via, as pictured/described, some dubious physics. 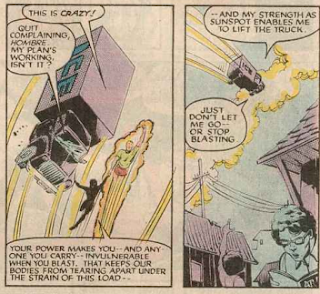 Young Love
Rahne admits (to herself) to being in love with Sam. 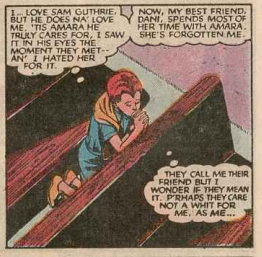 Teebore's Take
Though ostensibly the last chapter of the "Nova Roma" story, this issue benefit greatly from the New Mutants having finally been removed from the titular city. The end result shares the series' general blandness in both art and story, but succeeds once again on the strength of characterization. It also serves as a nice vehicle for integrating Amara onto the team, making it clear why she needs to study at Xavier's school, both to gain control of her power and to familiarize herself with the modern world. In that sense, this issue is as much about looking forward as it is serving as an epilogue, which is a good thing: moving past "Nova Roma" is exactly what this book needs.

Next Issue
The X-Men's battle with the Brotherhood heats up in Uncanny X-Men #178, followed by the New Mutants (finally) returning to the mansion in New Mutants #13.
Newer Post Older Post Home
Posted by Austin Gorton at 8:00 AM