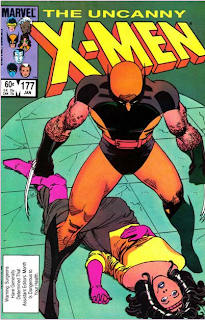 In a Nutshell
Mystique attacks the X-Men to retrieve Rogue.

Plot
In an abandoned circus, Mystique is attacked by Wolverine, but she manages to evade his attack and slit his throat, killing him. Posing as him when Kitty investigates, Mystique kills her as well, then leads Cyclops and Colossus into a fun house where a series of pre-placed amplifiers increases the power of Cyclops' optic blast, killing Colossus. Mystique then sneaks up behind Cyclops and strangles him. Donning a special suit, Mystique exits the fun house and is attacked by Storm. She absorbs the energy of Storm's lightening attack via the suit, and explodes a nearby fuel tanker, killing Storm. Inside the big top, Mystique is attacked by Rogue, but manages to blast her into oblivion. Mystique is then grabbed by Nightcrawler, who teleports her throughout the tent. Mystique is unfazed by the teleportation, but hesitates when she's about to stab Nightcrawler, who uses the opening to knock her out. Later, Mystique awakens to Destiny tending to her wounds as Arcade enters, congratulating Mystique on her performance against his robot X-Men. Mystique arranges to have Arcade run her Brotherhood through the same program.

Meanwhile, at dance class, Kitty discusses Storm's recent changes with Stevie Hunter while the Starjammers bid farewell to Professor X, Cyclops and Havok before leaving Earth to help Lilandra reclaim her throne. That evening, Colossus, Nightcrawler, Kitty and Amanda Sefton arrive at Lincoln Center for the ballet. As Colossus and Kitty park the car, a nearby building explodes. Kitty goes to call the fire department while Colossus runs inside to rescue any survivors. Instead, he finds Blob waiting, the explosion a holographic illusion. Blob punches Colossus out of the building, where he's grasped in mid air by an enormous fire bird created by Pyro. He struggles with the creature, growing ever hotter, until he's dropped in the middle of a construction site. As Kitty arrives on the scene, Avalanche triggers a small earthquake, sending five nearby tanker trucks filled with liquid nitrogen crashing onto Colossus' superheated form, leaving him little more than a statute of twisted metal.

Firsts and Other Notables
Mystique and her Brotherhood of Evil Mutants return, making only their second appearance in the title since their debut in "Days of Future Past" (though they have of course appeared elsewhere, prior to this issue most recently in Rom #31). The opening pages of the issue are written with first person captions from Mystique's perspective, the first time we've ever had a look inside her head.

Claremont once again hints at the connection between Nightcrawler and Mystique, having the later unable to kill the robot replica of the former, despite having been able to take out the Rogue robot without hesitation. It's also revealed that Mystique isn't fazed by teleporting along with Nightcrawler. Unfortunately, Claremont will never come back to the Nightcrawler/Mystique subplot, leaving it to later writers to resolve (a resolution which, surprisingly, hews pretty close to Claremont's planned idea). 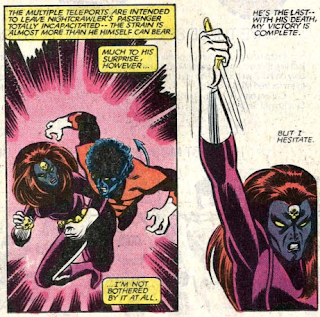 Doug Ramsey is mentioned within an issue (not just the letters page) for the first time, and Kitty's discussion of the project they're working on together sparks jealousy in Colossus. 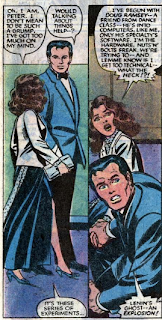 Arcade reappears, functioning as a trainer-for-hire for Mystique and her team, which is a rather ingenious use of the villain which allows him to keep his schtick without devaluing it by constantly having heroes escape from Murderworld. 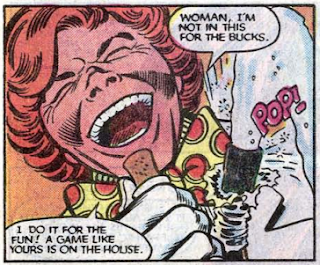 John Romita Jr. is inked by his dad, John Romita Sr., which gives the issue something of a throwback, Silver Age look.

This issue was part of "Assistant Editors' Month", and features a one page strip of Eliot Brown measuring the Blackbird for its feature in the Official Handbook of the Marvel Universe (Brown was responsible for most of the schematic/architectural drawings in the series). Otherwise, it's business as usual on the title. 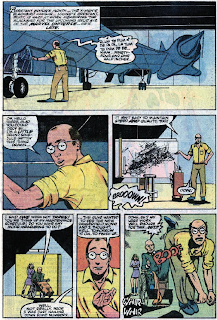 A Work in Progress
While morphing back to Mystique from Wolverine, Mystique is depicted as removing Wolverine's gloves. It's unclear if that's supposed to represent a limitation of her power or something else.

After months of talking about it, the Starjammers depart Earth in this issue, with Corsair pleased that both his sons declined a life of revolution and space piracy. 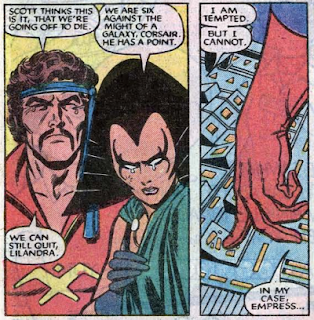 Kitty is still dealing with Storm's transformation, worried that her outward changes indicate the person she knows and love has become some kind of monster. Storm, meanwhile, worries that Kitty may be right. 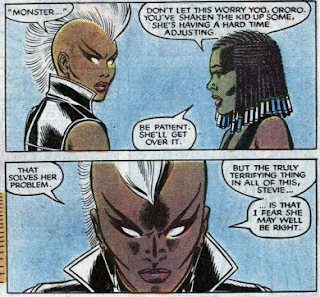 Colossus once again wonders if he could melt, and comes the closest yet to finding out. 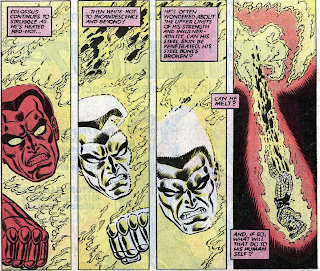 I Love the 80s
Not surprisingly, Kitty's dance attire wouldn't be out of place in the "Physical" music video.

How odd that Nightcrawler would suddenly question his past at the same time Mystique grappled with some kind of secret connection to him. 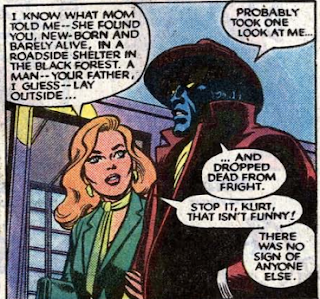 Kitty mentions how difficult it's becoming to park in New York City. 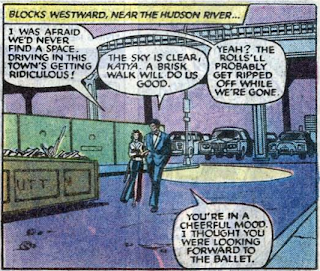 Claremontisms
Arcade declares "my game, my rules", one of Claremont's favorite tautologies. 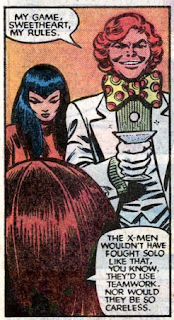 Artistic Achievements
I have long wondered who the woman on this cover is supposed to be; I'm guessing Kitty, but her look is so generic, and the clothing so awful, it's hard to know for sure. Not one of Romita's better X-Men covers.

Later, Nightcrawler teases Colossus and Kitty about making out in the car. 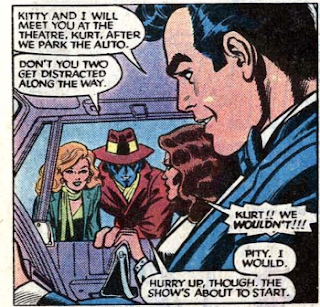 The Best There is at What He Does
Mystique is able to kill Robot Wolverine by slitting his throat. Assuming Arcade's robots are fairly accurate, this provides a nifty benchmark for Wolverine's power level at this point, and provides the character with a physical vulnerability despite his power. 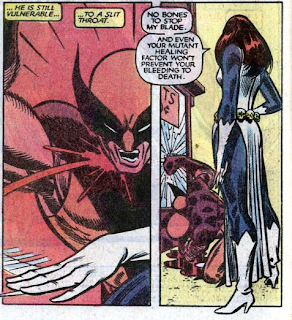 Teebore's Take
With the Madelyne/Mastermind story that served as a sequel to "Dark Phoenix Saga" resolved and in the rear view mirror, Claremont picks up a dangling thread from that story to drive the next one: Rogue's defection to the X-Men. This leads to a confrontation with Mystique's Brotherhood of Evil Mutants, surprisingly only the second such encounter between the two teams. Unfortunately, that confrontation is mostly saved for next issue, with the Brotherhood appearing only in part during closing pages of the story. Instead, the bulk of the issue is handed over to Mystique seemingly taking on the X-Men one by one. It features some imaginative takedowns of the X-Men (such as Wolverine getting his throat slit), and gives Claremont an opportunity to develop a first person voice for Mystique, but as soon as X-Men start dying, it becomes clear something fishy is going on even before Arcade pops up (there are other hints to the truth as well, such as Cyclops' presence and Storm's old look), and the resultant voice for Mystique fails to rise above the level of generic villainy. As a result, the sequence feels like padding, and one can't help but wonder if some of the pages devoted to her wouldn't have been better served on the eventual X-Men/Brotherhood confrontation instead.

Next Issue
Tomorrow, the New Mutants (and the readers) enjoy the fact that Rio is not Nova Roma in New Mutants #12, and next week, the Brotherhood steps up their attack on the X-Men in Uncanny X-Men #178.
Newer Post Older Post Home
Posted by Austin Gorton at 8:00 AM