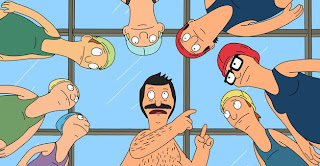 Bob's Burgers leaves behind the film parodies for what might possible be called the show's first Linda-centric episode, though a lot of the laughs still came from the kids themselves (so far this season, the kids have pretty much always been on screen together, and while I don't think that would work forever, their interactions have yielded some pretty good gags). This was pretty much just the show being its weird self, with no homage or parody to anchor it, and it worked pretty well, with Louise elegantly but shortsightedly working the system before the entire family is nearly brought down by authoritative bureaucracy (represented in this episode by the kids' guidance counselor ). The pregnant yoga gag from the beginning even paid off at the end, and Louise's various schemes to shut down the pool were great.

Louise: I could read it, but I retain it better when Mom tells it to me.

Gene: Next time we do this, I'm getting an epidural. 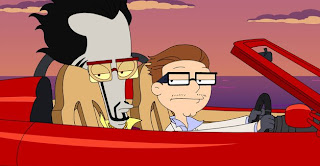 As the episode began, I figured we were in for another rare Haley/Jeff storyline, and got excited by the idea. Then, it looked like instead it was going to be another "Stan/Francine do something extreme" story, which is always fun (the Parkour episode remains one of my all time favorites). Then, Francine quickly said "nuts to this" and it became clear this was going to be a "Stan does something extreme" story, but that was okay, because those are usually pretty good too (this show thrives on farce). And so despite all those revised expectations, this was still a funny episode. The Steve/Roger plot was fairly slight, but that was probably for the best, as I don't think they could have gotten much more story out of that idea, and it intersected with Stan's story nicely (and yes, there's a political element to this episode, with the whole idea that minimum wage isn't enough to live on, but the episode always seemed to downplay any commentary for laughs, and I didn't really catch the political angle until thinking about it after the fact; during the episode, I was just laughing at stuff).


Once Upon a Time: Hat Trick
When I heard "Mad Hatter" episode, and then saw the preview for it, complete with both Emma and Mary Margaret tied up and threatened like they were in a horror film, I wasn't expecting much, and I certainly wasn't expecting one of the most mythology-heavy episodes of the series yet. But this episode turned out to be a pleasant surprise. In FTL, we got perhaps one of the most radical re-imaginings of a fairy tale character (or, in this case, a Disney character, as Alice isn't exactly a fairy tale) yet, and while the story itself was predictable, there were some fun surprises in the re-imagining (like the idea of the various fairy tale worlds being different realities, an idea also fronted by the Hatter in Storybrooke).

Back in Storybrooke, what looked like the start of a really bad horror movie, turned instead into a discussion of the relationship between Storybrooke and Fairy Tale Land, as we learn the Hatter of Storybrooke, like Regina and Gold, remembers FTL. Frustratingly, he pretty much lays it all out for Emma, including the idea that Storybrooke and FTL are simply two different alternate realities and the knowledge that things started to change once Emma arrived, and yet Emma obstinately insists on disbelieving all the fairy tale stuff. Because she's apparently one of the dumbest characters on TV, the fact that multiple people have now expressed the same "delusion" seems lost on her, and she continues to insist there is no truth to Henry's beliefs despite other people who have never met Henry expressing them as well.

As the show's first season nears its end (there can only be a few episodes left, right?) and next week's episode looks to answer the "what did Snow do to Regina?" question that remains the biggest lingering question in the FTL narrative, forward momentum on the show's overarching plot is needed. But the show also needs to stop portraying Emma as an idiot and have her realize that enough weird shit has happened that maybe Henry is right about FTL after all. There is little on TV more frustrating that a main character who remains dumb simply to draw out the plot longer.

Other Thoughts
Regina was referred to as such in FTL, the first time (I think) it was confirmed that she has the same name in both realities.

So Gold is working with Regina to frame Mary Margaret (apparently). In addition to Emma's ongoing stupidity/stubbornness regarding FTL, her complete lack of genuine help is becoming tiresome. Every time it looks like she has an ally against Regina, we get an episode-ending cliffhanger that takes away that ally (Graham was killed, Sydney and Gold turned out to be working with Regina). Maybe that's what the show is positioning Mysterious Sexy Writer to be, Emma's actual ally?

The discussion about history books vs. fiction was also fun, vis-a-vis the alternate reality scenarios.

Regina disguising herself as an old woman was a nice touch, though I didn't really need her to flash her real face to the Mirror for the slow kids.

Mary Margaret showed off some of Snow's fighting abilities, another bleed through between the worlds. 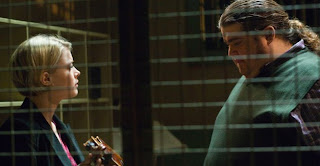 In its pseudo-penultimate episode (I don't know if this week's two hour finale was two episodes or one) the 'Traz thankfully continued the improvement the show has illustrated in the back half of the season, giving us another interesting and creepy 63 (albeit another with childhood issues, though to the show's credit, it's made it pretty clear that is going to be an actual thing and not just a huge coincidence) alongside some snippets of Hauser backstory and greater mythology. The ending takes us into the finale on a strong note, as Madsen and Doc learn the truth about Lucy just before Lucy herself is revived thanks to the con's super healing blood. Bring on the finale, and that's hope it's not the end for the show.

Other Thoughts
Once again, we had a con in the present who seemed much more vicious and casual about killing than he ever did in the past. This has to be a thing, doesn't it?

The bit with Beauregard struggling with how the web cam works is another instance of the show needing to decide how the 63s regard modern technology, though perhaps Beauregard, not being a convict, is a special case. 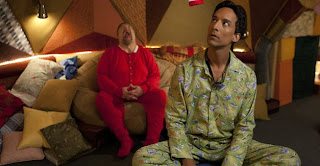 Last week I mentioned my anxiety over the apparent rift in the Troy/Abed friendship, but I didn't expect the show to follow up on it so quickly (of course, had the hiatus not occurred, we would have had at least one, if not more, episode between the last and this one). Thankfully, the show represented their rift in a way only it could: via an escalating blanket fort vs. pillow fort war that threatens to consume the school, all stirred up by a suddenly-bearded-and-pony-tailed Vice Dean Laybourne (he's going through some stuff). I genuinely hope Troy and Abed emerge from this with their friendship intact, as unrealistic as it might be, as their relationship is one of my favorites on the show. But in the meantime, I'm happy to watch the ensuring carnage that represents their conflict, and appreciate the way it ties into Laybourne's season-long efforts to coerce Troy into joining the air conditioning school.

Other Thoughts
We got THREE plots in this episode, and the Britta plot was easily the funniest of them all (the Troy/Abed stuff was more setup for next week), both for Britta's obliviousness (I love that she got neither the pun in the name of her "Britta Unfiltered" column, nor the completely irony in wanting to force someone to read 1984) and for the whole idea of corpo-humanization. It was also nice to see the Shirley/Pierce sandwich shop plot continue (it's always nice when Pierce is given an opportunity to do something other than be a complete boob).

The Jeff/Annie plot was okay but nothing exciting (despite me being an embarrassed Jeff/Annie shipper and thus appreciating Annie's little dig about making out with someone than ignoring them). I did enjoy the running "we saved Garrett/did we?" gag though.

John Goodman is always welcome, and the sight of him in red footie pajamas just about made me lose it.

Absolutely loved the epic score at the end as the blanket/pillow fort war kicked into gear.

Annie: Put it in a letter, Jane Austen!
Newer Post Older Post Home
Posted by Austin Gorton at 10:00 AM