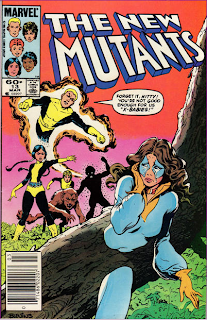 In a Nutshell
Magma settles in at Xavier's school as Doug Ramsey makes his first appearance.

Plot
The New Mutants introduce Amara to Professor X, who welcomes her to the school and shows her to her room, which has been designed to resemble her room back in Nova Roma. That evening, the New Mutants hold a welcome barbeque for Amara, but when Sam, trying to show off, accidentally spills soda on Amara's dress she runs off, triggering an earthquake as she goes. Roberto prevents a fire from breaking out and Rahne and Dani follow Amara into the woods, but decide to respect her privacy. Meanwhile, at Project: Wideawake headquarters, Sebastian Shaw and Henry Gyrich are showing Val Cooper a Sentinel test when the machine goes wild, a victim of someone taking control of the computer system, forcing Gyrich to destroy the Sentinel. Back in New York, Kitty and her friend Doug Ramsey realize their connection to the government system they hacked has been severed, but Doug doesn't think they'll be discovered. 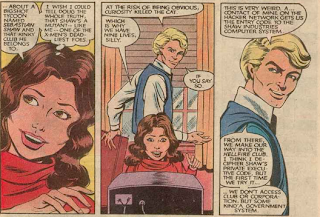 They're discussing Shaw's odd connection to the government when Kitty is called back to the mansion by Professor X. Cutting through the woods, she encounters Amara, who rebuffs her help, and the rest of the New Mutants, who are cold to Kitty due to her open disdain for being part of their team. Meeting with Xavier, he tells her she needs to settle her feud with the New Mutants and stop neglecting her own training. The next day, when Rahne is admonished for using her power during dance class, Kitty takes her side, saying she once did the same thing. Later, Amara has her first session in the Danger Room. But when she learns Xavier will be monitoring her telepathically, she runs out, upset that he would come into her mind. That night, a distraught Amara wanders the halls of the school, contemplating returning home. She inadvertently overhears a conversation between Professor X and Lilandra, and when Professor X tells Amara about how he and Lilandra are separated due to their commitment to their respective duties, she realizes she has a duty to learn to control her powers, and decides to stay at the school.

Firsts and Other Notables
Doug Ramsey, who eventually join the New Mutants as Cypher, appears for the first time, after being mentioned in previous issues of X-Men. For now, he is simply a normal friend of Kitty's from dance class who shares her interests in computers (he knows software and programming languages, she does hardware). It's specifically noted that he doesn't know anything about the X-Men or the New Mutants at this point, and isn't even aware that Kitty and her classmates are mutants.

Amara receives her Magma codename from Professor X in this issue.

Though on sale the same month as Uncanny X-Men #178, the events of this issue occur chronologically after X-Men #179.

Amara's head has been added to the corner box.

The cover of this issue is drawn by future New Mutants penciller Brett Blevins.

A Work in Progress
Kitty appears on the cover wearing what appears to be a blue version of her Ariel costume, though she does not appear in costume in the issue itself.

No mention is made of either Karma's absence or the search for her, aborted or otherwise, suggesting the trip to Nova Roma has made everyone forget about her.

Stevie Hunter introduces herself to Amara as someone who teaches dance and helps Xaviers with the kids, which, while technically true, is bit more than her original edict of "gym teacher". 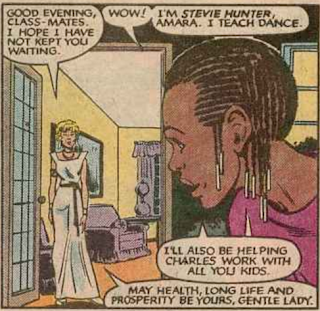 Both Val Cooper, making her second appearance following X-Men #176, and Sebastian Shaw are seen alongside Henry Peter Gyrich at the Project: Wideawake headquarters.

Kitty, having received Doug's help to hack into Shaw Industries, begins to suspect Shaw's involvement with the government after their hack leads them from Shaw Industries to the Hellfire Club to a government system (Project: Wideawake, though that's unknown to them).

In the course of her conversation with Doug, Kitty brings up her parents' divorce.

Professor X reminds Kitty that for all her talk of the New Mutants being "X-Babies", two of them are older than her (Dani and Sam).

Professor Xavier mentions the events of Marvel Team-Up Annual #6; this is arguably the first time since that issue was published that a natural reference point could be worked into the story. 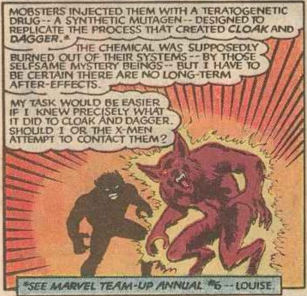 Professor X is once more hit by the psionic scanning wave he first encountered in Uncanny X-Men #178. 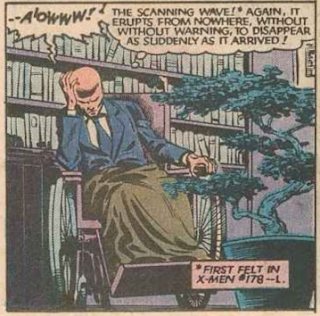 Frustrated in computer class, Rahne thinks that she's as stupid as she is ugly, a sentiment Xavier overhears and dislikes.

Rahne mentions that Moira is her godmother; I believe this is the first time that relationship is revealed (in Marvel Graphic Novel #4, Moira merely rescues Rahne from a mob and sends her to Xavier).

I Love the 80s
It's not entirely outdated yet, but even on a cover from 1983, the presence of a speech balloon is starting to feel quaint.

Kitty and Dough hack into Project: Wideawake and inadvertently take control of a Sentinel. 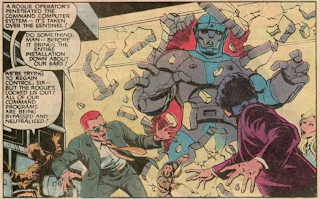 "Professor Xavier is NOT a Jerk!"
Professor X assures Amara he would never use his power to pry into her mind, and only maintains a constant rapport with her throughout the issue to help her control her power and ensure she doesn't, you know, accidentally volcano New York to death. 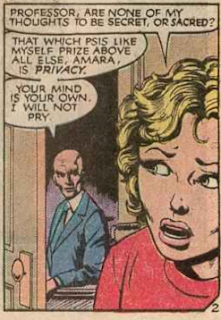 Young Love
Dani wishes Roberto would turn some of his charm towards her. 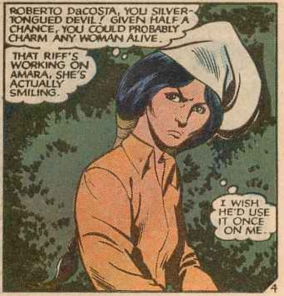 Kitty worries about how her friendship with Doug might affect her relationship with Colossus, and whether she'll ever find herself in love with Doug.

En route to Shi'ar space, Lilandra has one final conversation with Xavier before going out of range. 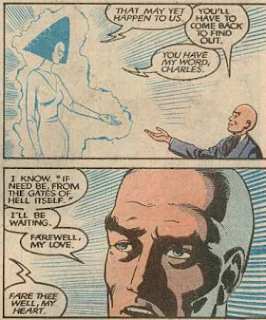 The Awesome and Terrible Power of CyclopsMagma
Like Cyclops before her, Magma is so overcome with angst over her power she must drape herself across a rock. 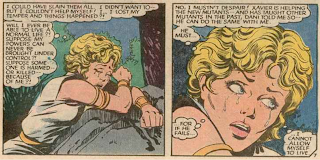 Human/Mutant Relations
Amara asked whether being a mutant is something to be ashamed of, which Rahne sadly says is true. 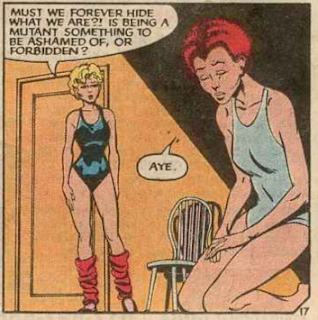 We learn each of the Sentinels Shaw Industries is creating for the government costs $5 million.

Teebore's Take
Like last issue, this is another character-focused issue, though it gains a lot from finally getting the New Mutants back in New York and interacting with the book's supporting cast (and Kitty). It also has a lot in common with the "quiet" issues Claremont did with Paul Smith, in which the issue is entirely devoted to moments of characterization and development of subplots. Even the relatively-minor Magma rampage and ice truck retrieval action scenes of last issue are gone (the closest we get is Roberto tossing a burning tree and the rampage of a hacked Sentinel). Instead, Claremont focuses on Magma's discomfort with her new home, the relationship between the New Mutants and Kitty (thus addressing another leftover "From the Ashes" bit - Kitty's vocal disdain of the New Mutants from X-Men #168), and the introduction of Kitty's "normal" friend, Doug Ramsey. In that regard, this issue is the first one of the series in a long time that reads similarly to what Claremont has been doing in the main title.

Next Issue
We find out what happened to Kitty in Uncanny X-Men #179, and explore Illyana's time in Limbo in the Magik limited series.
Newer Post Older Post Home
Posted by Austin Gorton at 11:00 AM