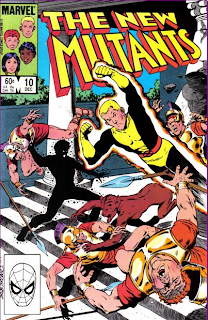 In a Nutshell
The New Mutants are drawn deeper into the machinations of Nova Roma.

Plot
The New Mutants, heralded as gods, are paraded through the streets of Nova Roma. Arriving at Senator Gallio's palace, he tells them of how Senator Aquilla, Amara's father, wishes to declare himself emperor of Nova Roma. Though both Sam and Dani sense that Gallio is lying, they play dumb. That night, Roberto goes for a walk, and sees a woman he believes to be his missing mother in the street, but Gallio's guards detain him, and following Xavier's teachings, he refuses to use his power on them, so he loses his mother in the crowd. Later, Dani sneaks out of the palace, hoping to get a sense of what Nova Roma is really like, when she's grabbed from behind. Back inside, Roberto is suddenly shot in the arm, and the New Mutants discover the gunman is Castro, who claims Senator Aquilla hired him to kill the mutants. Gallio orders the immediate arrest of Aquilla. 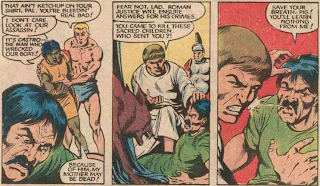 Elsewhere, Dani awakens in a cavern alongside two other girls, one of whom is Amara. They are led to a pit of lava, where Senator Gallio's wife, Selene, entrances one of the girls. She throws herself into the lava, allowing Selene to absorb her life force. Back in the city, Sam and Roberto help Gallio's guards arrest Aquilla, but when they observe the guards trying to kill Aquilla, they save him, and when he's handed over to Gallio, Roberto overhears their conversation in Latin, making it clear that Gallio is actually the one trying to seize power. Back in the cavern, Selene prepares to sacrifice Amara. Dani uses her power to break free and rush Selene, but is easily overpowered. The confrontation allows Amara to snap out of her trance, but she is still knocked into the pit by Selene, which triggers an earthquake throughout the city. Suddenly, a column of fire spews forth from the pit, with Amara, enveloped in flames, riding atop it, declaring vengeance on Selene.

Firsts and Other Notables
Amara manifests her mutant power for the first time, emerging from Selene's firepit seemingly comprised of lava. 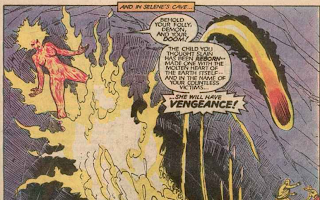 We also learn more about Selene, specifically that she is a mutant with some kind of psychic powers, and that she is several centuries old, using the energy of young woman to remain young. 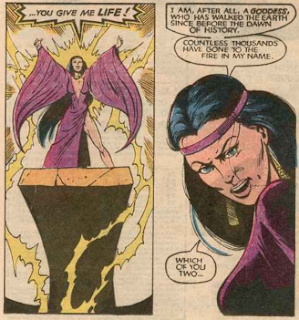 Karma's head has been removed from the corner box.

A Work in Progress
Not surprisingly, Rahne thinks it's "na' proper" (which is darn near a Claremontism at this point...) for the Nova Romans to worship her as a god.

Both Dani and Sam display leadership ability, with both taking charge at one point or another.

Rahne admits to Roberto that she wishes she could stay a wolf.

Dani believes her mutant metabolism prevents her from being as affected by a drug as two other girls, another example of the occasionally-mentioned idea that mutants heal faster than regular humans (though it's worth noting that Amara is one of the still-drugged girls, and though Dani doesn't know it at the time, she's a mutant as well).

Roberto speaks Latin, something he's been keeping in his back pocket throughout the New Mutants time in Nova Roma. 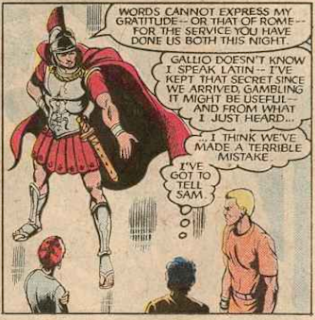 I Love the 80s
Another issue, another excuse to get Dani in skimpy clothes. 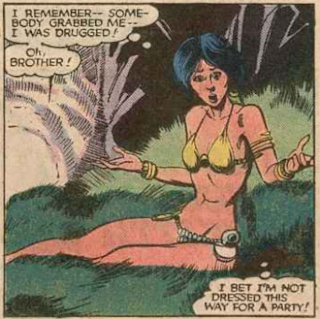 Young Love
Dani wishes Roberto would open up and let her in, another hint at a romantic subplot that I don't recall ever coming to fruition. 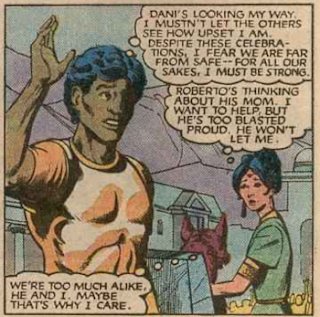 Rahne flies off the handle when someone threatens Sam, and is clearly jealous of his attraction to Amara.

Human/Mutant Relations
After seeing Selene in action, Dani can see why some humans may fear mutants. 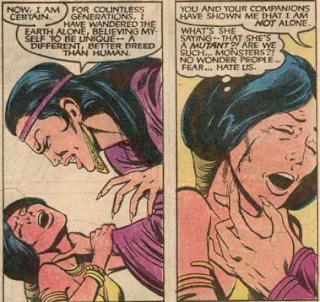 Teebore's Take
The New Mutants' Nova Roma adventure continues, with more of the same: competent but unexciting writing and art. Thankfully, with much of the setup work done last issue, Claremont is able to work some characterization into this one, which, as with past issues, at least helps connect this story to the larger narrative. There's hints of possible romances, with Rahne filled with jealously over Sam's affection for Amara and Dani wishing Roberto would open up to her, Rahne's continued struggle with the wolf side of herself, as well as suggestions of Sam and Dani's burgeoning leadership abilities in the wake of Karma's departure. We also learn more about Selene and experience the first manifestation of Amara's powers, which creates the impression that the story is moving along even while it also already feels like we've been in Nova Roma (and away from the mansion) forever.

Next Issue
Things get whacky in X-Men Annual #7.
Newer Post Older Post Home
Posted by Austin Gorton at 11:00 AM