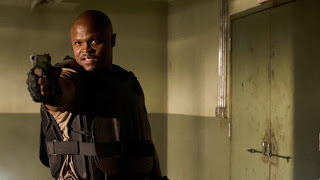 Slightly less intense than the premiere, this episode still did a good job of keeping the tension high and providing plenty of zombie-killing action. Even better, it seemed to nip the potential prisoners storyline in the bud. It wouldn't be at all surprising to see the remaining living prisoners pop up again, either as allies or antagonists, but for now, any fears of a protracted, half-season or more struggle between Rick and the prisoners for control of the prison seems to have ended with a well placed machete to the head. Compare this to last season, when a threat to the safety of the group was debated and argued and even after a decision was made, Rick still couldn't follow through, leading ultimately to his showdown with Shane (and several episodes of simmering wheel-spinning). Rick's actions in this episode are a strong sign both of how he has changed and how the show has changed as a result. Rick has become harsher, colder, more inhumane (he can't even be bothered to placate Lori), more Shane-like than ever (though still less selfish and dickish). It's a troubling turn for the character, but chronicling the transformation (along with the narrative expediency it allows) is making the show stronger.

Meanwhile, Hershel struggles for his life, and because we actually care about him (and Maggie), those scenes aren't a total letdown from the action. It also made it clear that the entire group, not just the zombie killing squad, has become more efficient when it comes to living in this world, as Carl manages to retrieve some medical supplies and Carol puts some Hershel-taught medical expertise to work. And by letting Hershel live, at least for awhile, the show does something important: it gives the characters a win, helping make things, however small, however fleetingly, seem a little less bleak and hopeless. That's as important to the show's success as preventing the narrative from stagnanting.

Other Thoughts
Dish and AMC finally reached a multi-year agreement (around 8:46 PM Sunday night, judging by my email), likely motivated by the huge ratings for Walking Dead's season premiere, so I once again have regular access to the show (and I'm very glad I held off on that iTunes season pass). So expect Walking Dead posts every Tuesday, except for the odd week when I can't catch the show right away for whatever reason.

Rick leaving the one prisoner locked in the yard with some zombies was pretty harsh, especially considering the prisoner was more scared than anything, and hadn't just tried to kill him. Yet another morally-compromising decision on his part.

Whacking that guy in the head with a machete, though? Like the guys in the bar last season, justifiable, and pure badass.

I appreciate that the show left unstated the possible bias Rick, as a former sheriff, may have against a group of convicts. Even moreso than everyone else, he might be inclined to be less trusting of them, yet the show wisely let us come to that conclusion ourselves.

Laurie admitting she hasn't been a good wife or mother: understatement of the year. Still, kudos for the self-reflection. And Rick's awkward shoulder squeeze following  little speech at the end was just painful. Things really are bad between them.

Nice to see Carl accomplish something with a minimum of fuss and without needing to get bailed out. Beth telling him not to talkback to his mother was also a nice moment, but let's hope we're not heading into "mom and surly teen snipe at each other constantly" territory.

We all knew Hershel was going to wake up, one way or the other, once Laurie started CPR, but it was still a good "make you jump" moment. Mrs. Teebore was fully braced for it and she still leaped off the couch.

Who do we think was watching Carol from the bushes? Michonne and/or Andrea? One of the Governor's people?

Speaking of which (spoiler if you've legitimately managed to avoid ANY pre-season publicity and casting news), I'm starting to think the only reason the show has kept T-Dog around this long is for the inevitable confrontation between him and Merle when Merle shows up again.

Nitpicks: I'll take Carol at her word that the shock of cauterizing Hershel's stump would kill him (though I'm pretty sure doctors did it in the old days all the time), but I'm also not sure that bandages and time are all that's need to stop the bleeding from a wound like that, especially with arteries involved.

Also, once again, why aren't these people killing more zombies? When Carol went out to acquire her "cadaver", why did Glen lure the other four zombies away instead of just stabbing them through the fence?
Newer Post Older Post Home
Posted by Austin Gorton at 10:00 AM