The Walking Dead 3x03: Walk With Me 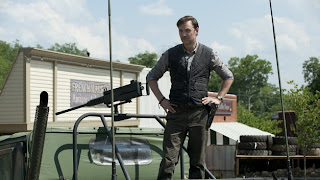 As I've said before, I have yet to read any of the Walking Dead comic series, yet even before the show aired, I was aware of two significant characters from the comics: Michonne, who was some kind of fan favorite badass, and the Governor, who was some kind of post-apocalypse dictator. We've met Michonne (though we still know very little about her), and this episode was handed over more or less to introducing the Governor, and Woodbury, the community he's built. To the show's credit, they don't play coy when it comes to the Governor's true nature. What could have been a drawn out, multi-episode question of whether the Governor was truly a benevolent leader or the pleasant face of something more sinister was put to rest before the end of the episode.

Furthermore, while I have issues with "we have met the enemy, and he is us" stories in post-apocalypse narratives, the Governor and Woodbury give this show something it desperately needs: a place, however small, however tentative, where the zombie threat has been contained and pushed back enough to let some semblance of normal life return. By creating a place where simple survival isn't the entire end goal of daily existence, the show is allowed an opportunity to do some much needed world building and start asking (and answering) questions about how the zombies work and how society can (and could) function in the aftermath of such an apocalypse. The scenes of the Governor and his scientist discussing the nature of zombies, and the episode-ending image of the Governor's room full of Futurama-style zombie heads, were an intriguing glimpse of what a place like Woodbury, and a character like the Governor, can bring to the show.

Other Thoughts
It also helps that, like all good villains, the Governor is charismatic as hell and fun to watch.

I honestly thought it was fantastic that Michonne almost literally spent this entire episode doing nothing but glowering.

Making it clear from the get-go that the Governor isn't as benevolent as he appears has the added effect of making Andrea look like an idiot for buying what he's selling, but we already kinda saw her that way.

Nice touch that while the Governor and his crew have figured out that everyone who dies comes back a zombie, Andrea and Michonne still didn't know that.

Whenever a character refuses to give his real name, or a show goes out of its way to keep it a secret, I start thinking the real name will have some greater meaning. However, I have a feeling that the Governor's name will either go the way of the Man in Black on Lost and never be revealed, or will end up having no significance at all.

Similar to how I'm not a fan of "we have met the enemy..." stories, Merle's return bothers me simply because it will lead to an inevitable reunion with Darryl, at which point the show's most fun-to-watch character will revert to his season one form and likely betray Rick and the others in some capacity, all because of his dumb ass brother.

That said, Merle and Andrea's discussion of what happened since they last saw each other was good. Something else the safety of Woodbury gives the show: a chance to reflect on its history.

So take away a zombie's ability to feed and eventually it'll stop being hungry? Interesting. Also, it seems Michonne was using her chained zombies as camouflage (and pack mules), though her reaction to the Governor's questions about them suggest they were also people she once knew.

Your philosophical question of the day: is it the narrative demands of the genre which require that the vast majority of people who survive an apocalypse be enormous dicks, or is humanity just so messed up that most otherwise-decent people would become dicks in the wake of catastrophe?
Newer Post Older Post Home
Posted by Austin Gorton at 10:00 AM