In a Nutshell
The X-Men search the Texas State Fair for a new mutant before Magneto can recruit him.

Plot
The X-Men are training in the Danger Room when Professor X suddenly announces that Cerebro has detected a new mutant. Determined to find the mutant and persuade him to join the X-Men before Magneto can recruit him into his Brotherhood of Evil Mutants, Professor X sends the X-Men to the mutant's location, in the vicinity of the State Fair in Dallas, Texas. At the horse barns, a mysterious figure approaches a young man named Daniel Wiley. Daniel tells the man about his love of horses and the first time his mutant power to transform into a Centaur manifested. Later, inside a secreted airship, the mysterious figure reveals himself as Magneto, and expresses his determination to recruit Daniel. Shortly thereafter, the X-Men arrive in Dallas and explore the fair, searching for the new mutant. With so much to see, the Professor X resolves that the X-Men will need to continue their search the next day.

The following day, Magneto takes Daniel to the Cotton Bowl, and when they enter, Professor X, also attending the game with Colossus and Kitty, senses the presence of Daniel. Recognizing Xavier, Magneto and the boy flee, but Kitty follows them. In the horse barn, Magneto reveals himself to Daniel, telling him he's come to rescue him from the X-Men. The X-Men arrive and a fight breaks out, with Daniel fighting alongside Magneto. But when the battle threatens the horses in the barn and Magneto expresses disregard for their well being, Daniel turns against him, allowing the X-Men, with a little help from the fair's mascot Big Tex, defeat Magneto. Professor X offers Daniel a place at his school, but he declines, preferring to stay in Dallas with his horses.

Firsts and Other Notables
Given it's nature as a free supplement intended on the one hand to pimp the State Fair of Texas and on the other hand to introduce new readers to the X-Men and Marvel Comics in general, there's not a lot out there about the impetus behind/creation of this comic (in fact, Blam's mention of it in a comment to my post on X-Men #150 appears on the first page of Google results for the issue). Marvel did this kind of corporate synergy thing a lot, but I have no idea how this particular comic came to be, how the X-Men were selected to star in it, etc.

There was a time when this was a particularly difficult issue to find on the back issue market, given it's (presumably) low print run, relative to the main title, and the demand of X-Men completists. I finally found a copy for a couple bucks at a local comic book store a year or two ago, so like many back issues, it seems the demand has dropped more recently.

As far as I know, this issue isn't considered part of the official X-Men canon; the events within are never referenced anywhere else, there are some anachronisms relative to how some of the characters were being depicted in the main book around the time this was published (see below), and neither the official Marvel handbooks or indexes reference the issue.

In terms of the creative team, Jim Salicrup is a long time writer and editor at Marvel, mainly in the Spider-Man office (he's the editor who hired Todd MacFarlane for Amazing Spider-Man), though he did have a brief stint as editor of X-Men during "The Dark Phoenix Saga", while scripter David Kraft is most well known for his work on The Defenders and the original Savage She-Hulk. Art comes from Alan Kupperberg, another long time Marvel staffer who tended to mainly handle fill-ins and one-shots, Kerry Gammil, a journeyman artist whose art we'll see again in the Fallen Angels limited series, and Chic Stone, who inked Jack Kirby on Fantastic Four and X-Men back in the Silver Age.

The cover to this issue is drawn by Marvel legend John Romita.

I guess if we're being technical, this is the first appearance of Eques, a mutant with the power to transform into a centaur that also has wings for some reason, and is saddled with a pretty crappy codename by Magneto. As mentioned above, he's never appeared anywhere else, as far as I know.

A Work in Progress
Storm is depicted in her traditional costume/appearance, not surprising given the recentness of her punk look and this comics' purpose in introducing new readers to the X-Men. 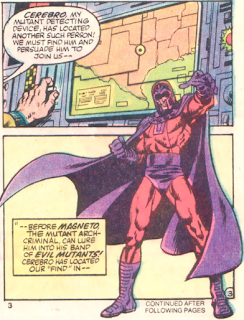 Though in her Ariel costume and using that name, Kitty is depicted more like she was in her earlier appearances, tentative about her place on the team. 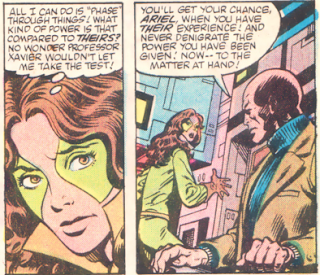 Nightcrawler disguises himself with a hat while at the fair, not via his image inducer, a nice (likely accidental) bit of continuity.

The X-Men are said to be flying their "strato jet" to Texas, not the Blackbird.

Given this comic's dual purpose of shilling the Texas State Fair, there's a handful of hilarious lines about how awesome the fair is. 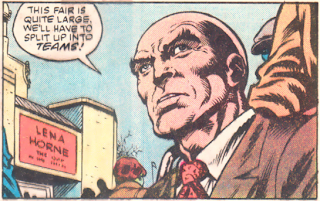 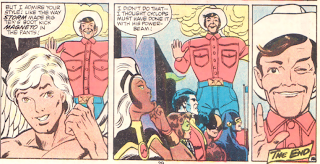 The comic includes several games, like a word find and connect-the-dots. 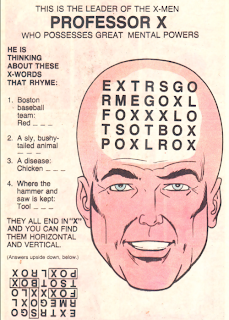 It also includes a one page guide to the X-Men. 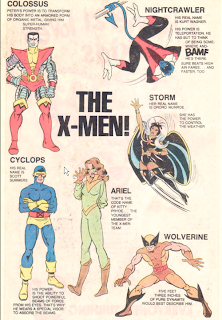 For Sale
There's a lot of ads in this book that feature Spider-Man wedged into what I imagine are more local-to-Texas businesses. 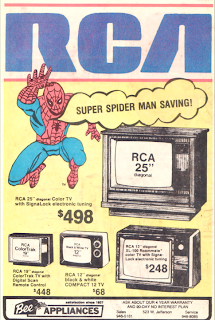 There's also an ad for Chi-Chi's restaurant, which makes me sad. Chi-Chi's was my favorite restaurant as a kid, and the place I went to with my family for every birthday through 2004, after which the last Chi-Chi's in my area went out of business. As I understand it, the entire chain has been shut down, though you can still buy their salsa and seasoning at some grocery stores.


Teebore's Take
This is the kind of story in which Spider-Man would usually star, a team-up between Marvel and some commercial partner that would serve the dual purpose of bringing Marvel comics to new readers and pitching the wares of Marvel's business partner du jour to comic book readers. For years, Spider-Man was Marvel's go-to character for that kind of thing. And while, in 1983, he still was (and remains) so, by 1983 the X-Men had grown in popularity enough that Marvel was apparently comfortable tossing them out in attempt to show potential new readers what Marvel Comics are all about. Unfortunately, the demands of the format (a cross-selling giveaway comic) prevent much of what was making X-Men so popular from shining through.

We can excuse the somewhat dated characterization of Magneto (his reformation was still very much a work in progress even in the regular title), while the plot is a simplistic-but-representative one (it's basically the plot of the first dozen or so issues of the main series). But the story fails to take advantage of the book's strengths: the art is standard house style, lacking any of the dynamism or personality brought to the book by Cockrum, Byrne or Smith (a casualty of the format, which requires broad, agreeable, simple art), the characterization is almost nonexistent (you could sub in any group of six superheroes and the story wouldn't noticeably change) and none of the prevalent themes of X-Men are on display: Daniel is a mutant, and he's fought over by Magneto and the X-Men, but no notion of society fearing and hating mutants, that the X-Men fight to protect humanity despite that prejudice, that mutants can represent marginalized minorities, is suggested. As an introduction to the basics of superhero comic book storytelling, this probably works, especially for a younger audience. But as a primer on the X-Men for new readers it fails, making it little more than a kitschy relic of its time.

Next Issue
Tomorrow, the New Mutants team up with Spider-Man and Cloak and Dagger in Marvel Team-Up Annual #6. Then we return next Wednesday to Uncanny X-Men #174 to deal with the fallout from Wolverine's wedding and the escalating mystery of Madelyne Pryor.
Newer Post Older Post Home
Posted by Austin Gorton at 8:00 AM