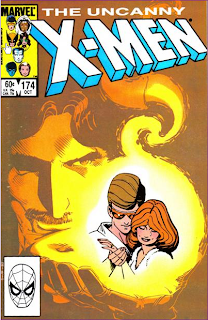 In a Nutshell
Scott proposes to Madelyne.

Plot
Aboard the Starjammer, Scott and Madelyne share their first Earthrise together. As Corsair gives Madelyne a tour of the ship, they learn Carol Danvers is planning to leave Earth and join the Starjammers. Corsair asks Scott if he's still considering joining them, but Scott isn't sure because of Madelyne. Elsewhere, Professor Xavier and Lilandra continue Xavier's physical therapy, and Lilandra once again affirms that she'll need to leave soon to reclaim her throne. In Japan, Wolverine confronts Mariko following their aborted wedding, but she insists she does not love him and orders him to leave her alone. In New York, Kitty pulls Colossus away from a painting and demonstrates her ability to phase someone along with herself by air-walking them into Storm's attic. They kiss, but are interrupted by Storm. 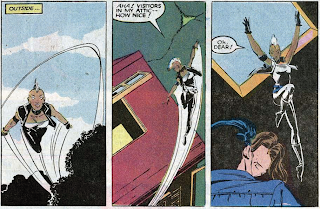 Meanwhile, Nightcrawler tends to Rogue, still recovering from the injuries she suffered in Japan. She asks him about the X-Men's reactions to Madelyne, and he tells her about Jean's rise and fall as Phoenix. Later, Scott and Madelyne are piloting a commercial flight to Anchorage, having gotten engaged. As Scott checks on the passengers, a kindly priest gives him a photo he apparently dropped. It's of Jean, but Scott has no idea how it got on the plane. That night, Madelyne returns home from the grocery store to find a troubled Scott waiting for her. He asks her point blank if she's the reincarnation of Jean Grey. Madelyne punches him, knocking off his glasses. Replacing them, he follows Madelyne into another room, but is suddenly hit with a blast of fire, as Dark Phoenix emerges.

Firsts and Other Notables
Cyclops and Madelyne Pryor's whirlwind romance reaches it's next step, as they get engaged. 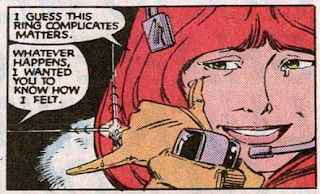 Though he goes unnamed, Mastermind appears in his Jason Wyngarde persona in full, setting the stage for next issue. He also appears on Scott and Maddie's plane in the guise of a kindly, rotund priest, one of the same illusions he used when he was seducing Jean in the run-up to "The Dark Phoenix Saga".

A Work in Progress
After regarding the similarity somewhat dismissively last issue, Xavier is afforded an opportunity to more thoroughly ruminate on Maddy's resemblance to Jean, suggesting it could just be a massive coincidence. 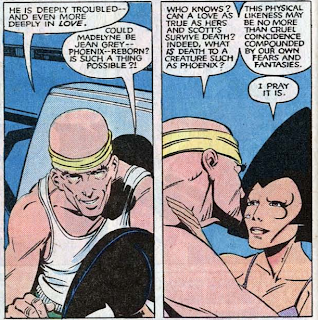 Professor X also says he can't read Madelyne's mind, as she is one of the rare few with a natural resistance to his telepathic powers. 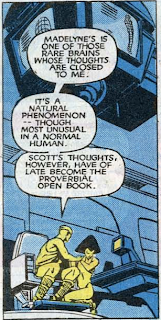 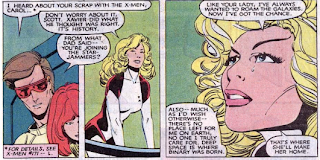 Lilandra declares that whatever is inhibiting Xavier's ability to walk is a physical problem after all.

Cyclops worries because Madelyne won't tell him anything about her life prior to the plane crash. 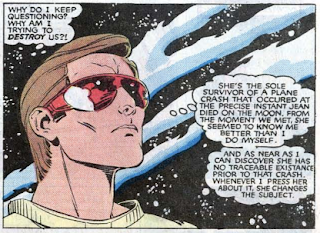 A battered Silver Samurai is named heir to Clan Yashida by Mariko. 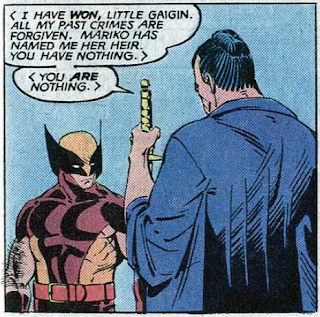 It's revealed that much like objects, Kitty can phase a person along with her.

As part of her recent changes, Storm has removed her plants from the attic. 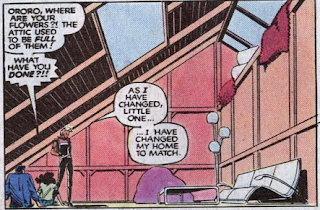 Rogue is still recovering from the injuries she suffered at Viper's hands last issues, despite her invulnerability and having absorbed Wolverine's healing power. Nightcrawler tends to her, furthering his role as the X-Men's medic.

I Love the 80s
Kitty is reading a Star Wars comic book (published by Marvel, natch).

One of the passengers on Scott and Maddy's flight is smoking. 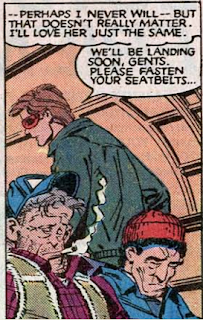 "Professor Xavier Cyclops is a Jerk!"
Scott asks Maddy point blank if she's Jean reincarnated, and she responds with a right cross. 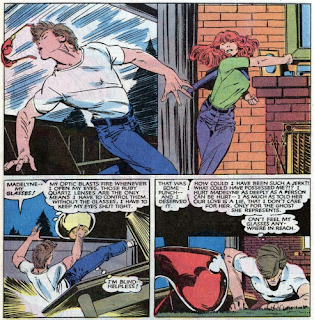 Young Love
Not surprising, given the title of this story, there's lots of lovin' in this issue. Professor X once again discuss Lilandra's departure, with both still unwilling to abandon their respective responsibilities for the other. 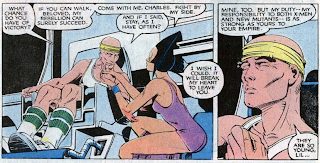 Wolverine confronts Mariko, who insists she does not love him, at which point he returns to her the honor sword of Clan Yashida, which she gave him in Wolverine #4. 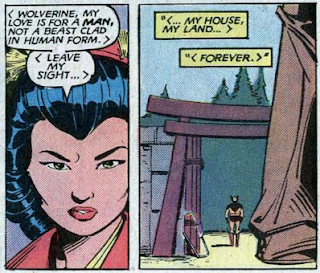 Kitty surprises Colossus with a kiss, and the pair proceed to make out in Storm's attic. 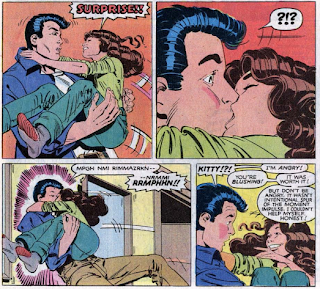 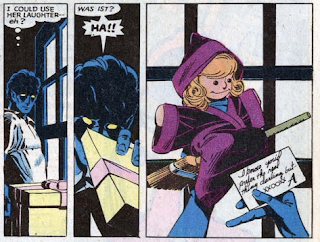 The Awesome and Terrible Power of Cyclops
We learn Cyclops always keeps a spare pair of ruby quartz glasses in his pocket. 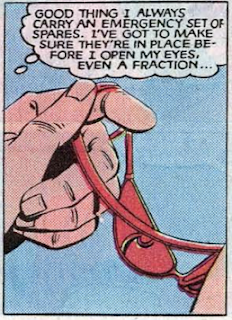 Like a Phoenix From the Ashes
Nightcrawler gives Rogue (and any new readers) the rundown of Jean's rise and fall as Phoenix, appropriately enough given the apparent return of Dark Phoenix at the end of the issue. 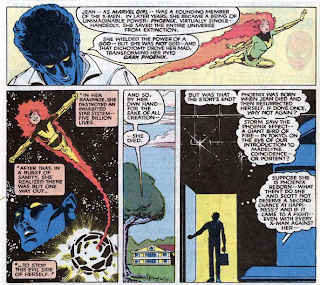 For Sale
Okay, a Kool-Aid man video game is probably the most 80s thing, ever. 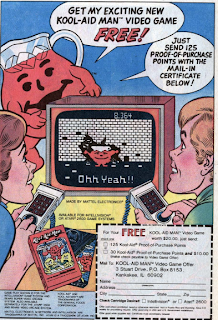 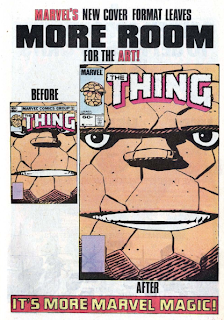 Teebore's Take
With this issue, Claremont and Smith continue the pattern of their run, following up the two-part Wolverine/Japan story with a done-in-one focusing on characterization and subplots. With Wolverine, Rogue and Storm having headlined the last story, and aptly titled "Romances", the issue largely focuses on the romantic lives of Scott & Maddy, Professor X & Lilandra, and Colossus & Kitty (with Nightcrawler getting a brief moment of romantic contemplation). It is the final (and arguably best) showcase for Smith's uncanny ability to wordlessly depict emotion and character. Most significantly, the somewhat-breakneck pacing of the Scott/Madelyne relationship escalates to the point where the couple gets engaged, dovetailing with the simmering conflict that's been percolating, unknown to them, since the X-Men returned from space in issue #167, setting the stage for the culmination of almost a years' worth of Phoenix hints and teases and the final regular collaboration of Claremont and Smith next issue.

Next Issue
Tomorrow, the New Mutants are taken to Nova Roma in New Mutants #9, and next week, Mastermind's schemes come to a head as we learn whether Madelyne is Dark Phoenix reincarnated in Uncanny X-Men #175.
Newer Post Older Post Home
Posted by Austin Gorton at 9:00 AM