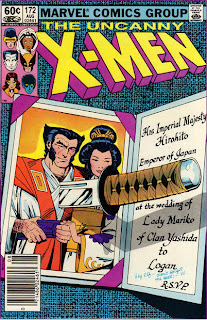 In a Nutshell
The X-Men go to Japan for Wolverine's wedding.


Plot
The X-Men, including their newest member, Rogue, arrive in Japan to celebrate Wolverine's upcoming wedding. Wolverine is reluctant to welcome Rogue, but Mariko insists she is a guest and offers her the same hospitality as the rest of the X-Men. Outside, Silver Samurai is watching the X-Men, hoping to strike while the X-Men are off guard, when he is attacked by Yukio. Sensing the fight, Wolverine has Nightcrawler teleport him into the fray. Wolverine fights off Silver Samurai while Storm saves Yukio from a fall. As the X-Men discuss Silver Samurai's recent attack on the New Mutants and his possible connection to Shingen Yashida's criminal empire, Viper sneaks into the apartment and poisons the X-Men's tea just as Mariko leaves for a secret meeting. Wolverine senses the poison in time to warn Storm, but not before the rest of the X-Men succumb to it. 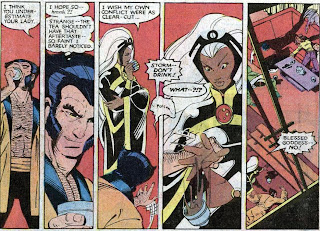 In Alaska, a worried Scott goes through Madelyne's personnel file at his grandparents airline. His brother Alex insists he needs to let it go, but Scott is too obsessed with the possibility of a connection between Madelyne and Phoenix. In a warehouse in Japan, Mariko meets with Silver Samurai and Nabatone Yokuse, leader of the Yakuza. But when Silver Samurai attacks Mariko, she reveals herself as Yukio in disguise. Outside, Viper attempts to slay Mariko in her car, but Storm knocks out the villain first. Attempting to help Yukio in her fight, Storm summons lightening, but quickly loses control of it, igniting explosives within the warehouse. Yukio manages to throw Storm clear of the blast. The two women watch as a Phoenix firebird appears over the warehouse, as a pleased Nabatone Yokuse watches from the shadows. At a nearby hospital, Wolverine leaves Mariko with the X-Men as he heads out in search of Silver Samurai, reluctantly allowing a recovered Rogue to come along.

Firsts and Other Notables
Viper and Silver Samurai, fresh off their appearances in New Mutants #5 and #6, follow the X-Men to Japan. New Mutants #6 established that Silver Samurai was Shingen's son and promised heir; here we learn he is Mariko's half-brother, and intends to fight her claim to Shingen's inheritance.

A footnote this issue points the readers to New Mutants #5-7, and reveals that, in the wake of the explosion at the end of New Mutants #6, the X-Men believe Karma is dead.

Yukio, Wolverine's would-be lover from his limited series, pops up, and introduces Storm to her devil-may-care, live-life-in-the-moment philosophy, an outlook which Storm finds appealing, marking the beginning of the final step in the recent transformation of Storm's character. 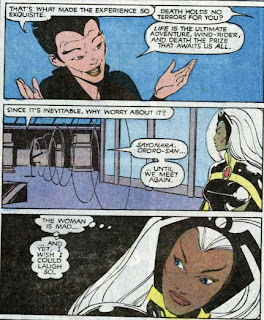 Nabatone Yakuse, the Yakuza leader attempting to officiate the dispute between Mariko and Silver Samurai, will eventually be revealed as Mastermind in disguise, and the Phoenix firebird which Storm observes over the exploded warehouse is caused by him as well, another part of his unfolding (and as of yet still unknown to the readers) plan to convince the X-Men Phoenix has returned.

A Work in Progress
Wolverine, absent from the last several issues, meets Lockheed for the first time in this issue, and also learns about Rogue joining the team. Wolverine uses a similar rationale for Rogue's joining the team to the one Professor X used last issue; he shouldn't be surprised that any outfit that would have him would take in someone like Rogue. 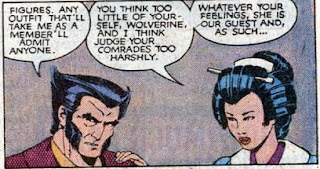 The de-aging of Rogue continues, as Wolverine refers to her as a "kid".

Mariko continues to worry about the disgrace her father has brought to their family, and is determined to set things right on her own, without Wolverine's help. 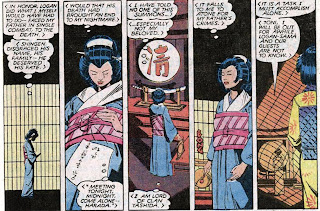 There's a nice moment that underscores the differences between Wolverine and Kitty, in which Kitty suggests the X-Men question Shingen now that Wolverine has "handled" him. 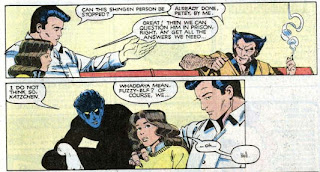 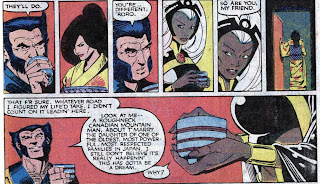 Storm is worried about the recent difficulties she's been having controlling her power.

We learn that not only did Madelyne Pryor survive a plane crash on the same day Jean Grey died, but that the crash occurred at the same moment of Jean's death. 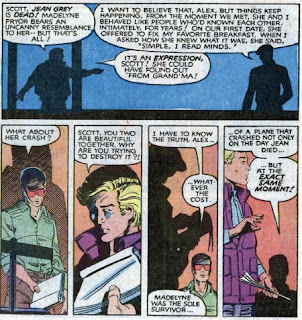 Rogue says that the poison which Viper used on the X-Men didn't have the same effect on her because she's half alien; while quasi-true (Ms. Marvel's original powers derived from her genetics being infused with alien Kree DNA), a more accurate explanation would simply be that the invulnerability she stole from Ms. Marvel protected her.

I Love the 80s
I'm not entirely sure how Yukio knows that particular piece of exposition.

The Best There is at What He Does
Wolverine's healing factor is able to counteract the poison enough so that even though he's sick, he's still on his feet.

It's in the Mail
The letters page returns, with the conceit that all the letters are being answered by Kitty Pryde, a gimmick the book will use occasionally, featuring other characters, in the months ahead. 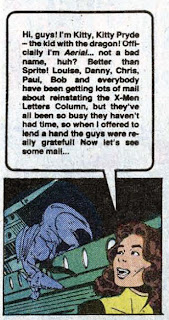 One of the letters includes this one from Jim Shooter, giving the team a hard time about the lack of a letters page in recent issues, while also somewhat creepily calling himself a pervert... 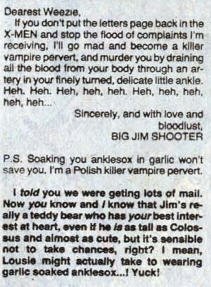 Teebore's Take
Though published several months after its conclusion, this issue picks up right where the Wolverine limited series left off, an astonishing bit of continuity management that simply does not appear very often in today's comics. It also follows up on threads from the last few issue (the induction of Rogue to the team, the still-unrevealed Mastermind plot), and previous issues of New Mutants (where Silver Samurai and Viper decided to launch their attack on Wolverine and the X-Men). Yet if you were to hand this issue to someone cold turkey, it would still be an engaging, enjoyable read. In that regard, this is something of the quintessential Claremont comic, seemingly-effortlessly drawing on past continuity to add depth to the story while still presenting the material in such a way that knowledge of that continuity only deepens appreciation for the story rather than hindering it.

At the same time, it also features strong characterization (such as the exchange between Wolverine and Kitty, or Storm and Wolverine's discussion of their recent changes) and dynamic art (it goes without saying that Smith knocks it out of the park once again, both in terms of his action choreography and the quieter, character driven moments, but there's tons of great artistic touches throughout, such as the subtle hints of the truth when Yukio is disguised as Mariko, or the glee expressed by Mastermind-as-Nabatone when he recognizes the ruse). There are other stories which are more significant to the ongoing narrative of X-Men and more groundbreaking in what they bring to superhero comics, but this issue and the next represent one of my all time favorite X-Men stories, featuring work from two creators at the top of their game. This two- parter is simply, to steal a phrase, really, really, really...good.

Next Issue
In New Mutants #7, it gets even more 80s as we trade in Team America for a Mr. T pastiche, and then Uncanny X-Men #173 concludes the X-Men's adventure in Japan by getting Wolverine to the altar.
Newer Post Older Post Home
Posted by Austin Gorton at 8:00 AM