Between baseball and presidential debates, a lot of shows took this week off. Which is good, since I had a busier than usual week. Here then is a shorter-than-usual post.

Once Upon a Time: The Crocodile 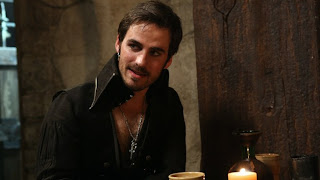 Judging from all the pre-season hype, the show intends to poise Hook as this season's Big Bad, or at least one of them. This episode served as alright introduction to him, though we have yet to really see OUAT's take on the character (most of this episode he was Almost Hook). I prefer my pirates with a little less angsty eyeliner, but I suppose that's the world Johnny Depp has created. The climatic moment when Hook picks up the, um, hook, would have resonated more if we didn't already know he was Hook thanks to all the ads/interviews/press releases, etc. I don't even go out of my way to look at that stuff and I still knew he was coming. That said, as the show continues to soften the edges of Regina and Mr. Gold, more villains is not a bad thing.

Other Thoughts
Similarly, I'm not sure if the Smee reveal was meant to be shocking or not; it seemed pretty obvious to me.

I was, however, honestly surprised when it turned out Hook had pocketed the bean, and I like the idea of the bean being the means of getting to Neverland (I wouldn't object to seeing the show's take on Peter Pan).

Also, making Rumpelstiltskin the crocodile who took Hook's hand was a nice touch, the kind of tweak to an existing story this show does well (it was also a nice use of Rumpel's scaly skin).

The business with Belle's father was kind of muddied; I wasn't entirely clear why he was doing what he was doing, or why Belle hadn't at least said hello after she was released from Regina's secret asylum. Her father just seemed to jump to the "wipe her memory" solution awfully fast.

I'm not sure if it was made explicit before, but we find out that Rumpelstiltskin created the Storybrooke curse as a means to get to the world to which his son was transported, which feels like an important part of the show's mythology. 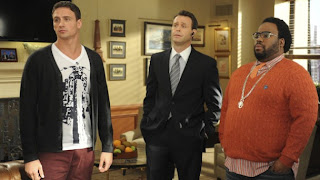 While the "women aren't funny" plotline was clearly intended to be the A-plot (and, with this being the show's last season, could be viewed as a microcosm of Tina Fey's mission with the show as a whole, though really, that isn't even a question that needs to be asked because women can be funny and anyone who doesn't seriously believe that is an idiot), I was much more amused by Jack's storyline involving his coterie of women (and coming to terms with his place within a similar coterie of men), though I'll freely admit that could just be due to the presence of Ryan Lochte as Zarina's sex idiot. I love pop culture's continued depiction of him as an idiot man-child.

Other Thoughts
Love that Tracey had sent his "women aren't funny" tweet to Stephen Hawking.

Jenna's plot was the usual Jenna wackiness, though I did like the way it sweetly intersected with Jack's plot, and the notion that middle aged actresses are cursed with playing “Kevin James’ mean wife who he’s sick of having sex with.” 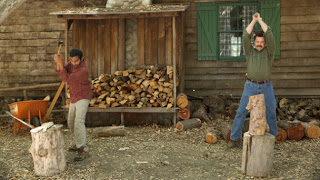 For whatever reason, this episode didn't click with me as much as the previous three this season had. It was still plenty funny (even an average episode of this show is a cut above most shows, and this certainly was an above average episode), but it felt like it never quite reached its potential. Leslie taking on the morally-superior Langmans (who are absolutely a parody of Michelle Bachman and her husband, or am I reading too much MN bias into that?) over, of all things, sex ed for the elderly (because if old people learn about safe sex, it's only a matter of time before we get babies with condoms), is the kind of politically-based whackiness this show excels at making funny, but for whatever reason, the material just wasn't as transcendent as usual. So, you know, an "A" instead of the usual "A+", which is a testament to how good this show is.

Other Thoughts
Still plenty of funny material here, especially the image of the congressman for whom Ben and April work literally staring at the wall until he's required to issue homespun aphorisms or practice his stump speech.

The Tom/Ron plot was a little "been there, done that", but I did enjoy Tom's complete listlessness when cut off from his screens, including his inability to find his office without GPS.

Perd Hapley is also never not-funny, and there was tons of Perd in this episode. "Perd-verts"? Classic.

Andy: Do pubic hairs get longer the older you get? Because that’s happening to me, what do I do?

Ben: Why would a robot need to consume organic matter? 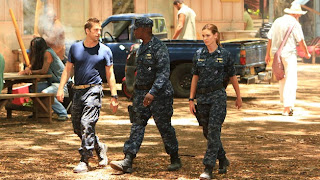 I'm still not entirely sure where this show is going - it's clearly trying to develop some mythology, at least in terms of what happened in the pilot/what's going on in the government, yet it never seems terribly concerned with delving too deeply into those concerns (even though you'd think it'd be Chaplain's number one priority). Thankfully, this episode's self-contained adventure of the week was interesting enough to more-or-less distract from those overarching questions, while still hinting at the development of the unfolding mythology and taking some large strides towards addressing some of the logistical questions central to its plot.

Other Thoughts
The stay/go list was a clever way to tackle the issue of authority in a situation built on ignoring authority, one of the central questions of the show. It was also fun seeing Marcus and Sam working behind the scenes to keep the "stay" list as long as possible. I hope the show follows through and actually does allow those people who are still planning on leaving to leave.

Fake Sawyer's involvement in the events that led to the nuking of Pakistan? Color me intrigued (why did it take anyone on Chaplain's crew this long to make that connection?). Fake Sawyer getting in a fight over his dead friend's body? Not so much.

I have no idea what the hell Sophie was doing with the dirt, nor what the Mayor was expecting of her. Moreoever, I'm not sure if the audience is supposed to be in the dark, or if I just wasn't paying close enough attention. Was she testing the soil for gold or something? Her episode-ending conversation with Sam clearly had a double meaning, but I have no idea what it is (insert your favorite Smoke Monster/Golden Pool of Light/etc. Lost joke here).

This whole "lawyer friend seduces Sam's wife" plot already has my eyes rolled back into my head, but it's always nice to see Jesse Schram, and her going off on the reporters was awesome. That's exactly what I'd do: go on every media outlet and point the finger at the government. They already took everything away from her. 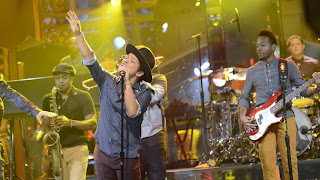 Give Bruno Mars credit: he didn't slink into the background of the show, emerging only to perform his musical numbers. Unfortunately, the end result was, the return of Stefon notwithstanding, another thoroughly average one. Mars did his best (his standout sketch was clearly the Pandora one, in which he not only did a series of impressions, he did musical impressions), but most of the sketches lacked a strong central idea and standout jokes.

Other Thoughts
Always happy to see a Stefon appearance, and I appreciate both that the show resists the urge to trot him out every other week and that Hader always tweaks the formula slightly. The biggest laugh from me this time was that Jewish Dracula is called Sydney Applebaum.

I also appreciated Seth Meyers referring to the Winter Olympics as "48 different kinds of sledding".

The recurring Brad Pitt parody commercials were amusing enough, especially if you've seen the original, but like most of the other sketches, they failed to develop a strong hook and never really went anywhere.

With the show off next weekend, this was ostensibly the Halloween episode, though only one sketch played that up.

Second episode in a row to feature a song in the monologue, though this one was more understandable.

Favorite Sketch: "Merryville Halloween"; it's pretty much the same sketch every time out, and it's certainly not as uproariously funny as it was the first time, but they haven't overdone it yet so I'm still pleased when it pops up, this was a pretty weak night overall, and Bill Hader's creepy robot smile cracks me the hell up every time.
Least Favorite Sketch: Haters, which had a weak premise and didn't end so much as stop. It would have been terrible closing the night, let alone leading it off.

Obama: The best thing about my plan is, you can sit on it and spin.