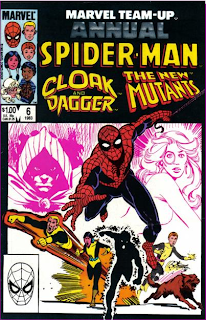 In a Nutshell
Sunspot and Wolfsbane get injected with an experimental drug.

Plot
Spider-Man swings by a warehouse containing a chop shop at the same time Cloak and Dagger arrive. The three of them take out the criminals working in the shop, then discover a group of dead teenagers in a back room. Cloak and Dagger explain that the kids were likely killed by the mobsters responsible for giving Cloak and Dagger their powers via a synthesized drug, as the mobsters are now attempting to re-synthesize that drug and testing it on runaway kids. Meanwhile, the New Mutants emerge from a Broadway play, but instead of heading back to the X-Mansion, Roberto leads them into an arcade. Inside, they get into an argument with some local kids, one of whom pulls a knife on Rahne, leading to Roberto powering up and punching her assailant. A fight breaks out, and Cannonball orders the New Mutants to run back to the bus station, but they get lost. Eventually, the kids from the arcade catch up to them, and Rahne and Roberto are knocked unconscious in the melee. Unseen by their teammates, they're taken by a pair of shadowy figures. 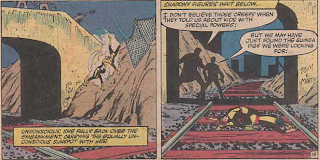 The fight breaks up when the police arrive, with Sam and Dani running off on their own, determined to find their friends. Needing to rest, they go inside a church, the same church where Cloak and Dagger live. Spider-Man recognizes Sam and Dani's uniforms, and they tell the others about their missing friends. Worried Rahne and Roberto could be subjected to the mob's drug experiments, Cloak and Dagger depart to track them down. An hour later, Rahne and Roberto awaken inside a meat packing plant and are injected with the experimental drug by a pharmacist working for the mob. Just then, Cloak & Dagger, Spider-Man, and the rest of the New Mutants arrive. The mobsters are defeated easily, but Rahne and Roberto transform into monstrous versions of themselves. Dagger is able to use her light knives to revert Rahne to normal, transferring the effects of the drug to Dagger in the process, while Cloak envelops Roberto in his cloak, removing the drug from his system. Cloak then absorbs the drug from Dagger as well, restoring her to normal. Sam offers Cloak and Dagger a place at Xavier's school, but they decline, determined to remain on their own.

Firsts and Other Notables
Spider-Man and the New Mutants form the titular team-up in this issue, with Cloak and Dagger billed as guest-stars. Created by Bill Mantlo and Ed Hannigan and debuting in Spectacular Spider-Man #64 a couple years before this issue, Cloak and Dagger were a pair of runaway teenagers who were injected with an experimental form of heroin by the criminal Maggia organization which activated their latent super-human abilities. Since then, they've worked together to take down drug dealers and help other teen runaways (Dagger can generate "light daggers" which can temporarily paralyze people and help cure drug addictions, while Cloak's body as been transformed into a portal to a dimension of darkness, through which he can teleport himself and passengers or transport foes). They had a relatively high profile throughout the 80s, making a fair number of guest appearances and starring in a couple limited series and one ongoing series, but they never quite became mainstays of the line and have been relegated to the occasional guest appearance in recent years. 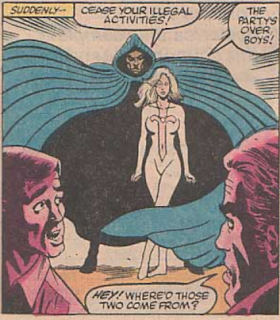 Sunspot and Wolfsbane are transformed into monstrous versions of themselves, the ramifications of which, as well as their interactions with Cloak and Dagger, will be the focus of a future story in New Mutants. 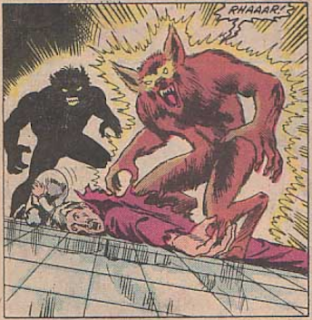 It's not entirely clear where this story fits into the New Mutants timeline. They are sans Karma, so it must occur after issue #6, but the team is shuffled off to Brazil in the wake of Karma's apparent death, and they remain out of the country until the conclusion of the Nova Roma story in issue #12, while Professor X remarks on the events of this issue in New Mutants #13. So the New Mutants trip to the city in this issue either occurs between the pages of issue #7, before they arrive in Brazil, or between issues #12 and #13, before Amara arrives at the school on the opening page of issue #13 (or else it occurs prior to Karma's departure, and she simply didn't accompany her teammates into the city).

This issue is written by Bill Mantlo, who contributed the fill-in issue X-Men #106 and is penciled by Ron Frenz, who will go on to have lengthy runs on Amazing Spider-Man and Thor, and will become one of the favorite partners of writer and future Marvel Editor-in-Cheif Tom DeFalco, helping him create the short-lived MC2 line of comics set in an alternate future of the Marvel Universe, featuring the fan favorite Amazing Spider-Girl book.

A Work in Progress
We get an indication that Roberto might enjoy Stevie Hunter's dance classes more than you'd expect. 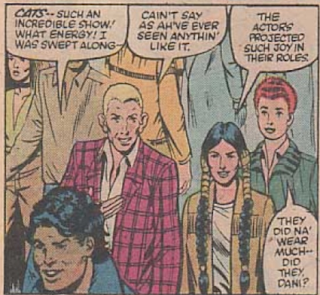 Rahne finds the dancing in Cats hard to reconcile with her "highlands teachings". 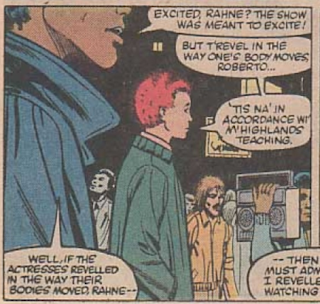 Narrative captions continue to refer to Dani as "Psyche".

For once, Spider-Man actually actively subverts the team-up cliche of the heroes fighting each other for a time before teaming up against the real villains. 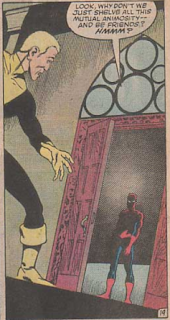 Cloak and Dagger are offered a place at Xavier's school, but they turn it down, determined instead to continue their fight against drugs and learn about their powers on their own. 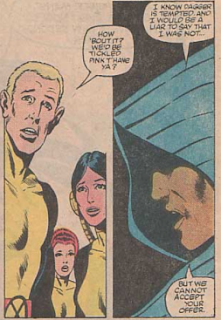 I Love the 80s
The New Mutants are in New York City to see Andrew Lloyd Weber's Cats, and later hang out at an arcade. 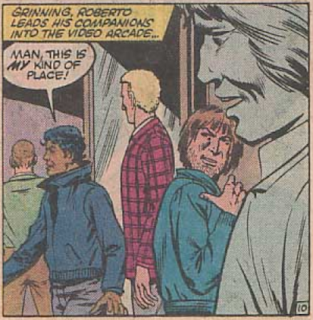 The sound effect associated with Cannonball's blast in this issue suggests Sunspot and Wolfsbane aren't the only characters on drugs. 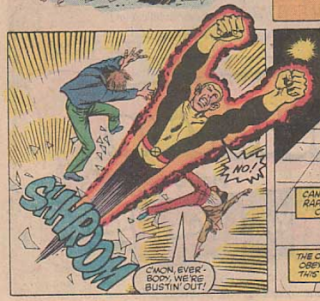 They're Students, Not Superheroes
Cannonball disputes the notion that the New Mutants are X-Men-in-training. 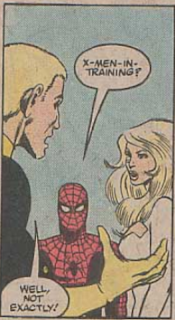 Teebore's Take
In addition to the fact that the events of this issue will be the focus of a story in the regular New Mutants title down the road, the reason I wanted to look at this issue was to see how, a little more than a half dozen months after their debut, the New Mutants are depicted outside their own title. Perhaps because writer Bill Mantlo was friends with Claremont, their characterization here is fairly consistent with how they're presented in their own title. Roberto is perhaps a bit more brash, Sam a bit more of a confident leader than we've yet to see (in that regard, this Sam seems more like his later self), but for the most part, the New Mutants seem like the New Mutants. Mantlo even makes a point of stressing that they are not quite X-Men-in-training. The story itself is pretty standard, managing to get all the characters together with minimum fuss (with the help of a few obvious coincidences) and featuring the kind of "drugs are bad" message that characterized many Cloak and Dagger stories. Like the New Mutants' own book at this time, nothing here is groundbreaking. But it does make for an interesting look at how the New Mutants are being depicted in the greater Marvel Universe.

Next Issue
Mastermind makes his big move in Uncanny X-Men #174, while the New Mutants are taken to Nova Roma in New Mutants #9.
Newer Post Older Post Home
Posted by Austin Gorton at 8:00 AM