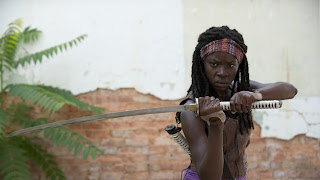 Now that's more like it: this episode showcased what I've always wanted to see more of on this show: a group of beleaguered individuals competently tackling the problems of living in a world overrun by zombies. Finding a place to hold up, clearing the prison yard, pushing deeper inside; these are small goals, nowhere near the level of rebuilding a functional society, but they fit the scale of the show, and gave the characters believable obstacles to overcome beyond just "surviving" (and in overcoming them, they give the characters some level of victory, however small, and prevent things from feeling too hopeless). The cold open, especially, was a thing of beauty, as we watch Rick and company clear a house of zombies, scrounge for food, setup camp, only to hurriedly rush out the back and into their cars, moving on, when a wave of zombies appear. Without a word of dialogue, it's made clear exactly what the situation is, how certain characters have changed, and how the group as a whole is surviving.

Of course, the best episodes of Walking Dead are its premieres and its finales; getting everyone to someplace and getting them out of that place seems to bring out the best in the show, likely because those events allow the show to focus on the zombie killing instead of moments of poor characterization. So it remains to be seen if the balance between action and character on display in this episode, and the ability to do more showing and less telling, can be maintained in the episodes ahead. For all we know, the episode-ending cliffhanger reveal of non zombies inside the prison could just lead to another Farm Redux as Rick tries to share/control the prison with these newfound people while everyone else settles in and starts bitching about who's not doing their share of the cooking. But hopefully the strong storytelling on display in the opening, and really, in all the action scenes, is an indication of a show more confidant in its strengths, and a sign that while Rick and his group may have found a respite, they won't be able to rest for too long.

Other Thoughts
I'd be perfectly fine with the group spending the season (or more) at the prison, so long as the focus remains on making it safe/functional, with plenty of excursions and/or zombie incursions, and less so on petty interpersonal issues.

We received just a few brief scenes of Michonne (who was never named on screen, but we all know who she is by now) and Andrea, but I'm intrigued by the bond they formed over the winter. It made sense for the show to jump ahead in time (and worked to its benefit), but I hope that jump doesn't end up short-cutting the Michonne/Andrea friendship, leaving us with a bunch of scenes where we're told how deep their friendship is now.

I remain curious why Michonne has the chained zombies with her. Are they her parents or family members she's keeping alive for sentimental reasons? Does their smell ward off other zombies?

This episode took some good strides towards rehabilitating some of the more annoying characters; Carl is finally being useful and allowed to participate in the group without a crap ton of debate, and Laurie had a nice monologue where she finally admitted she turned Rick and Shane against each other.

Other nice character moments: Carol and Daryl's scene atop the car, and Carl's (nicely understated) burgeoning crush on Maggie's younger sister (whose name still escapes me...).

For a show that once honestly had a scene in which a woman was taken to task for not doing her share of the cookin' 'n' the cleanin', it was nice to see Maggie as part of the central zombie killing squad, and that Carol has become a good shot.

I never would have expected this, but Hershel has grown on me to the point where I really don't want him to die. Rick hacking off his leg was delightfully gruesome, though. Someone needs to cauterize that stump fast.

Nitpick time: putting aside the fact that everyone is a really good shot (I guess we can chalk that up to lots of offseason practice, though I did like the moment where Carol almost shot Rick)), if ammo is in such short supply, why waste it on the zombies in the prison yard? They were spread out enough that the they probably could have been taken out hand-to-hand. Otherwise, they could have been lured to the fence and just taken out assembly-line style. Also, when exploring deeper into the prison, why not stab the brain of every body you find laying on the ground, even if they appear to be dead, just to be safe? If they had, Hershel wouldn't have been bitten.

Finally, a quick housekeeping note: I'm not quite sure yet which day these posts will appear regularly, as I still haven't settled on a preferred viewing method of the show this season (this episode we watched online thanks to AMC). My hope is to have the Walking Dead posts up every Tuesday, but that may not be feasible. We'll see. At any rate, I'll be sure to tweet out each post as it goes up, so follow me on Twitter (@AustinGorton) and once I've settled on a viewing/posting schedule, I'll be sure to let everyone know.
Newer Post Older Post Home
Posted by Austin Gorton at 10:00 AM