I was away from the house last night, so no new Thursday night shows this week. But here's what I did watch:

Once Upon a Time: Lady of the Lake 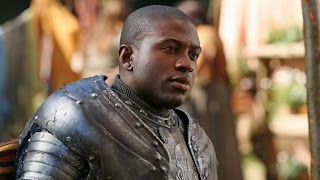 It's good to know that whether in Storybrooke or Fairy Tale Land, Emma can be an insufferable ass. I know she's lost her bearings and has parental issues, but it's really not the best time or place to question every frickin' thing your mom says, especially when your mom happens to be a former queen of the land in which you find yourself. I really hope the little mother/daughter moment the pair shared at the end of episode means Emma will be a little less grating during her time in FTL.

Other Thoughts
I know this show can move fast, but the transition from Lancelot the fearsome new general to Lancelot the kindly friend of Snow White in the Fairyback almost gave me whiplash...

When Snow first mentioned the wardrobe, my first thought was "they're going to Narnia?" before I realized what she meant.

I honestly kind of felt bad when Henry stood up Regina; she seemed so genuinely happy that he asked her to lunch.

Speaking of which, I wonder who the new mayor is going to be, now that Regina has been asked to leave the position?

Cute moment when Charming gave Henry wooden swords so he can start practicing swordfighting, but where the hell did he buy them? They even had little price stickers hanging off them.


How I Met Your Mother: Who Wants to be a Godparent? 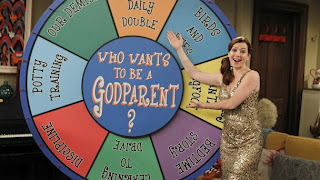 While the end result was pretty funny (Marshall's made up games are always funny), the premise was rather flimsy: assuming Lily and Marshall are going to make one of their friends Marvin's guardian in the event of their untimely deaths, Ted is pretty much the obvious choice, right? And that's even assuming Barney and Robin would be interested in having that job. I can maybe see either one competing with Ted just for bragging rights/to screw with him (and I get that, ultimately, all three were really competing for Lily and Marshall's friendship), but at the end of the day, it seems like a bit of stretch for both Barney and Robin to be fighting so actively for guardianship of a kid when both have expressed little desire in being parents themselves. But once you get past that hiccup, everything else was pretty funny.

Other Thoughts
I'm glad the conflict between the group was resolved relatively quickly (and within this episode) as the fact that Lily and Marshall can no longer close down McLarens should have been a given, while it's also important for them to listen to their friends problems, regardless of the severity.

While sweet, legally speaking, I'm not sure how listing three different people with no legal relationship to one another (yet) as a guardian would work.

I continue to be bothered by the marginalization of Victoria; also, apparently Ted never told her (or her father) about Klaus wanting out of the wedding too, because Klaus is probably just as responsible for paying back Victoria's father as Ted.

Best moment was probably the near-instant flashback to Marshall re-opening the door to hear the end of Barney's "The Boobs on the Bus" song.

Robin: As the only one here packing a vag, I’ve got a natural instinct for nurturing and crap like that! 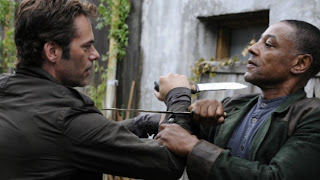 This wasn't quite the defining "now I'm hooked" episode I was hoping it would be, but it was still solidly entertaining, and consistent with the show's still-developing style. I would have liked to see Miles and Charlie succeed in rescuing Danny, simply because it would have refocused the show away from its most annoying tendencies, but if the end of the episode holds up and this marks the point at which Charlie stops being all whiny and becomes a little more focused and intense, then it can be called a success for that if nothing else.

Other Thoughts
Mrs. Teebore called that Nipples was Neville's grown son fairly early in the episode; good for her.

There were a couple instances in this episode where characters had an opportunity to kill Neville with little difficulty and failed to take advantage of that opportunity. I get that the show isn't going to kill off one their chief antagonists (and best characters), but then don't put characters in a position where they can kill him but just don't for inexplicable reasons.

The flashback to Neville pre-blackout was interesting, but it probably could have used some more time. As it was, we could infer the transition, but his change from loving family man to "I'm going to teach you how to kill, son" was a little abrupt. Hopefully we'll see more of that transition in future flashbacks.

I do like the sense we're getting of how character on either side of the militia divide were affected by the blackout: for people like Google Guy and Maggie, the blackout was the worse thing to happen to them, while for characters like Neville and Monroe, who were relatively inconsequential people pre-blackout, it made them important.

Neville's wife looked very put together; things must be better in Philly, especially if you're the wife of a high-ranking militia member.

I appreciated the look at the US map and the discussion of the different nation-states that have sprung up; a nice bit of world building.


Glee: The Break Up
Give it credit: when I heard Glee was doing a break-up episode, I figured we'd get one quasi break-up out of it, not three-ish (it remains to be seen whether Kurt and Blaine are totally kaput, and I'm counting the Will/Emma scenes as a fight). It's especially surprising, considering the break-ups give the show less reason to check in with Finn and Santana, who, if I didn't know better, appear to have returned just to be written out. And give the show credit, too, for handling the breakups with the proper amount of gravity; Glee usually does these moments of heightened teenage emotion really well, and this was no exception.

Other Thoughts
It was good to see Finn back; I didn't realize how much I'd missed the big goofball. I also thought Cory Monteith did a great job of depicting his listlessness.

Similarly, Blaine's reprise of "Teenage Dream" was brilliantly shot and performed, to the point where it was almost painful to watch.

Rachel and Finn's break-up scene was a great bit of writing, true to both their characters, yet I was still genuinely surprised when Rachel was the one to call it off.

The whole "Left Behind" plot was the episode's one misstep, a subplot that was tonally dissonant from the rest of the episode that made a half-hearted attempt to connect itself to the break ups.

Will, you're an ass; it was one thing to just assume Emma would want to drop everything and follow you to DC, it's another to get mad when she doesn't want to.

I was also surprised at how affecting the flashbacks to past episodes during the closing number were; this show has always had a lackadaisical relationship with it's history, so it's good to see that when it wants to, it can use that history to good effect.

Oy, Grease. As I've said before, it's not my favorite show, so I'm not looking forward to watching Glee perform it (whereas I was very excited to see Glee's take on West Side Story, a show I prefer more, last season).

Favorite Song: As though to make-up for the last couple episodes, this one had several songs I really enjoyed, from "Barely Breathing" to "Don't Speak", but Coldplay's "The Scientist", which ended the episode, was a fantastic showcase for everyone, gave us a chance to hear Brittany and Emma solo, and fit the tone of the episode perfectly; one of the strongest closing numbers in a long time.

Santana: I mean, I’m not jealous, I just think that it’s insane that all Porcelain had to do to get an internship with Vogue.com was take photos of every ridiculous outfit he’s ever paired with a Cossack hat and a see-through raincoat and then show up at an interview where he is lauded as a visionary because his jodhpurs happened to match his riding crop.

Brittany: Sad songs make me really sad and I don't want to be sad. 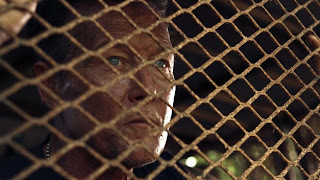 This episode worked a bit better than the last one, in large part because the action scenes aboard the sub were better staged and executed than the action scenes on the island last week. I also appreciate that the show is continuing to make a thing out of the idea of people following orders when their commanders aren't doing the same.

Other Thoughts
Words cannot express how much I don't care about the adventures of Han Solo and the island Gelfling (thanks Blam!).

I get why Marcus did it, and why the show wouldn't want the Terminator locked up for very long, but I still think releasing the COB is going to bite everyone in the ass.

Marcus being late in delivering Julian his box full of MacGuffins, leading to the death of one of the three hostages, was an intense moment that gives me hope for the show; a lesser show would have had Marcus save all three hostages and/or follow through on Sam's desired retribution. This way things are more ambiguous and rife for conflict. 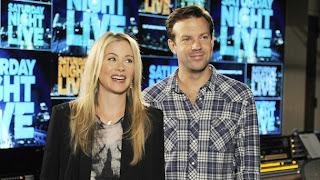 A pretty lackluster episode, with a couple strong sketches, a couple weak ones, and two recurring bits that I could have done without. The Californians returned, and led off the night, and my biggest problem with it remains that it's too long. It not only repeats the same gag each time out, it repeats the same gag three times a sketch. If they just cut it off at the first "commercial break", I'd enjoy it more despite the repetition (the other recurring bit featuring the Booker T. Washington high school, did nothing for me either the first time or this time, though it was probably Christina Appelgate's strongest performance of the night).

The cold open was pretty great too, but I've always loved Sudeikis' Biden.

The knock-off Muppets version of the Swedish Chef is Dane Cook. Love it.

Jean K. Jean is one of those random "Weekend Update" characters for which I have inexplicable affection. Maybe it's because he reminds me of Batroc ze Leaper by virtue of being stereotypically-French. "Zut Alors!"

The Odyssey sketch almost won "Favorite Sketch of the Night" honors; it was one of those oddball sketches that worked because everyone sold it, despite a flimsy presence on paper.

Favorite Sketch: Tech Talk, in which bloggers nitpicking the iPhone 5 are confronted by the Chinese factory workers who make it. “Let’s see, what does America make? Does diabetes count as a product?”
Least Favorite Sketch: Probably the last sketch of the night, with Christina Appelgate as a Fosse-obsessed dance instructor. More than anything, it was boring.

Liam Neeson: I have a very particular set of skills. Like fighting and growling. And I speak un poco Spanish.

Denzel Washington: Are you a shark or a turtle? It’s a simple question, are you a porpoise or a narwhal?!?