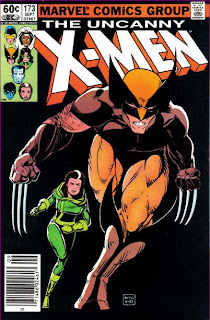 In a Nutshell
Wolverine defeats Silver Samurai, but is left at the altar by Mariko.

Plot
Wolverine and Rogue tear through the Yakuza, looking for information on Nabatone Yakuse, hoping he'll lead them to Silver Samurai. Finally getting a location, they set off. Elsewhere, Storm and Yukio seek sanctuary from the Yakuza, but are turned away by Yukio's friend. Suddenly, they're confronted by a gang of muggers. Outside the city, Rogue and Wolverine arrive at Nabatone's estate, but find that the gang leader has been dead for over a week, meaning the Nabatone Mariko met with earlier that night was an imposter. Wolverine realizes they've been suckered, sent out of town and away from Mariko and the recovering X-Men. Meanwhile, Storm and Yukio make quick work of the muggers, with Storm reveling in the use of her powers. Back at the hospital, Viper and a cadre of ninjas take out Mariko's guards, but Rogue arrives and clears the room. 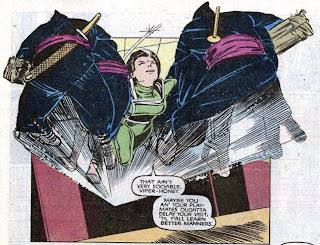 Inside, Silver Samurai emerges, and engages Wolverine in a duel. Wolverine defeats him, but Mariko entreats Wolverine to spare his life. As Silver Samurai collapses, Viper comes back inside and fires on Mariko. Rogue flies past the blast, pushing Mariko and Wolverine clear and taking the full brunt of it herself, overloading the gun. As Viper and Silver Samurai flee, Wolverine willing allows Rogue to absorb his power to help heal her injuries. A week later, Mariko is visited by a mysterious stranger but quickly forgets about his visit. The next day, the X-Men attend Wolverine and Mariko's wedding, and are shocked when Storm arrives sporting new clothes and a Mohawk. As the ceremony begins, Mariko emerges and calls off the wedding, declaring that Wolverine is not worthy, leaving him stunned and heartbroken at the altar.

Firsts and Other Notables
This issue marks the debut of Punk, or Mohawk, Storm, as the character transformations she has undergone in the preceding issues, including her attraction to Yukio's more wild, carefree outlook on life, comes to a head and is marked by a visual transformation to leather biker gear and a Mohawk. Interestingly, Paul Smith submitted a batch of designs for Storm's new look and only included the biker gear/Mohawk look as a joke, but that was the one editor Louise Simonson decided to go with (based on the idea that the readers were going to object to a new look for Storm no matter what, so why not go all out?). You can read more about that situation here (which also includes the somewhat surprising fact that Smith's departure following issue #175 was apparently planned from the beginning of his run).

Punk Storm is a somewhat divisive iteration of the character amongst fans. As I've mentioned before in comments on other posts, I'm a big fan of it, as I find the juxtaposition (both visually and in terms of character) between "classic" Storm and the more hard-edged, pragmatic Storm represented by her punk attire fascinating. Watching Storm struggle to reconcile the two (as well as deal with her upcoming power loss) throughout the "Punk Storm era" is about the only time in her over thirty-five years of existence that I've found the character interesting.

We get our largest hint yet that Mastermind is the villain manipulating things behind the scenes, as we get a glimpse of his legs (featuring the tails of his coat) and mouth (featuring his cigarette and muttonchops). 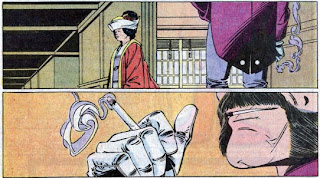 Mariko calls off her wedding to Wolverine, though we'll soon learn this was done due to the influence of Mastermind.

This issue more or less serves as Rogue's coming out party to the X-Men, the first time we've seen her in action as part of the team, and she earns, at the very least, the begrudging respect of Wolverine in the process.

The X-Men officially meet Madelyne Pryor in this issue, as Scott brings her along to Wolverine's wedding. 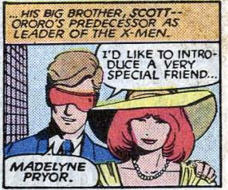 Rogue's head is added to the corner box on the cover.

A Work in Progress
Storm's appearances in this issue before showing up with her Mohawk involves her attacking some thugs with Yukio and enjoying Yukio's devil-may-care attitude. She also mentions this is the first time she's willingly used her powers to inflict pain on someone. 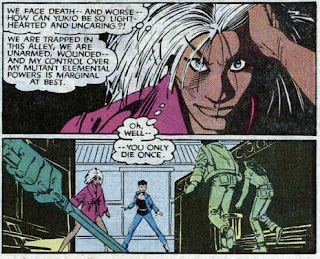 It's explicitly stated that Rogue is invulnerable, though not invincible, as a concentrated blast from Viper's gun requires her to absorb Wolverine's healing factor to stay alive (a moment that was adapted in the original X-Men film). 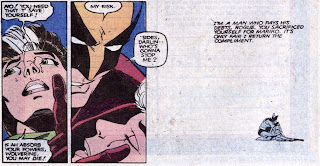 Rogue teases kissing Wolverine, something which he responds to about as well as you'd expect, and which seems slightly out-of-character for the later, "more angsty because she can't touch anyone" version of Rogue.

Later, Rogue takes a blast intended for Mariko to pay her back for being kind to Rogue in issue #172.

Upon seeing Madelyne for the first time, Lilandra straight up freaks and whips out a lightsaber before she's calmed down. 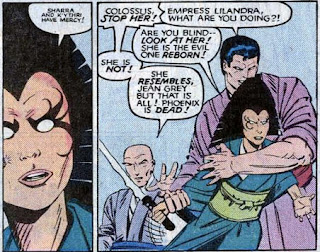 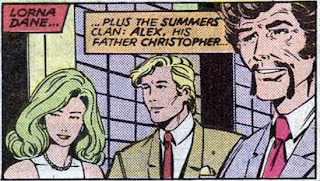 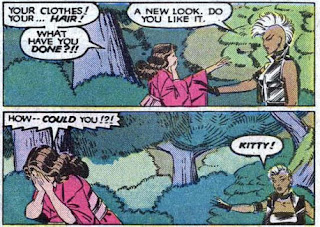 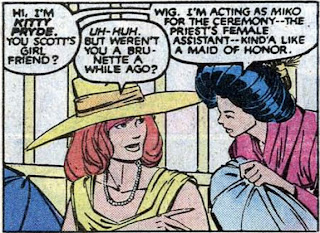 I Love the 80s
Though grounded in character development and not nearly as obvious or grating as, say, a mullet, it should be pointed out that Storm's new look is of its time.

Artistic Achievements
There's a great comedic bit where Madelyne, after agreeing to watch Lockheed for Kitty and learning he's a dragon, reacts to the strange surroundings she's found herself in. A great piece of illustration that cracks me up every time. 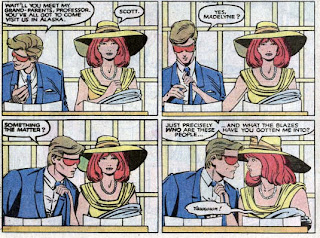 It's in the Mail
The letters in this issue are answered by Colossus.

There's a letter which points out how often Kitty has saved the X-Men since joining the team. 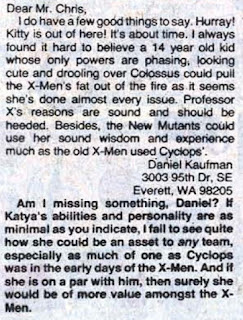 Responses to questions in other letters reveal that Professor Xavier's cloned body was cloned without a mind, so he didn't displace anything when his mind was transferred into that body, Banshee and his daughter are in Ireland getting to know each other, Stevie Hunter teaches physical conditioning for the X-Men as well as the New Mutants, and the X-Men no longer use Magneto's island base because they no longer need it, and because it's connection to Limbo is enough to keep Colossus, at least, away

Teebore's Take
In just nineteen pages, Claremont manages to deftly conclude the Wolverine/Silver Samurai conflict, introduce Madelyne Pryor to the X-Men, punctuate Storm's recent character transformation, and break Wolverine's heart, without anything feeling rushed or under-served. But the real standout of this issue, and the thing which immediately comes to mind whenever I think of it, is the brilliant four page sequence right in the middle, in which Paul Smith adopts Frank Miller's technique, from Wolverine's limited series, of depicting the action in a series of four rectangular panels. For four pages, we get the same panel grid repeated, and the result is a great example of how sequential art creates the sensation of movement. Each panel is, of course, a static image, yet each one so expertly suggests the next movement that our minds automatically fill in the action as we cross the panel border, until we reach the next "snapshot" in the following panel and it synches up with what we imagined. In terms of pure sequential storytelling, it's one of the best choreographed and constructed action sequences in X-Men history, and a personal favorite.

Next Issue
New Mutants #8 takes the New Mutants deep into the Amazon, and next week the X-Men head to the Texas State Fair in Uncanny X-Men at the State Fair of Dallas #1
Newer Post Older Post Home
Posted by Austin Gorton at 8:00 AM