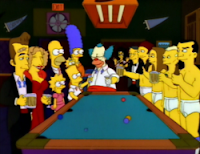 Or the One Where
Krusty's show gets, uh, cancelled. So Bart and Lisa assemble an all star list of celebrities to help launch his comeback.

The Setup
After a new children's performer, a ventriloquist dummy named Gabbo, takes Springfield by storm, Krusty's show gets taken off the air.

Notable Notes
According to the DVD commentary, the impetus for doing a star-studded episode like this was born of an attempt to emulate season three's "Homer at the Bat", but with celebrities instead of baseball players.

Elizabeth Taylor recorded her part in this episode the same day she performed Maggie's voice for "Lisa's First Word".

Bette Midler agreed to particpate in the episode on the condition that her anti-littering campaign was highlighted; hence the scene where she takes down Snake for littering on the highway.

Technically speaking, we learn that Luke Perry is Krusty's half-brother in this episode, though that little factoid never comes up again.

As of this episode, Bart and Lisa have now helped release Krusty from jail, reunite him with his estranged father, and resurrect his TV show.

Krusty: Thirty-five years in television and already nobody remembers me. Just like what's-his-face and whose-it, and you know that guy, always wore a shirt?

Bart: Hey, Red Hot Chili Peppers, do you want to appear on a Krusty comeback special?
Flea: Sure, if you can get us outta this gig.
Bart: No problemo. Hey Moe, look over there.
Moe: What? What am I looking at? I'm gonna stop looking here in a second. What, is *that* it?
Homer: Hey Moe, can I look too?
Moe: Sure, but it'll cost ya.
Homer: My wallet's in the car.
Moe: He is so stupid. And now, back to the wall...

Krusty: Now, boys, the network has a problem with some of your lyrics. Do you mind changing them for the show?
Anthony Kiedis: Forget you, clown.
Chad Smith: Yeah, our lyrics are like our children, man. No way.
Krusty: Well, okay, but here where it says, "What I got you gotta get and put it in ya," how about just, "What I'd like is I'd like to hug and kiss ya."
Flea: Wow. That's much better.
Arik Marshall: Everyone can enjoy that. 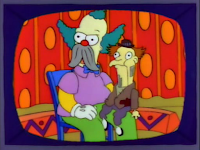 Teebore's Take
Season Four comes to a close on a slight down note. Which isn't too say this is a bad episode; there's plenty of strong material here, and the cavalcade of celebrity appearances is a testament to the show's success and cultural relevance at this point in its history (I mean, not many shows got to book Johnny Carson). But the episode never quite rises to the transcendental level of the some of the other all time classics of the season. It's an episode remembered first and foremost for its cast of guest stars, and then for being a great Simpsons episode. Which under most circumstances would still allow it to stand out, but coming at the close of one of the show's best seasons, following in the footsteps of some of its most well regarded and beloved episodes, it comes just shy of meeting those standards.

A great episode with an amazing number of well-served celebrity guest stars, it still falls just short of being an all time classic. 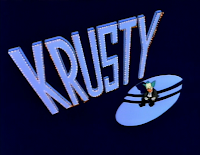