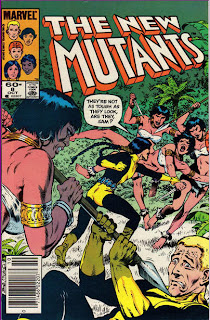 In a Nutshell
In the Amazon, the New Mutants meet a strange girl named Amara.

Plot
In the Amazon, the New Mutants play an improvised game of hide-n-seek to exercise their mutant powers. Later, they check in with Professor X, who advises them that Karma is still missing and that they should continue their trip. When Dani decides to swim back to their boat, one of the crewmen, Carlos, hoping to stir up some piranhas, empties a slop bucket into the river. Dani uses her power on the fish to scare them away, and Sam manages to pull her out of the water. They crash on the opposite shore and come face to face with a group of Native American women, who attack them. Realizing the Native Americans were watching the boat, Sam and Dani fight them off, but take one of them captive. That night, as the ship sails up the river, Roberto's mother Nina unsuccessfully tries to communicate with the captured girl. Meanwhile, in Rio De Janiero, Emmanuel Da Costa meets with Sebastian Shaw, and they discuss once again the difficulty of sabotaging Nina's expedition without hurting her or Roberto, but Emmanuel insists he will stop her from reaching the uncharted resources of the Maderia. 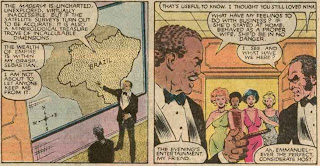 Back on the river, Nina and the New Mutants reach their destination, the Maderia mountain range. Rahne brings food to the captured girl, but discovers Carlos beating her for information. Rahne transforms into a wolf and scares him off, then learns the captive girl's name is Amara. But when Rahne returns to the deck for more food, she is knocked out by Carlos. Nina, the New Mutants and Amara awaken to discover they are alone on the boat as it heads towards a waterfall, its engines sabotaged. The boat crashes, and everyone scrambles to get to shore. Rahne manages to pull Amara from the river, but Amara emerges with white skin and blond hair. The New Mutants realize that Nina is missing, but before they can search for her, they are suddenly surrounded by a group of Roman legionnaires.

Firsts and Other Notables
The is the first appearance of Amara Aquilla, who will eventually join the team as Magma, though here we only meet her as Amara, a Caucasian girl disguised as and living amongst a tribe of South American Indians for reasons we have yet to learn.

After stepping down as regular penciler in favor of inking, this is Bob McLeod's final issue inking the series, taking him completely off the series he co-created. I believe his next project after this was inking Marvel's Star Wars comic.

The cover heads are back to normal, yet oddly, Karma is amongst them.

A Work in Progress
Rahne believes that wearing less clothes in deference to the jungle heat would be "na' proper". 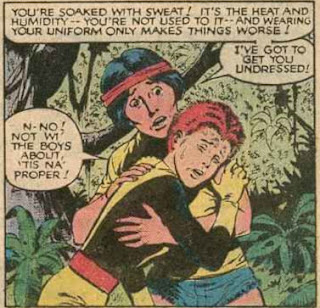 Dani has been practicing refining her power to choose either a good or bad image to recreate.

Team America is seen at the mansion, and Professor X mentions he is continuing their training. 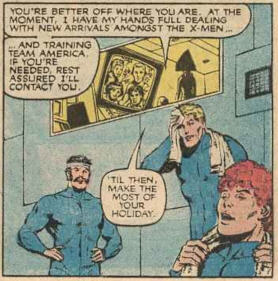 Dani tells Sam to help her out of the river by using "rescue maneuver 2", which is apparently...pulling her out of the water. Not sure that needed a specific designation.

Roberto's father and Sebastian Shaw again discuss Emmanuel joining the Inner Circle of the Hellfire Club and the need to prevent Nina Da Costa from reaching the Maderia. 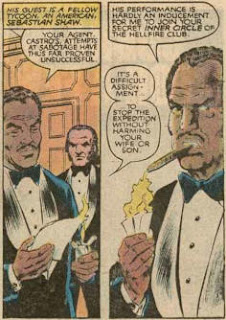 Reminded of her upbringing by the anti-mutant sentiment aboard the boat, Rahne delivers a monologue to Amara, believing she can't understand her, about how she thinks her life would be easier if she could just stay a wolf. 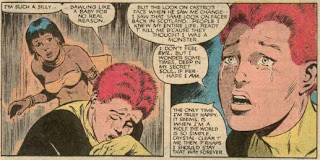 The idea that Roberto is super-strong but not invulnerable is reinforced. 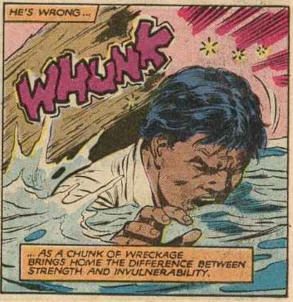 I Love the 80s
Behold the satellite phones of the 80s: 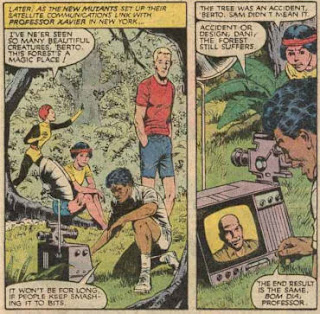 Dani strips down to her two piece swimsuit at one point. 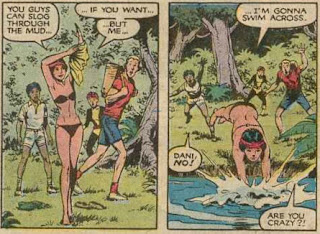 The New Mutants are in the Amazon, so of course Dani's swim leads to an encounter with piranhas, whipped into a frenzy by one of the crewmen working for Emmanuel Da Costa, though the popular depiction of piranhas as vicious predators able to devour humans has these days largely been debunked.

Emmanuel is pretty much a Bond villain in this issue, complete with a secret map hidden in a wall and ladies of the evening on standby.

The idea of the Caucasian Amara disguising herself as a dark skinned Native American via makeup and a wig is...dicey, at best. 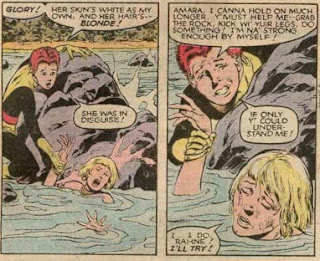 They're Students, Not Superheroes
The New Mutants continue their training while on the field trip, and must submit their training results to Professor X for evaluation.

Human/Mutant Relations
Much of the crew of Nina's boat is reluctant to continue the expedition when they learn there are mutants aboard.

Teebore's Take
The multi-part "Nova Roma" story kicks off in earnest, with the New Mutants journeying down the Amazon towards the Maderia, meeting the girl who will eventually be known as Magma for the first time. Claremont continues to do an effective job of both developing the characters, giving everyone a standout moment or two, as well as depicting the New Mutants actually improving in the use of their powers (Dani, not surprisingly, has come the farthest in that regard), something that was often missing even from the original school-age X-Men team. Yet, as with past issues, the end result seems perfunctory; competent and well-executed, but nothing to get too terribly excited about. Claremont isn't exactly phoning it in, but it's clear he's not yet devoting the same kind of energy and creativity to this title that he is to contemporaneous issues of X-Men.

Next Issue
We take a break from the norm, and look first at Uncanny X-Men at the State Fair of Dallas, followed by a New Mutants guest appearance in Marvel Team-Up Annual #6.
Newer Post Older Post Home
Posted by Austin Gorton at 9:00 AM