Well, I didn't get a chance to watch last Thursday's Glee, but here's what I did watch in a vacation-shortened week.

How I Met Your Mother: Farhampton 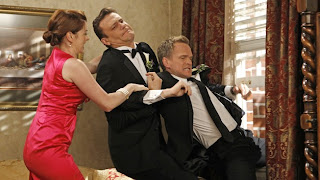 As most plot/mythology episodes tend to be, this episode was a little sparse on laughs, focusing instead on advancing both the Ted and the Robin/Barney romances and teasing out more hints of the mother. But for what should be/may be the show's final season premiere, that's all right. As someone who has long since given up on caring all that much about the identity of the mother and how the show's various clues to that end connect, caring instead about just watching these characters interact and make me laugh (making me, I guess, this show's version of the people who bugged me for watching Lost in a similar way), I can't deny feeling a certain excitement about knowing the show has reached its endgame. We don't know who the mother is, but we've seen her and Ted together at the place and time where they will meet, and the show still managed to make that feel like a big deal.

Other Thoughts
The comedic highlights: Marshall's excitement at being asked to be a bridesmaid, and the quick cut to Barney declaring "challenge accepted" after the idea of him seducing someone over the phone is floated

For those that haven't heard, while this season is supposedly the show's last, CBS is in negotiations with Carter and Bays, the show's creators, and the cast to return for a ninth season. In the meantime, Carter and Bays have approached this season as though it's the last, with a plan B in place should the show be renewed for another season. They've also said publicly that the show will only return if the entire cast decides to come back.

The turducken narrative in this episode is hilariously ridiculous: SagatTed is recounting to his kids the time he recalled to an old lady at the train station about reminding Robin about how he had to climb in and out of church windows to help Victoria run away from her wedding. That's just...wow...

I never really thought of it last season, when it was revealed that Ted meets the mother at Robin and Barney's wedding (or, as this episode suggests, on their wedding day/in the vicinity of their wedding), but that actually does a lot to validate the idea that Ted started his story with the details of how he met Robin. You can draw a (admittedly squiggley and sometimes circular) line from that moment to him meeting the mother as a result of Robin's wedding, and thus, from the show's first episode to this one (and, presumably, it's last).

Barney's 52 second recap of the show thus far was also a nice little "this is our last season" nod.

I will never not enjoy the mining of the German language for laughs (for the record, I have no idea if Thomas Lennon's words for a soul mate and the person who is almost your soul mate are made up or not (I've never encountered them), but their length and hyper-specificity, making literal translations difficult and long-winded, are very much in keeping with the language). 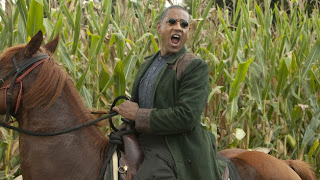 This episode didn't address all the concerns raised by the pilot, but it did offer a glimpse at how the show could work moving forward, giving the characters smaller objectives to overcome each week, building towards their main goal, while details of the world and larger plots simmer in the background. Charlie continues to be a frustrating character, but her transition in the course of this episode suggests there's hope for her. While going from "don't kill him" to "I'll kill him" could seem abrupt, the distinction between killing someone to make her life easier vs. killing someone to help other helps sell the transition, and is a strong hook on which to hang her character, allowing her to remain involved in the action as something more than an annoyance without turning her into a Miles-esque badass and also allowing her to remain heroically righteous.

Other Thoughts
I'd like to take credit for the reveal that Elizabeth Mitchell's character is still alive, but it was pretty obvious from the casting.

Giancarlo Esposito was fantastic once more, effortlessly slipping from one emotion to the next.

I was surprised to see Charlie split off from Step Mom Doctor and Google Guy so quickly, but apparently they're going to be our connection to the "Power Medallion" plot.

Putting aside the ongoing issues with scenes of playgrounds covered with overgrowth followed by scenes set in corn fields with nice even rows, there seems to be an almost yellow filter applied to the scenes set outside during the day, making everything seem unnaturally sunny. I'm not sure what that's about, but it's getting somewhat annoying.

Dr. Bitz commented that hauling that helicopter through the woods via chain gang probably wasn't the most effective method of transporting it; I reminded him that the Pharaohs managed to build the pyramids of Egypt with similar methods, so what does he know?

Remember to print out those digital pictures, folks! 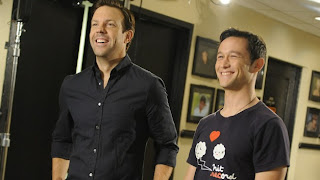 This was an amusing episode, in that it managed to reach a pretty consistent level of "amusing" with its sketches, with nothing really rising too far above or below that line. Joseph Gordon Levitt pretty much picked up right where he left off with his last hosting gig, bringing his manic energy and willingness to do anything to all his performances (and while I didn't particularly love anything he did in this episode, I would like to see if he could harness that energy in a old fashioned screwball comedy of some sort).  So while nothing here was fantastic, nothing was terrible either, and the end result was pleasant enough.

Favorite Sketch: A toss up between the second "Son of the Dos Equis Guy" sketch and the hypnotist sketch, simply because the line "he swam two laps and then puked, like a goat! They had to drain the pool!" and Taran Killam's naked and mating Tyrannosaurus Rex elicited the biggest laughs from me.
Least Favorite Sketch: Either The Finer Things, which had an amusing premise but little else beyond that, or the family singing about Joseph Gordon-Levitt in drag, which wasn't weird enough to work.

Other Thoughts
Jay Pharoah's stock continues to climb; he was in this episode a lot.

The political material in this episode was pretty good, both the "Undecided Voter" ad and the GOP tampons ad.

I was pleased to see how few recurring sketches there were, with the only one in this episode being the "four guys reminisce at a bar", a good-not-great recurring bit. Hopefully, in Kristen Wiig's absence, this is a trend the show will embrace this season.

Another strong Weekend Update, with Kate McKinnon's Ann Romney being a revelation and good enough to make up for the weak "old friends of the dictator-du-jour whisper things about him" routine, arguably the worst recurring Weekend Update bit now that Garth and Kat are dead.

Kelly Ripa: One time I shut my eyes for a second and accidentally slept for a year and a half. That’s why I stopped blinking!

Ann Romney: The Democrats get George Clooney; if you’re a Republican you get to shake Jon Voight’s cold lizard hand.