Welcome to the first "Last Week in TV" post of the 2012-2013 season! This is also the beginning of my slightly new approach to these posts. While I enjoy writing about TV every week and this series of posts remains popular amongst you guys, the readers, they are a lot of work. So in an effort to both keep myself from burning out (and thus abandoning the series entirely) and to afford me more time to work on other posts (and maybe even some fiction writing...), I'm going to approach these posts a little bit differently this season.

Instead of long-winded analyses of each episode, expect shorter, in some cases more Twitter-esque, thoughts, followed in some cases by particular lines which tickled my fancy (for comedies) or questions/musings about characters and/or the unfolding plot (for dramas). For Saturday Night Live, I'll no longer run down each sketch, but just comment on my favorite and least favorite sketches in addition to general thoughts on the episode.

Additionally, each season I will devote a standalone post to one show (kind of like my old Lost posts), a show which I feel deserves a longer review, either because I like it or am likely to have a lot to say about it. For now, I'm thinking Walking Dead in the fall/winter (assuming I find a way to watch the show, thanks to Dish Network's ongoing spat with AMC) and Game of Thrones in the spring.

My hope is that this approach will keep me invested in writing about these shows, while also preventing me from falling too far behind in coverage (and making it easier to catch back up when I do; case in point, I'll be out of town most of next week, so I'm holding this week's Glee for next week's post) without curtailing the fantastic discussions we have each week in the comments section (and by all means, if you want to discuss something about a show that I failed to mention, don't be afraid to bring it up; my hope is that our discussions will encompass much of what I fail to bring up myself).

Of course, this post is already going long, and what follows isn't a lot less long-winded than usual, so let's quit with the jibber-jabber and get down to it already. 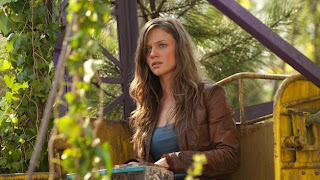 Definitely eye-rollingly over the top in places (the hunky militia boy with a soft spot for Charlie first and foremost), but the potential in both the premise and the characters is deep enough to keep me engaged for a while yet. As a main character, Charlie is pretty bland, in a Luke Skywalker kind of way, but there's potential there to see some edges, particularly now that she's paired up with her Han Solo-esque uncle (Billy Burke's drinking, sword-wielding badass is a pretty obvious pander to genre fans, but consider me succesfully pandered to! That sword fight sequence was pretty cool). As long as the show strikes the right balance between exploring its setting (how this new world works post-blackout) and its mythology (why the blackout happened and how to reverse it) while keeping some of the more over-the-top and cliche genre conventions in check, it should be entertaining to watch, even if some of the characters run bland.

Other Thoughts
I hope the show continues to periodically flashback to the immediate aftermath of the blackout; I find the details of how society reacted to that more intriguing than the details of how it functions fifteen years later.

I assume that Elizabeth Mitchell either isn't dead or will be featured heavily in flashbacks; I doubt they'd bring her in for two scenes in the pilot.

I get that Billy Burke was a soldier, and I appreciate what his character brings to the show, but did he learn to sword fight that well in the Marines?

Of the two "twists", I like the idea of General Monroe being Miles' old army buddy even though it wasn't all that shocking, and while the idea that the gizmo Google Guy is now carrying can turn power back on (and isn't just a fancy way to store a jump drive) is clearly meant to be the show's "OMG" moment, I was more surprised that the show revealed it by going back and rationalizing why that women handed Charlie's brother over to the militia.


The New Normal: Pilot
Like most Ryan Murphy shows (see also: Glee), the first episode of this new series (and I have yet to watch any of its subsequent episodes) is very scattered, with some moments that work and others that don't, adding up to a fractured whole. This happens on Glee a lot (where the individual moments that work are pretty much all that keeps me watching a show that, as a whole, largely doesn't), and I don't know if I have the patience or inclination to commit time to two such Ryan Murphy shows, but I'll probably give this a few more episodes to see how it comes together in the early goings.


Go On: There's No 'Ryan' in Team
Not the show's funniest episode, but one which illustrates that the show is getting a better handle on the ensemble and their relationship to Ryan (after giving Ryan's assistant some screen time last episode, this was the strongest John Cho outing yet, and the episode largely succeeded on the strength of his work). Go On continues to walk a tightrope between drama and comedy, and while I wonder how long it can keep that up, the potential in the ensemble (and Mathew Perry) are enough to keep me watching. 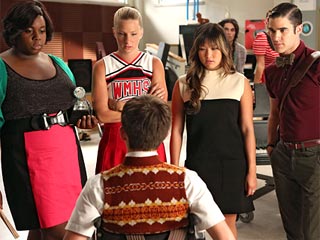 While the usual "Glee-sanity" was on display (they only added one new member? Don't they have like a twelve member requirement?), this was a surprisingly-measured episode, focusing for the most part on just two main stories (and bouncing them off each other nicely) with a couple minor plots hanging around the edges. For Glee, that's remarkably restrained. Perhaps the split focus will, in the long run, ironically help the show stay more focused.

The fact that Puck has a secret half brother who wants to be in the glee club is ridiculously soapy. It's also perfectly fitting for Glee.

Similarly, the cuts back and forth between old Rachel and new Rachel singing the same song were a bit on the nose, but that's Glee!

More subtly, I enjoyed having Puck 2.0 watch the glee club from afar in the same corner of the auditorium from which Puck 1.0 did in the pilot.

Nice to see that Sue still hasn't reverted to being a super-villain, and that the show doesn't feel compelled to catch-up with every alumnus every episode.

Anyone who's shocked to see Unique show up at McKinley, raise your hands. That's what I thought. The school district lines in and around Lima are apparently the most fluid, easy-to-traverse lines anywhere. These kids just come and go from school to school as the plot demands.

Favorite Song: None of the performances particularly wowed me in this episode, so I'll go with "New York State of Mind", which was at least my favorite song of those featured.

Sue: It used to be that just straight ex-football players would lurk the halls of high schools after graduation, but you’ve proven that gay show choir champs can also be depressive sad sacks desperately clinging to the past.

Brittany: That’s a great haircut Mercedes, I thought you graduated. 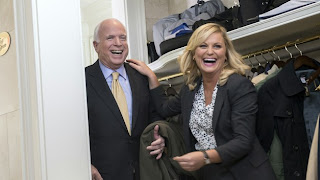 Parks and Recreation returns with a fantastic premiere, one which eschews the expected "here's the new status quo" in the wake of Leslie's election and Ben's departure for Washington, instead opting to tell a solid character-driven story on location in Washington D.C., humorously buoyed by Andy's ignorant takes on the various monuments. A strong return for a show that just keeps rolling along at an unbelievably-high level of quality.

Andy: That building looks like a boob.
Leslie: Well, it's not.
Andy: I know, it's the White House.
Leslie: No, it's the capital.

Andy: Have you ever seen any of the National Treasure movies? Everything in this city is a clue.

Leslie: ...so you can see that the color changes about a third of the way up, and it's when construction was actually halted...
Andy: Leslie, this is a really cool penis, but Ben and April are meeting us at the Smithsonian in ten minutes. 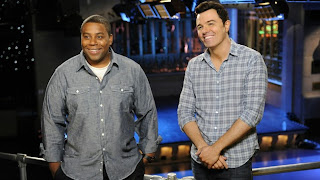 Anyone who reads this blog knows I'm a fan of MacFarlane's Family Guy and American Dad (especially the latter these days), and Ted was great, so I was excited when he was announced as the host of SNL's season premiere. He acquitted himself well, keeping the expected Family Guy voice cameos and old school crooner singing limited to the monologue, while able handling whatever the show asked him to do. I was pleased to see he popped up in a fair number of sketches (and even on "Weekend Update"). The episode on the whole was pleasant enough, with only one real stinker of a sketch, a couple of standouts, and plenty of amusing material in between. Nothing transcendent, but a solid start to the season.

Favorite Sketch: "Introduction to Puppetry". Well constructed and well acted, with layers of gags that had left me crying from laughter.
Least Favorite Sketch: Armisen as the producer of the sex talk show, one of my least favorite recurring sketches that didn't involve Kristen Wiig. Really surprised they led the night off with it.

Other Thoughts
Other strong sketches include the stuttering drill instructor, the oddly-brief Amish letters commercial ("Fat Snake with a Sex Penis"), and the Bain capital commercial.

Weekend Update was solid, with two great guests (MacFarlane's Ryan Lochte was probably his best work of the night, and the Mama/Honey Boo Boo material was strong as well) and one I hope we never see again (newcomer Cecily Strong's by-the-numbers Latina character).

I was very pleased to see Jay Pharoah take over as the show's resident Obama impersonator, for a number of reasons, though he's clearly still working out his take on the president. He's definitely got the vocal cadence down, but other than drawing out his pauses to exaggerated levels, there's not much else unique to his impersonation.

Obama: I do that to remind you that I have two adorable young daughters, and not five creepy adult sons.