Or the One Where
Bart and Lisa ghost write an episode of Itchy & Scratchy using Grampa's name, while Homer retakes a failed high school science class to earn his diploma.

The Setup
After watching a lackluster episode of Itchy & Scratchy, Bart and Lisa determine they could write a better episode, but are forced to submit it under Grampa's name to be taken seriously.

Notable Notes
This episode features a one minute short, "The Adventures of Ned Flanders" at the very end of the episode; it is completely unrelated to the events of the episode, and was added simply because the episode consistently came up short and the creators needed to fill time. It inspired the writers of the season seven episode "22 Short Films About Springfield".

Artie Ziff, Marge's one time high school boyfriend, makes a brief reappearance at Marge and Homer's high school reunion; however, Jon Lovitz was unavailable to reprise the role, so Dan Castellaneta performs the voice in this episode.

Not surprisingly, this episode is filled with tons of gags and in-jokes about TV writing and animation, including a parody of the post-credits sequence which followed most Stephen J. Cannell-produced shows. We also see more of the Itchy & Scratchy episodes than in any other episode, including end credits and the aforementioned post-credits sequence. 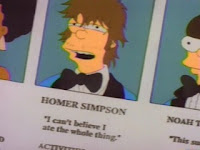 Lisa: Grampa, how'd you take off your underwear without taking off your pants?
Grampa: ...I don't know.

Roger: Hey how would you kids like a tour of the studio? Abe are you coming?
Abe: Any stairs?
Roger: Just one.
Abe: Nuts to you.

Lisa: Didn't you wonder why you were getting checks for doing nothing?
Grampa: I figured, 'cuz the Democrats were in power again. 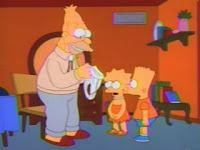 Teebore's Take
For whatever reason, I've never been a big fan of this episode. It's not bad, at all, and provides plenty of laughs on par with what we've come to expect from episodes of this vintage, but I've never considered it a classic on par with many of the other episodes from this season. Then again, I've never been a big Itchy & Scratchy fan (nor a fan of the shows that inspired it, like Tom & Jerry), and this episode is filled with I & S cartoons. There are lots of individual pieces to the episode I like, such as the writing and animation gags (as when Bart, Lisa and Roger Meyers Jr. are walking down a hall with repeated background animation as Meyers explains that cartoons reuse backgrounds to save money), the minor subplot involving Krusty using nictotine patches (culminating in his body being covered by the things), and the rock/paper/scissor gag quoted above, one of my all time favorite Simpsons quotes and something that I reference every single time rock/paper/scissors gets trotted out. But the parts never quite coalesce into a great episode, leaving the whole somewhat less than those parts.

Still a solid, funny episode on par with the rest of the season, just not an unquestionable classic. 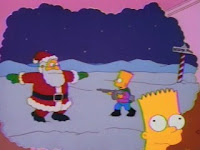