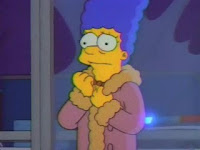 Or the One Where
Marge goes to jail for shoplifting from the Kwik-E-Mart.

The Setup
After the dreaded Osaka Flu comes to Springfield via orders of Juice Looseners and the Simpson family comes down with it, a beleaguered Marge accidentally walks out of the Kwik-E-Mart with a bottle of bourbon.

Favorite Quotes
Crowd: We need a cure! We need a cure!
Dr. Hibbert: Ho ho ho. Why, the only cure is bedrest. Anything I give you would be a placebo.
Woman: Where can we get these placebos?!?

Lionel Hutz: Now don't you worry, Mrs. Simpson, I- uh-oh. We've drawn Judge Snyder.
Marge: Is that bad?
Hutz: He's had it in for me ever since I kinda ran over his dog.
Marge: You did?
Hutz: Well, replace the word "kinda" with the word "repeatedly", and the word "dog" with "son".

Hutz: And so ladies and gentlemen of the jury. I rest my case.
Judge Snyder: Hmm. Mr Hutz. Do you realize you're not wearing any pants?
Hutz: I... Ahh! I move for a 'bad court thingy'.
Snyder: You mean a *mistrial?*
Hutz: Yeah! That's why you're the 'judge' and I'm the 'law talking guy?'
Snyder: The *lawyer?*
Hutz: Right.

Homer: Now, kids, while your mother's gone, I don't want to have to wash any dishes, so from now on, drink straight from the faucet or milk carton, and we'll eat while standing over the sink or toilet.
Bart: Who's gonna change Maggie?
Homer: We're going to let her roam free in the backyard and nature will take its course.

Marge: So how are things at home?
Bart: We flushed the gator down the toilet, but it got stuck halfway and now we have to feed it. 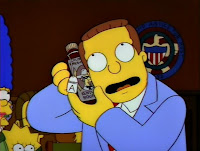 Teebore's Take
Another personal favorite, this episode features some of Lionel Hutz's best material (it's topped, in my opinion, only by his role in season five's "Marge on the Lam") and is arguably the best Marge-centric episode yet. It's also a curious example of how much of the zaniness The Simpsons is criticized for in recent seasons has been around for a long time, but was more acceptable/palatable back in the day. On the surface, the idea of Marge being arrested, tried and imprisoned for accidentally stealing a bottle of Bourbon (her arms full, she slips it into her coat pocket, then forgets its there), after which the Simpson's home falls into disarray without her in a matter of seconds, is just as whacky and unbelievable as some of the plot turns the show takes in later, less revered, seasons. Yet perhaps because these plot turns are the focus of the episode (rather than being offhandedly tossed out), or because of familiarity, or simply because everything in it is so funny, this episode is (quite rightly) held up as an all time great. 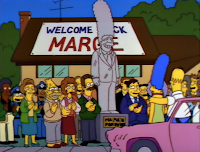