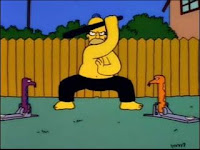 Or the One Where
Bart and Lisa team up to stop Whacking Day, a local holiday involving the beating of snakes.

The Setup
After Bart ruins an inspection by Superintendent Chalmers, he is expelled and Marge is forced to home-school him, inadvertently teaching him the knowledge he needs to help Lisa stop Whacking Day.

Barry White also guest stars as himself, and the version of "Can't Get Enough of Your Love, Babe" that he performs in this episode was an original recording done for the episode.

Favorite Quotes
Skinner: So, what's the word down at One School Board Plaza?
Chalmers: We're dropping the geography requirement. The children weren't testing well. It's proving to be an embarrassment.
Skinner: Very good. Back to the three R's.
Chalmers: Two R's, come October.

Marge: Bart, I'd like you to read this copy of Johnny Tremaine. It's a book I read as a girl.
Bart: A book!? Pfffft.
Marge: I think you might like this. It's about a boy who goes to war. His hand is deformed in an accident.
Bart: Deformed? Why didn't you say so! They should call this book Johnny Deformed!

Tour Guide: The enemy surrounded the fort, and said that if the captain was sent out, the rest would be spared.
Bart: What did they do?
Tour Guide: They sent him out!
Bart: Was he killed?
Tour Guide: And how! That's why they call it 'Fort Sensible'.

Lisa: Dad, for the last time, please don't lower yourself to the level of the mob.
Homer: Lisa, maybe if I'm part of that mob, I can help steer it in wise directions. Now where's my giant foam cowboy hat and airhorn?

Teebore's Take
This is another one of those episodes which attained almost mythic status in my eyes because I somehow managed to never get it recorded. Thus, I watched it a lot less than other episodes, and it always felt special whenever I did. It doesn't hurt that it's also a phenomenal episode, one which manages to skewer the educational system, politics and mob mentality while also presenting an impassioned argument for animal rights, all while being funny, and all within twenty-two minutes (there's a particularly great recurring sight gag in which Homer pulls into the garage every day, forgetting Marge is using it as a classroom and nearly runs into Bart; it cracks me up every time). This episode also furthers the development of Lisa's character, giving us the first indication of her strong stance on animal rights, foreshadowing her later decision to become a vegetarian, one of the few character/continuity changes to actually stick from episode-to-episode.

After a couple episodes that were a slight step down in quality, we're back to the out-and-out classics, with an episode that showcases everything The Simpsons does best. 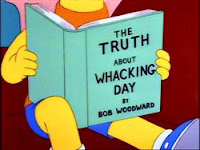