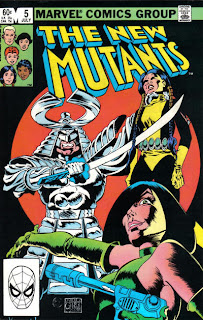 In a Nutshell
The New Mutants team-up with Team America to fight Viper and Silver Samurai. 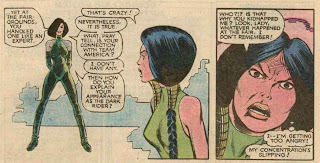 Back at the X-Mansion, Professor X uses Cerebro to determine how Dani was able to exhibit the motorcycle skills she displayed as the Dark Rider. In Washington, Viper and Silver Samurai approach Team America's leader and tell him that if Team America doesn't steal a specific object for them, they'll kill Dani. He gathers the rest of the team, and as they attempt to decide the best course of action, Professor X and the New Mutants arrive. Professor X explains that Team America are mutants, able to project their skills and abilities onto an individual and transform that person into the Dark Rider. Insisting that uncontrolled use of their power will only endanger more lives, he tells them he will train them. The New Mutants, frustrated that Professor X is more concerned with helping Team America than rescuing Dani, decide they will go after their friend, with or without Xavier's help.

Firsts and Other Notables
This issue guest stars Team America (later known as the Thunderiders), a group of expert motorcycle stuntman who have the ability to project all their collective skills and abilities onto an individual, causing that individual to appear as the Dark Rider/Marauder (no explanation is given for how that possessed person acquires a black motorcycle, jumpsuit and helmet), and Professor X declares in this issue that Team America are mutants. Based on a line of toys from Ideal Toys (which came up with the idea of Team America in order to re-brand their line of Evel Knievel toys), Team America actually starred in their own series, which lasted twelve issues. Yes, twelve issues. The final issue went on sale a couple months before this one. I have no idea why Claremont felt compelled to use them in New Mutants and reveal them to be mutants, nor if he was ordered to feature them by Jim Shooter.

Viper and Silver Samurai serve as the antagonists of the story, making them arguably the first super-villains the New Mutants have faced since Donald Pierce. Viper, one time leader of Hydra, is a long time Captain America villain, while Silver Samurai, who debuted in Daredevil and will eventually become a recurring nemesis and sometime-ally of Wolverine, has up to this point largely functioned in a partnership with Viper. Though it isn't made clear in this issue, he is a mutant with the ability to channel energy through his sword, giving it the ability to cut through most anything. 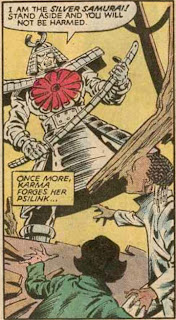 A Work in Progress
The issue opens with Professor X attempting to walk, but experiencing crippling pain which severs his mindlink with Stevie and the New Mutants. 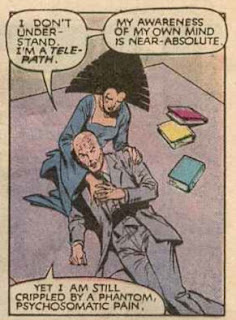 Roberto mentions that his father owns planes, including jets. He also says he's going to get Team America's autographs for his sister; I don't believe he has a sister. Whether this is something Claremont later brushes over or if the intention is that Roberto is making up a sister just to get the autographs, I do not know. 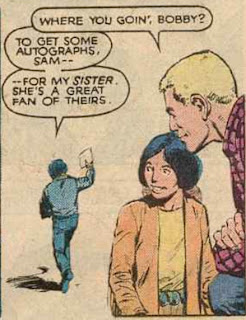 Shan worries about the New Mutants going into action out of uniform, concerned they may be recognized, despite the fact, as was discussed in the comments of last week's post, that their uniforms don't include masks anyway. 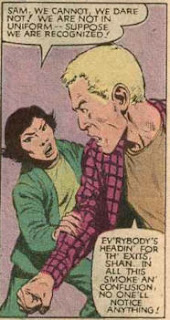 Viper and Silver Samurai use "teleportation rings" to get around.

Sam continues to be frustrated by the slow rate at which he's improving in the use of his power. 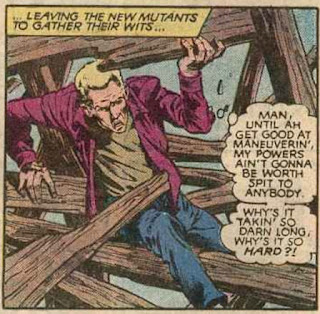 I Love the 80s
The entire concept of Team America, and the fact that they are even a thing, is very much of its time.

"Professor Xavier is a Jerk!"
The issue ends with the New Mutants pretty pissed off that Xavier cares more about helping Team America than rescuing Dani. 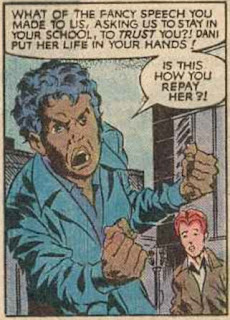 Young Love
During a flight at the carnival, a scared Dani throws her arms around Roberto, something he doesn't mind, though if this is meant to hint at a possible romance between them, nothing will come of it. 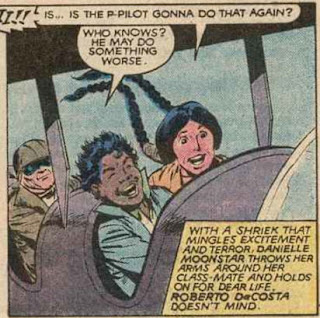 They're Students, Not Superheroes
The New Mutants get caught up in Viper's quest to capture the Dark Rider by sheer coincidence of being at the carnival when she attacks. Later, Professor X specifically says he intends to buy enough time to summon the X-Men to rescue Dani. 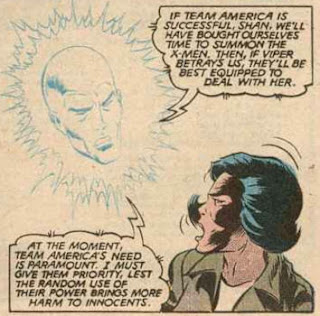 It's in the Mail
This issue features the first New Mutants letters page. Two separate letters suggest adding Banshee's daughter Siryn to the team, but this never happens.

Teebore's Take
So Team America. ...Yeah.... Even putting aside the fact that the idea of super-powered motorcyclists does little to engage me, Team America is one of those concepts wedded so tightly to a particular fad at a particular time that it's hard to take it seriously out of context (whereas a character like Iron Fist can rise above his origins as a fad cash-in, in part because his character evolved beyond the fad, but also because kung fu > motorcycle stunts). At this point in its run, New Mutants has been running largely stand-alone stories, so it isn't like the sudden interjection of these characters significantly derails any narrative momentum, but it's easy to share the sentiment of the New Mutants at issue's end that they're being usurped by Team America.

The most puzzling thing is, "why?" Had Claremont worked on Team America, I could see him using another title he was writing to wrap up loose ends from an aborted series (this is essentially what he did with Carol Danvers in X-Men), but as far as I know, Claremont had no involvement with that book or these characters prior to this issue. It just seems odd to hand over so many pages to seemingly random guest stars at a time when the title was still finding itself, especially when said guest stars are ridiculously lame (I mean come on: I love a good pun, but one of these characters' names is "R.U. Reddy". Seriously). While it's entertaining to see the New Mutants face off against some traditional super-villains (and doing so while still maintaining the pretense that they're not supposed to be superheroes), it's tough to get too excited about any of this.

Next Issue
The X-Men welcome a new member in Uncanny X-Men #171, while in New Mutants #6, Team America continues to wear out its welcome.
Newer Post Older Post Home
Posted by Austin Gorton at 8:00 AM