Last year, Teebore told me of a "make your own X-MEN roster" blog that was running somewhere. Rather than tracking freight at the logistics company we were both working at, we both made up our dream team. So this is my roster, not for power, or who would work best as a team, but the group of characters that I would enjoy writing the most.

MADROX – Multiple-Man. Multiple-MAN. Doing whatever a multiple can. Split personalities as well as bodies, truly torn apart mentally and physically. The way PETER DAVID has written him the past 10-15 years is brilliant! I’d carry on the tradition. 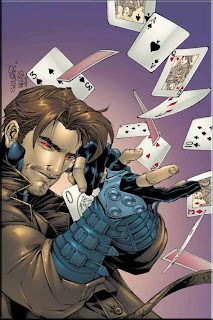 GAMBIT – Ragin’ Cajun. I wouldn’t write him like Claremont though – I’d actually learn more than 4 French words! His fighting ability rivals Logan’s and Remy knows it. He’s a competitor and a womanizer, with a heart of gold cliché. He’s Johnny Depp / Sean Connery / James Bond / Josh Hartnett / and Lorenzo Lamas all in one sweet piece of meat. He would be banging every chick in the MARVEL U. His thing with Rogue – boring! He’s moved on. He had the forbidden fruit, now he’s looking for more.

ICEMAN – The prankster. Madrox and Bobby would be BFF! The frat boys of the team.

KITTY PRYDE / LOCKHEED– The Brains of the team. I believe she is a certifiable genius who also raises the BOING index of the roster. Coupled with her flying, fire-breathing friend, Shadowcat can hold her own in any situation. She would also play the role of Deputy in training under the WHITE QUEEN. Oh, yeah. Gambit nailed her, and still does every once in a while. Friends with benefits.

PSYLOCKE – This is one seriously pissed off chick! She was British, and then they made her an Asian assassin! Don’t get in her way. Gambit wants her but she has no interest in the thief. Iceman might be more of her style, or maybe Madrox and his “many hands”.

WOLVERINE – He is THE X-MEN. Without him, the team wouldn’t exist as it does today. I would steer away from the “I’m a rebel without a past / 17 different past lives, who’s the best at what I do, BUB!” character and write him more along the lines of Hugh Jackman’s portrayal. He and GAMBIT would have the rivalry renewed from Uncanny 273 – X-MEN 12. Friction. He’d also be struggling with Little Kitty growing up to be a sophisticated woman. Wait until he finds out about her and Gambit’s arrangement!

WHITE QUEEN – The LEADER. She’ll keep the team together and act like a matriarch since Professor X will be long dead and decomposed (He’s TOOOOOO powerful and has nothing left to 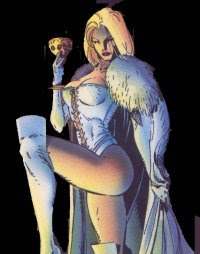 prove after leading the team for 40 years. Let’s move on, people!)

My stories would have nothing to do with aliens or “being outcasts” / feared by the public / homo metaphors. I’d concentrate on their rogue’s gallery and internal drama and let the characters advance the plot. Who cares about a cure for the mutant gene? You can phase through frickin walls! That’s awesome! This group knows that they have the power to save people’s lives and make the world a better place. The WHITE QUEEN doesn’t give a shit about XAVIER’S dream. Pussy SLIM Cyclops and Mohawk Ororo are the frickin liberals of the bunch. MY TEAM doesn’t give a flying eff about politics or conservatives or democrats. They are a team of common sense moderates who want to do what is right but also have somewhat of a sense of selfishness.

The only way I could accomplish this is in a WHAT IF? / ELSEWORLDS format.
Newer Post Older Post Home
Posted by boots~ at 6:30 PM