No, she doesn’t have a movie coming out anytime soon, but she is an important, often overlooked character.

Powers and Abilities: Super strength, flight, heightened invulnerability; Wonder Woman is also a highly trained martial artist in both hand-to-hand combat and historic weaponry, who can deflect bullets with her bracelets and use her tiara as some kind of crazy batarang-thing.

Or, as the splash page of her comic once said: "beautiful as Aphrodite, wise as Athena, swifter than Hermes, and stronger than Hercules." 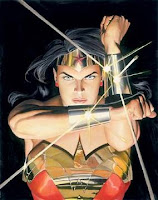 Weaknesses and Achilles’ Heels: Back in the day, being bound by a man robbed Diana of her powers.

Gadgets and Accessories: Lasso of Truth, a golden magic lasso that forces anyone in contact with it to tell the truth. She also flies an invisible plane, presumably for when she doesn’t feel like flying under her own power.

Friends and Allies: Steve Trevor (Lois Lane to her Clark Kent), Hippolyta (her mother, Queen of the Amazons), Etta Candy (her plump, candy-loving (get it?) Golden Age sidekick), Donna “My Character Is So Convuluted Even By Comic Book Standards That Teebore Doesn’t Know Which Name to Use” Troy (the first Wonder Girl, her Silver Age sidekick), Cassie “Wonder Girl” Sandsmark (her current sidekick); the Justice League 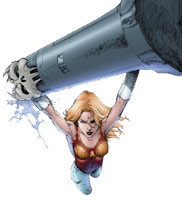 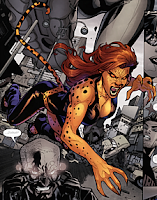 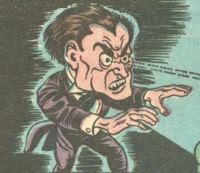 One-Sentence Origin: Born of clay and given life by the gods, Princess Diana won the mantle of Wonder Woman, and entered Patriarch’s World to defend it from harm and teach the Amazonian values of peace and justice.

Memorable Moment: In the late 60s Wonder Woman received a

powers and colorful costume to stay in Man’s World and become an Emma Peel-esque kung-fu character mentored by I-Ching. The depowering of the world’s most famous female superhero did not sit well with real world feminist icon Gloria Steinem, so she placed a traditionally-costumed Wonder Woman on the cover of the first issue of Ms. magazine and wrote an essay extolling the virtues of the traditional take on the character. Shortly thereafter Wonder Woman was back in her traditional garb, complete with superpowers.

Fun Fact: In the 1940s, Wonder Woman served alongside other heroes of the era in the Justice Society of America as…their secretary.

Yeah, it took a little while for her to become a feminist icon...

Teebore’s Take: Wonder Woman was created by William Moulton Marston (who also had a hand in the creation of the lie detector-hence her truth-compelling lasso) in a stated desire to use the educational powers of comic books to introduce a strong and forward-thinking (for the time) female feminist protagonist. Well, Marston also had some odd fetishes (hence the lasso) and unorthodox approaches to love (he and his wife lived with a third woman in a polygamous relationship, for example) which led to many early Wonder Woman stories involving her getting tied up or emphasizing how servitude to a “master” is alright, as long as the master is a good one. 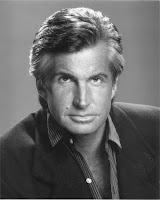 But Wonder Woman survived her odd creator, and is today considered a part of DCs “trinity,” one of their “big three” characters (alongside Superman and Batman). Considering that today she is nowhere near the sales juggernaut that Batman and Superman are (she currently headlines 1 comic book a month; combined, Batman and Superman star in approximately 1106 comic books a month) her role in this trinity largely stems from the fact that she survived the industry-wide super-hero purge of the 1950s making her, along with Bats and Superman, the only three characters to remain in constant publication throughout DC Comics’ history. What she lacks in thematic resonance compared to Batman and Superman she makes up for (a bit) with her strong connections to Greek mythology (at least for me this is a large part of the character’s appeal) established in George Perez’s post-Crisis reboot of the character. 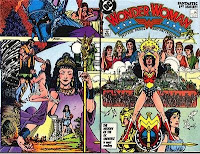 Wonder Woman also benefits from being a recognized icon of feminism outside the comic book community (as illustrated in the Gloria Steinem anecdote), the first and most successful female super hero. That role, as much as anything, will help keep her in print and alongside her male companions in the DC Trinity for years to come.

While Superman and Batman have had several successful film franchises, Wonder Woman has yet to get a feature off the ground (there’s been one in the works for years now). But she has had a fairly consistent showing on television, starring in all the incarnations of the Super Friends as well as the more recent Justice League cartoon. But most people probably know Wonder Woman thanks to the TV show from the 70s starring Lynda Carter (with Deborah Winger was Wonder Girl!).

I’ve never really seen it; it was a bit before my time, and I haven’t made a point to catch it as an adult. I have a feeling that without the same “nostalgia glasses” on that let me enjoy the hell out stuff like Transformers and He-Man nowadays, I’ll just see a dated “meh” show (unlike the Adam West Batman TV show, which is filled to the brim with batshit crazy awesomeness like this, no matter when you first discovered it).

Check out this site for more on the origin of Wonder Woman and zany bondage fun, and go here for a far more comprehensive look at Wonder Woman’s history.