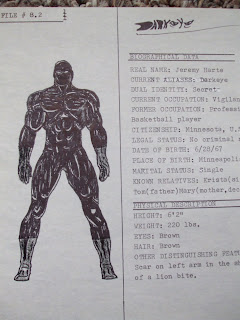 As stated before, I am a Comic Geek. Reading about Snake Eyes’ special missions and the soap opera that was the Uncanny X-Men filled my impressionable young mind with delusions of becoming a super hero myself.

I’d be Gambit or Hawkeye and kick royal ass. But then I’d also want to be myself, but not. In my teenage years I created the character that was me, but also a separate entity. One thing a writer quickly learns is characters soon take a life of their own, almost as if you were birthing a baby, containing parts of you but still vastly different.

This character is DARKEYE. 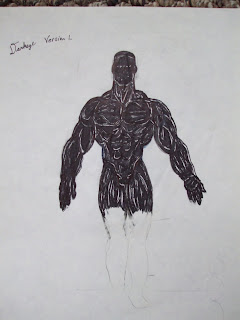 Is I’ve grown, Darkeye has always been a part of me. Every few years I’d jot down some notes on what would/is happening in Darkeye’s life.

What follows is the short version of my DARKEYE comic. The pictures attached were drawn by me sometime between the ages of 12-16. They’re not dated, so I can’t really be sure.
DARKEYE PITCH -

Damon Rose loves his city. There are two cities – one’s a “Saint”, the other an “apolis”. Damon lives in the former. Crime exists in this city but it’s not rampant. Damon wants to keep it that way.

Damon bartends at an upscale hotel in the heart of the city, crossing paths with other residents, tourists, politicians, professional athletes, foreigners – people of all races and creeds. Everyone has their story, especially after a couple cocktails.

Damon was raised as a Christian, however, he’s struggling with doubt. 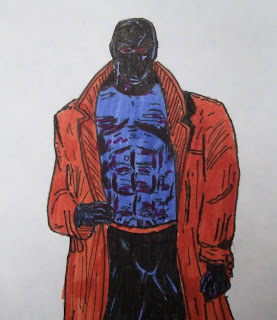 Damon loves sushi. He’s been going to the same family-owned Japanese restaurant since he was a teenager. The owner, an elderly man with an experience worn face and body, was being groomed to be a spiritual guide in his homeland. He moved to the states with his family prior to World War II and was sent to a relocation camp once Roosevelt signed the decree. After Damon’s father died, the restaurant owner became somewhat of a surrogate father to him, even taking him on trips back to Japan. The restaurant owner mentored him in several forms of martial arts and weaponry.

Damon wants to leave his mark. He grew up reading comic books and fantasizing of becoming a superhero. Soon he realized he could be whatever he wanted if he worked hard enough.

He creates a bullet proof mask with un-reflective ebony eyes. The mask contains all sorts of electronic gadgets such as a voice distorter, digital video enhancers, and links to police scanners and the Internet. 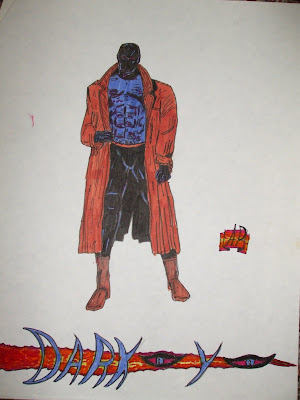 Damon decides he wants to make a different. Targeting drug dealers and rapists, Damon quickly terrifies the city’s underworld night after night. After slicing off a drug dealer’s hand, Damon is dubbed DARKEYE by the media from the dealer’s ranting of, “His eyes! Their depth . . . so dark!”

Darkeye quickly becomes sensationalized by the media, making Damon’s life extremely complicated as he must micro-manage his every move and decision in order to keep his identity a secret, and avoid detection while continuing to clean the streets of his city. 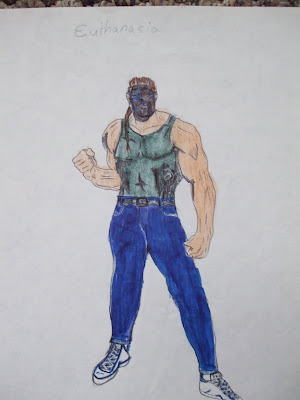 After a couple character development and mood setting issues, a traveling serial killer will be introduced – EUTHANASIA, self-proclaimed mercy killer of the weak. The weak, in his mind, being the mentally retarded, handicapped, and elderly.
DARKEYE will be a “Batman in the real world” series combined with mini-tales of the people Damon meets while tending bar. Bible passages and themes will be prevalent throughout the series. Many ambiguous topics such as faith, sexuality, ethics, and morality will be explored as Damon comes to term with his actions and their justification.
Newer Post Older Post Home
Posted by boots~ at 5:40 PM