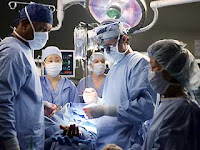 Okay, this was a weird episode, even by Lost’s standards. First of all, there was no island-based story, at all. Instead, the entire two hours was spent on the Oceanic Six who, for some reason, now all work at a hospital together in Seattle. I mean, sure, that makes sense for Jack, and Sun and Kate have certainly assisted in their fair share of island surgeries, and Sayid probably has some training in army field medicine, but I have to wonder what Hurley and Aaron’s medical qualifications are. Maybe Ben forged the necessary documentation for all of them, in order to get them into this hospital as part of his mysterious agenda.

Even stranger, the Oceanic Six have been recast. Jack is now played by that dude from Made of

Honor and Kate is played by a different doe-eyed, brown-haired actress. But she's still lusting after Jack, so that makes sense. Sayid is suddenly a homophobic black guy and Hurley is a thin Asian woman. Sun, for some reason, is played by that hot blond from 27 Dresses. I suppose the Lost "blond babe" quotient has been suffering for awhile, and now that Claire may be on her way out, the change makes some sense, I guess. Also, I'm thinking the time anomaly around the island must have affected the Oceanic Six on their way off the island, because bizarrely, while the other characters are relatively the same age, Aaron has somehow grown up to their relative age. Also, he’s a sassy black woman.

Oh, and it seems the producers were desperate for ad money or something because this whole episode sounded like a commercial for McDonalds. I don’t exactly know what a "McDreamy" is (some kind of new shake?) but it definitely sounds better than a "McSteamy…" 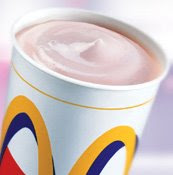 Seemingly ignorant of these drastic changes, the Oceanic Six proceeded to…what? That wasn’t the season finale of Lost?

It was the Grey's Anatomy finale?

Well, that makes a lot more sense, in retrospect.

Ah well, I guess the real season finale of Lost is this Thursday…