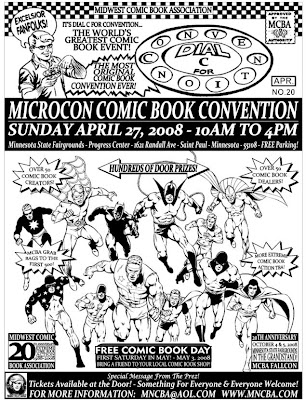 A few Sundays back I hit up Microcon, the smaller of two annual comic book conventions put on by the Midwest Comic Book Association. It’s nothing compared to the annual east and west coast affairs like Comic-Con International in San Diego (a geek Mecca for which one of my life’s goals is to make a pilgrimage to it), lacking the big name creators, panels packed with huge announcements and the multimedia draw of Hollywood studios and video game developers. Hell, Fallcon (the larger of the two local cons) lacks those things, and it’s still bigger than Microcon.

Really, Microcon isn’t much more than a big sales floor with a smattering of local and independent creators in attendance. But it’s growing. For the hour or so I was there it seemed more crowded than usual, and there were far more costumed attendees (a hallmark of the larger cons) than ever before.

There were four Ghostbusters, complete with Proton Packs and a decked out Ecto-1 car. There was a Darth Vader, an Imperial officer, a handful of Stormtroopers, a couple Jedi. I caught quartet of "Ladies of DC" decked out as Wonder Woman, Batgirl, Zatanna and Black Canary. And one kid in a Spider-Man costume that was way too form fitting.

Hands down though, the most dedicated costumer I saw was someone dressed like one of the “gonk” droids from Star Wars: 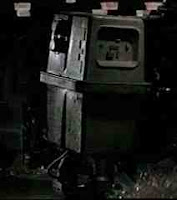 When I first saw it in the crowd, I assumed there were arm holes of some kind, or at least an opening for the person inside to look out. No so; whoever was inside that thing was committed; it looked exactly like that picture, and moved just like in the movie (with a slow, bobbing gait).

Let’s take a look at some of the swag I scored. After wandering the floor for a bit and seeing which dealers were offering what, the first thing I nabbed was a copy of Avengers 130.

Every con I go to I try to pick up at least one or two issues of the Avengers or X-Men that I’m missing. The trick (especially since I’m at the point where I have all but the increasingly older ones) is to get them at the right price. I’m not looking for Mint/Near Mint copies; just a readable copy that will hold together, something Very Good or Fine. Usually, I try not to drop more than ten bucks for one of these issues. But I’m going to have to adjust that limit soon, as I’ve reached point where it’s getting much harder to find even a readable copy of these older books for that price-for example, this is the only purchase towards my Avengers/X-Men hunt I made at this con, because I didn’t find anything else that met my criteria.

After that I went back to a guy that had graphic novels for 75% off. Most of it was stuff I already had or had no interest in, but I did nab a copy of Champions Classic vol. 2 for five bucks.

The Champions were a team cobbled together in the seventies, apparently because Marvel decided they wanted another team book. So they randomly threw together five characters to that end: Hercules, Black Widow, Angel and Iceman (this was during a period in which, believe it or not, the X-Men only had one book and it was just running reprints at the time) and Ghost Rider (the only character with his own book at the time, added to the roster, if I recall correctly, in an effort to bring readers of the Ghost Rider book to the Champions). The book only lasted seventeen issues, the latter half of which this volume collects. It also features some nifty early John Byrne art.

I also picked up a hardcover collection of the first six issues of the new Lone Ranger series from Dynamite.

I’d heard good things about it, and combined with my love of Westerns, made a note to check it out at some point. What better way to do so than a collection that, at $6.25, is cheaper than buying the single issues and is a hardcover to boot? That math is a good example of why cons rock.

Next I went to a dealer that’s always at the MCBA shows from which I often buy stuff. He always has his books marked down (today they were 70% off) but what separates him from a lot of the deep-discount dealers is that he keeps his marked down stuff in some semblance of order. I enjoy the thrill of the hunt, flipping through quarter bins and bargain boxes as much as the next guy, but when I have limited time, it’s nice to be able to shop with more precision.

In honor of Iron Man’s then-upcoming movie, I decided to see if I could fill any holes in my Iron Man collection. For nine bucks I nabbed issues 138 through 140 and 145 through 147 and Annual 6, giving me a continuous run of issues from 137 through 298.

These issues are towards the end of the David Micheline/Bob Layton run, one of the most acclaimed Iron Man runs. Good stuff.

With my time running out, I swung back around to a dealer selling trades at 30% off, or 40% off if purchasing three or more. In addition to other books, he had a healthy selection Marvel “Essentials” and DC “Showcase Presents” volumes, which I’m always on the lookout for at a good price.

I debated picking any of these up, since I can get always get them at that price through work, but, well, I don’t always have the extra money to get them any old time at work, and I wasn’t finding anything else at the con that was leaping out at me, so I picked up three at 40% off (the dealer nicely rounded it down to an even $30, something else that makes con rock): Showcase Presents Superman Family (vol. 2), Showcase Presents Robin the Boy Wonder and the Essential Dazzler.

Superman Family is the second volume collecting the wacky hijinks of Superman’s pal Jimmy Olsen, as well as a dozen or so issues of Lois Lane’s title, including the issue in which she gets blasted by a “growth beam” and becomes “fat,” all the while worrying that Superman won’t love her anymore (let’s just say she’s right to be worried). Robin the Boy Wonder collects some of his earlier Silver Age appearances as well as the backup features in which he starred from Batman and Detective Comics. And the Dazzler (nee the Disco Dazzler) book collects her first appearances as well as the first twenty-one issues of her solo series (of which the first few, I was surprised to find, contained some art by my personal favorite, John Romita Jr.) including the memorable issues in which she had to put superheroing before her music career (oh, wait, that was most issues…), as well as the times she faced off against Dr. Doom and, of all people, Galactus.

Finally, on the way out the door I dropped my last three bucks (retained thanks to the aforementioned rounding down of the graphic novels) to pick up Captain America 33 from a dealer selling recent books at cover price. I missed the issue when it came out a few months ago, vainly waiting for its arrival at Barnes at Noble until by the time I gave up (when the next issue appeared instead) my local comic shop was sold out.

And that was my hour or so at Microcon 2008. All in all, I found some great deals and was pretty pleased with my purchases (even if I didn’t manage to find another missing X-Men issue for the right price) and it was nice to see the con busy and growing. Now the wait sets in for Fallcon...