In honor of ol' Shellhead's big screen debut this weekend, here's everything you need to know about the Golden Avenger.

Nicknames and Aliases: Shellhead, Iron Avenger, the Cool Exec with a Heart of Steel

Powers and Abilities: Tony Stark is a mechanical and engineering genius, and a wealthy industrialist, able to create and upgrade fantastic technologies, including his ever-evolving Iron Man armor. He’s also been trained in hand-to-hand combat by Captain America, and of late, taken to calling himself a “futurist” with the ability to scientifically predict future events. It’s unclear if this is a super power or not, and is mainly used as validation for some of his more recent dick-ish actions.

Stark recently injected his nervous system with a techno-organic virus called Extremis that allows him to “store” the inner layers of his armor in the hollows of his bones and mentally control it. He can also control the other elements of his armor through “technopathy” allowing him to suit up at will. Extremis has also increased his body’s ability to heal and given him the ability to remotely connect to satellites, cell phones and computers worldwide. 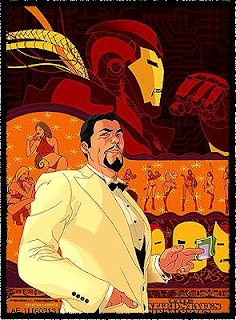 Weaknesses and Achilles’ Heels: During his early appearances, the chest plate of the Iron Man armor prevented a piece of shrapnel from piercing Tony’s heart; as a result, he had to wear it at all times and worry about it losing power. Eventually, he had a successful surgery to remove it. Afterwards he suffered from various debilitating diseases and handicaps that he eventually overcame (shot in the spine, paralyzed, presumed dead, debilitating nervous disease, Republicanism). Also he’s an alcoholic. And kind of a dick.

Gadgets and Accessories: The Iron Man armor is one big gadget, complete with his offensive repulsor rays, uni-beam, flight capabilities, energy shields, EMP generators, and all kinds of other gizmos and abilities. Once upon a time, Tony carried the (presumably lightweight but still tough) armor in a briefcase for easy access. He has also developed numerous “special purpose” armors over the years, including ones designed for use in deep space or deep waters, stealth, a heavy duty “Hulkbuster” armor designed for combat with the Hulk and another “Thorbuster” armor for facing off against Thor. 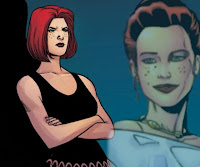 Friends and Allies: Harold “Happy” Hogan (his driver/best friend, who’s dead now I think) Virginia “Pepper” Potts (his former secretary and love interest), Jim Rhodes (aka War Machine, his friend, former pilot and occasional substitute Iron Man), the Avengers, S.H.I.E.L.D, and the many, many attractive ladies he’s bedded through the years, too many to name here. 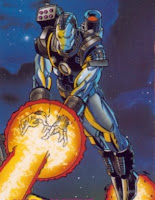 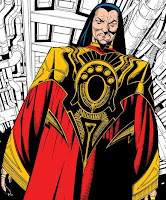 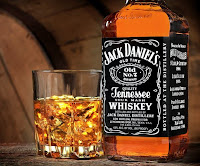 One-Sentence Origin: After being fatally wounded while testing weapons in a warzone and captured, Tony Stark used his mechanical genius to create a suit of armor to stay alive and break free, thereafter deciding to use his constantly-upgraded armor to defend the world from evil as Iron Man.

Memorable Moment: Iron Man 128 (November 1979) in which the extent of Tony Stark’s alcoholism is made clear. 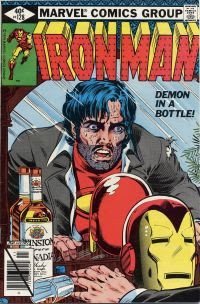 Fun Fact: Iron Man's armor isn't made out of much iron, rather it is composed of various complicated steel and titanium alloys, making his name something of a misnomer. 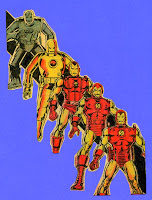 Teebore’s Take: Iron Man always seemed an odd fit at Marvel in the sixties, lacking much of the pathos and grounded-reality of many of the other characters: down-on-his-luck Peter Parker, the persecuted Hulk, Ben Grimm trapped in the form of the monstrous Thing. On the surface, Tony Stark had more in common with DC’s Superman, the character you wanted to be (in Iron Man’s case, a handsome millionaire playboy with access to the coolest toys and tons of babes) instead of the character you related to, like Spider-Man.

The damaged heart and the need to wear/power the chest plate was obviously Stan Lee’s attempt to ground the otherwise happy-go-lucky, wealthy industrialist. It’s also interesting to note that Iron Man origin/motivation isn’t born of personal tragedy. His Uncle Ben didn’t die as result of his actions. Rather, he saw firsthand the effects of the weapons he manufactured, and after being injured by one, designed an even greater weapon to good instead of harm. Even then (these stories taking place at the height of the Cold War) it took some time before Stark International stopped being a munitions company and transitioned to the production of more beneficial technologies.

After the heart injury became too difficult/ludicrous to continue, the new weakness that grounded the character became his alcoholism, and to a larger extent, the issue of an addictive, controlling personality. Even prior to his recent actions in the Marvel Civil War (in which Iron Man sided with the government on the issue of registering all super humans and led the charge against Captain America’s rebels) Iron Man has always been an “ends justify the means kind of guy,” often skirting the line between hero and villain along the way, and coming into conflict with less morally relativistic characters like Captain America, citing a “big picture” view of things to rationalize his actions. 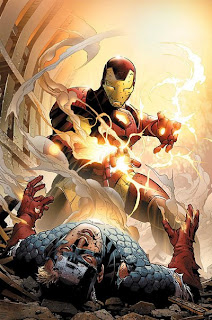 It’s likely that much of the appeal of the character comes from this more complex “gray area” approach to heroism; I particularly enjoy it when Iron Man comes into conflict with someone I more readily agree with, like Captain America. This is also probably why Iron Man continues to draw fans and readers, even though many consider his recent actions as the director of international peacekeeping/espionage force S.H.I.E.L.D and the head of the government’s post-registration 50 State Initiative to be at worst, outright villainy and at best, him being a dick. 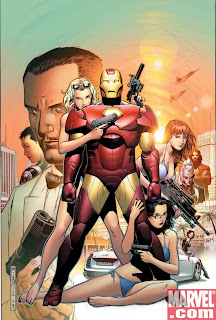 Also, he wears a high tech suit of armor that flies and shoots ray beams at stuff, and that’s pretty cool. 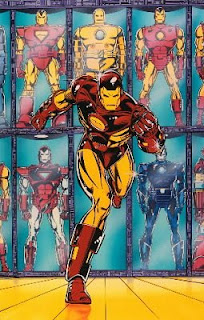