I went to see the Iron Man movie the other day and I enjoyed it more than I thought I would. It was not without its faults but it was entertaining enough with Robert Downey Jr. playing the boozing philanderer, Tony Stark. (Yes, it was a stretch for him.)
Actually, it's a testament to how much fun Robert Downey Jr. is as Tony Stark when you realize that there was only 3 real actions scenes throughout the entire movie but it still managed to be entertaining.
If you wait till the end of the credits of Iron Man you get to see a super-duper secret scene in which you find out that Mace Windu didn't actually die when Anakin bitch slapped him, he simply 'fell into the Marvel Universe.' This scene also foreshadows things to come regarding Marvel Studios and upcoming movies. For more information you can see Marvel's completely unbiased article here: http://www.marvel.com/news/moviestories.3493

To paraphrase the article, this is what the future of Marvel Superhero movies looks like:

That's right, along with the upcoming Incredible Hulk movie, Iron Man's getting a second movie and then there's a Thor movie and a Captain America movie planned. After all that, all four heroes will star in an assemble piece as the Avengers. That's what I call ambition. I'm of two minds regarding this aggressive plan and, luckily for you, I'm going to share both sides of my mind with you.

Why I like this:
This just in, Hollywood likes to belch out cookie cutter films that we've seen a hundred times before. Why? Because if one movie makes money, we have to make a hundred more like it, because they are sure to all make money too, right? Trying something unique and different is rarely attempted because the chance for failure is high and so much money is invested in any one movie. So instead of something new we see Mathew McConaughey and Kate Hudson in a romantic comedy together...again.
So I like the idea of making four individual movies featuring different heroes with a larger goal in mind of bringing them together for giant blockbuster. That takes moxy, cajones, guts, and, well, you get the idea.
We just rarely get to see Hollywood take chances. They did with Lord of the Rings. The idea that a studio would dedicate many years and spend a bucket load of money up front to make a trilogy of fantasy movies is unheard of. Generally, a studio tests the waters with the first movie of a trilogy and then make the other two if the first one is successful. So to make all three movies before releasing the first Lord of the Rings movie was a big risk, but it paid off big time. This Avengers idea could pay off big dividends too.
But nevermind all that ambition stuff, the bottom line is I like comics and superheroes. The idea of an Avengers movie starring characters that already have their own solo movies simply sounds bitchin' to me.

Why I'm nervous it will fail:
For all the ambition this type of project shows, if I was the CEO of a movie studio I'd have a hard time green lighting this project. It's not a question of whether I like the idea on paper, but more the logistics of it all.
First of all, this isn't like, say, the Harry Potter movies. Sure, there's going to be eight Harry Potter movies all presumably with the same actors, but those are movies filmed consecutively. Also, the source material has already been laid out in book form and one movie will logically follow the next.
Contrast that with the Avengers plan. When looking at the time table of the movies, you can see many will be filmed simultaneously. Each movie will have a different writer and a different director. Each super hero may end up with their own thematic elements, style, and feel to their movie. The idea that you could mash up those isolated films and characters into one movie at the end just doesn't seem doable. It feels destined to be incoherent and pretty much a cluster f.
Also, we already know there are two 'big name stars' involved with these heroes. You've got Edward Norton and Robert Downey Jr. Who knows who Thor and Captain America will end up being, but if they're comparable to the first two, then that's four big name actors you'll need to share screen time on a single movie. That's not counting Samuel L. Jackson. Can that many egos coexist on the same set? Will this truly be an 'ensemble' cast or will it be 'Robert Downey Jr. and those other guys' or something like that? This is not mentioning how costars like Gwyneth Paltrow and Liv Tyler will fit into all this.
Marvel tried an ensemble series of movies before with the X-Men trilogy. While financially successful, the third movie did have Cyclops dying in the first 15 minutes because Halle Berry wanted more screen time. Now, it's a proven fact that nobody misses Cyclops, but I have a feeling if you do the same thing with Iron Man or Hulk there will be many upset movie-goers.

The Marvel plan of making an Avengers movie and structuring contracts properly to allow for it to happen is no small gamble. Despite my reservations, though, I really do hope it works out. It could pay great dividends and end up being very entertaining to watch. Even if it fails, I applaud Marvel attempting something different. If more movie studios tried ambitious projects like this the landscape of cinema would be much more entertaining. 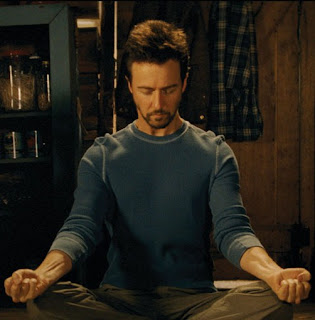 If Robert Downey Jr. gets more screen time than me then I'll get angry. You won't like me when I'm angry!
Newer Post Older Post Home
Posted by Dr. Bitz at 10:52 PM