Lost 4x12: There's No Place Like Home Part One

Not a whole lot to say about this one; it’s obvious a “part one” of something bigger, and as such, exists primarily to move various characters into position for the upcoming endgame. Most of the island narrative worked to that end, setting up the imminent conflict to come

The flash forward this week brought closer to “island present”

than we’ve ever been, opening with the Oceanic Six about to land in Hawaii and meet their families for the first time since being “rescued.” The subsequent press conference laid out once and for all most details surrounding their cover story. It was confirmed that the world believes Aaron to be Kate’s biological son and that Jin died in the crash. Subsequent events showed Hurley unsurprisingly the first to become unhinged by his post-island life, as well as the funeral for Christian and Jack subsequently learning the truth about Claire and Aaron. I’m curious to see to what this flash forward is building, since it seems that by the end of this episode, the island events will have met up with the beginning of this flash forward.

Speaking of the Oceanic Six coming together, every time I think the Oceanic Six are getting moved into a position in which they can be “rescued” together, they still end up more scattered. Now we’ve got Jack going after Hurley with Sawyer while Kate and

Sayid are rounded up by Richard and the Others, and Sun’s already on the freighter with Aaron, but she’s there with Desmond, Michael, a handful of Red Shirts and a mess of C4. Something tells me the freighter is not long for the world, and that the Oceanic Six will somehow end up using some combination of the Zodiac and the helicopter to mimic Michael’s path, the details of which he helpfully supplied to Sun, to the island from which the Coast Guard rescued them according to the “official story.” What this bodes for the extras, Desmond, Michael, the “good” Freighties…well, I guess we’ll find out next week.

This episode also had a lot of people asking and responding to some meta-textual questions. At the press conference, in which the reporter asked about Hurley’s girth (something many fans stupidly asked during season one) as well one who seemed suspicious regarding the circumstances of Kate’s “pregnancy,” which was something many fans wondered about (whether or not anyone was suspicious during her trial). We also got a couple of handy info dumps (the official Oceanic Six story and the fairly anticlimactic details of Michael and Walt’s journey to New York) and some fourth-wal lbreaking comments: Sawyer referred to the Dharma barracks as “New Otherton” (a term thrown around by the crew and fans but never used on the show before) and Decker commented on the Oceanic Six moniker being media-derived and not entirely accurate (obviously a nod to we technically-minded fans who feel

Aaron shouldn’t count as one of the six). We also had two instances of characters pointing out the ridiculous coincidences surrounding the main characters: Hurley’s dad and the numbers appearing on the speedometer (it’s been a while since we had a good old fashioned freaky appearance of the numbers like that) and Claire’s surprisingly recovered mom and her sad amazement at the coincidence that Claire and Jack were both on Oceanic 815.

Highlight:
Sun totally laying the smack down on her father, buying out the company from under him; welcome to the 00s, jerk-ass!

Did you Notice:
Oh yeah, Jack has a mom. What with all his whining about his dad, it was easy to forget his mom was still alive and relatively normal.

The gal that played Decker (the woman leading the press conference and working directly with the Oceanic Six) was Michelle Forbes, who played Ensign Ro on Star Trek: The Next Generation many years ago. 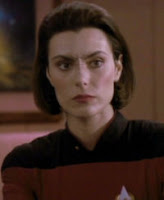 Juliet wasn’t aware of the Orchid, so it’s probably a station of which not all the Others are aware.

Decker says the Oceanic Six were found on day 103, and I believe currently we are right around day 100 (Lostepedia tells me its day 97) which makes sense, considering to what this finale is building.

Jesus Christ is not a weapon.

Questions:
Sun said two people were responsible for Jin’s death, and Paik is one of them; who’s the other one? Is she just exercising a little self-pity there?

Why were there 15 year old crackers in Ben’s signal kit? And who was he signaling? We’re led to believe it was Richard and the other Others, but Ben was evading Locke’s question. Was that just Ben being Ben?

Who came up with the Oceanic Six’s cover story? Jack and Co., Oceanic, Ben?

How does Daniel know about the Secondary Protocol (or, for that matter, how does he know about the Orchid? Was that something else he learned from a time traveler)?

How much money did Oceanic give the Six, exactly? It had to be a lot, in order for Sun to purchase a controlling interest in the company.

Didn’t Hurley come to terms with his “curse” when he and Charlie rolled the VW bus down the hill in season three’s “Tricia Tanaka Is Dead?” Why does he still want nothing to do with his lottery money? Does something happen in the finale to shake his newfound perspective, or is he simply reverting to type after being rescued? Or did the writers just drop the ball regarding this bit of characterization?

Who rigged the explosives on the freighter? I presume Keamy did, and that thing on his arm is some kind of dead man’s switch to give him leverage.

For whom does Decker work? She was w/the Oceanic Six abroad the Coast Guard plane, but I doubt she was a member. It was implied, but never made clear that she worked for Oceanic itself.

Next week:
A special two-McHour Grey’s McAnatomy McFinale. My guess is some attractive doctors will worry more about their own personal problems than all the people sick and dying around them.

In Two Weeks:
The two hour conclusion of the senses-shattering season finale! Worlds will live! Worlds will die! And nothing will ever be the same! And Jack probably won't like it!