Lost 4x10: Something Nice Back Home

So last week Dr. Bitz and I were discussing this episode before it aired, and we joked that knowing how stubborn Jack is, it was more than likely that his surgery would involve him performing the operation himself while Kate held a mirror so he could see what he was doing, despite the fact that Juliet, while not a surgeon, was a MD. Well, he wasn’t holding the scalpel, but beyond that, Jack pretty much was running his own surgery, complete with Kate-mirror, until Bernard forcibly knocked him out.

This episode raised the question of why some people get sick (Jack, Ben needing spinal surgery,

pregnant women dying) on the island while others heal (Rose, Locke, Jin (in a manner of speaking)). The producers had said they were going to bring up this question at some point this season. Dr. Bitz totally called it; in that “bring up” meant have a character mention it, not actually providing some info as to why that is. Still, it’s always nice to see Rose... 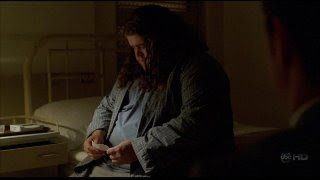 But in an episode more about character than last week’s high-octane plot focused episode, Jack’s appendicitis was pretty much just a vehicle to further examine his type A, “gotta be the hero” character. We see that even while suffering Jack has to be the hero, and Jack has to be in control, to the point of endangering his own life. And in the future, in which Jack has everything he’s wanted since arriving on the island the “heaven” he uses to counter Hurley’s assertion they’re in hell(he’s off the island, he “rescued” Kate, they’re together, he’s acting the part of the good dad) he still isn’t happy. Like his fellow doctor said, engagements are supposed to lessen stress (hah!). Of course, the only reason it seems he proposed was as a response to Hurley’s proclamation that Jack can’t raise Aaron. His discovery of and reaction to Kate’s “infidelity” were very reminiscent of how his first marriage fell apart, to the point where I almost expected Kate to admit to being in contact with Christian.

Christian himself looms large over this episode, haunting both his children; off the island, representing to Jack the unease he feels even in his seemingly-perfect life and on the island, perhaps serving as the instrument that ultimately separates Claire from her child. It seems even more likely now that Beardo-Jack is haunted by Christian, the same way Hurley is being haunted by Charlie. Perhaps, by the time Jack is fully hirsute, popping pills and bleating to Kate that they need to go back, Jack has realized that the “home” of this episode’s title refers not to LA but to the island. 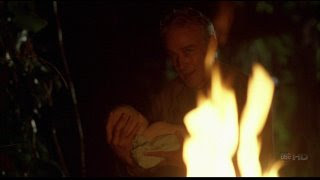 Highlight:
Jin catching on to the fact that Charlotte knew Korean, and subsequently putting the lessons he learned as Paik’s enforcer to good use.

Did you Notice:
The second time Jack saw his dad was after removing the battery from a beeping smoke alarm. Methinks this was a clue that the Christian he saw was a manifestation of the smoke monster (or that the producers are deliberately misleading us to think so).

Miles (who can seemingly communicate with the dead) witnessed Christian’s interaction with Claire. He was also showing enough interest in Claire and/or Aaron to get a Sawyer-issued restraining order slapped on him. Something tells me his interest in either wasn’t as lewd as Sawyer feared.

When Claire is walking through the jungle with Miles and Sawyer, she says “At least I’m not seeing things anymore.” I believe this is a reference to something I heard about a scene that was cut from last week’s episode in which Claire had some kind of vision in the wake of the house she was in exploding. Not sure if that’s going to develop into something more (probably, since the line made it into this episode). Perhaps she’s now having Desmond-esque visions?

Both Jack and Kate refer to Aaron as “the” baby (not “my” baby, a term of affection that parents will use no matter what age the child is) despite the fact that he walks and is freakin’ huge. Sorry, it just really bugs me. 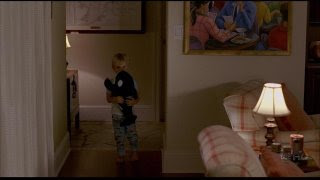 They say in comic books (and soap operas) there’s no death without a body; well, we saw Rousseau’s body. Unless the island is literally resurrecting the dead, I think she’s a goner (doesn’t mean we can’t see her in a flashback or as a manifestation of Smokey, though, right? Right?).

Jack was reading to Aaron from Alice in Wonderland; the first time Jack saw his dead father roaming about the island was in the first season episode “White Rabbit.”

When Jack saw Christian he was wearing the same suit and white tennis shoes he wore in “White Rabbit” and in Jacob’s cabin at the beginning of this season. 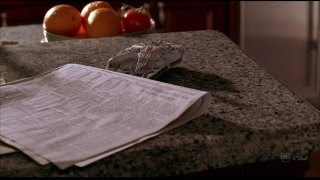 The warning Hurley passed on to Jack once again recalled the psychic’s words to Claire from “Raised by Another”; it seems we are being reminded that the issue of who raises Aaron is an important one, even if it’s still unclear as to why it’s so important.

Had to look this one up for the answer (because I couldn’t remember) but Bernard was a dentist, which explains why he was helping Juliet with the surgery (specifically, handling the anesthesia, something he probably had direct experience handling as a dentist). He was, of course, on the other side of the island when Sun assisted Jack on Boone’s unsuccessful surgery in season one.
Questions:
Well, they brought it up: why do some people get sick on the island while others are healed?

What did Sawyer ask Kate to do? What business “back home” does he have now that his quest is over? Was it related to his daughter? And why did he stay behind?

In the flash forward, does Jack know Aaron is his nephew? The way he shouted to Kate that she wasn’t even related to him suggested to me that he did, but it could go either way.

Why didn’t Jack want to be around Aaron, and what changed his mind?

Is this how Aaron and Claire become separated? Is she lured off by Christian and never sees her son again? If so, it seems to suggest that if Christian is a manifestation of the island or working in the island’s interests, then Aaron needs to be separated from his mother for some reason. This would suggest that the psychic’s prediction (that Claire must have a hand in raising Aaron) is in opposition to the island’s agenda, whatever that may be.

Next Episode:
We find out what Locke's up to, and it looks like Percy from the Green Mile (or, if you prefer, Toomes from that one X-Files episode) is back, despite being dead. Also, Sayid and Desmond are back, and yelling stuff. 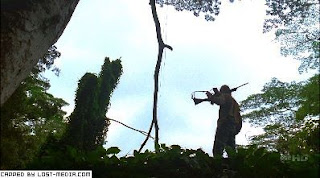