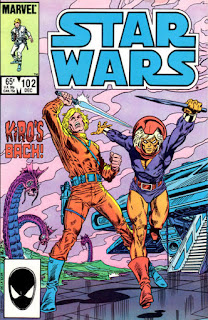 In a Nutshell
The return of Kiro.

Plot
Luke & Lando return to Iskalon, intending to inform Mone about the death of Kiro. The Nagai are on the planet as well, but one of their detachments is taken out by a mysterious figure. When Mone meets with Luke & Lando and learns they were not responsible for defeating the Nagai forces, Mone tells them it must have been Kiro, whom he insists is still alive and on the planet. Luke & Lando are skeptical, but when a secondary force of Nagai attack, Kiro does indeed appear and help fight them off, but not before Mone and other members of the school are captured. With Kiro having disappeared again, Luke & Lando work together to rescue Mone and destroy the Nagai base. They are soon joined by Kiro, who savagely attacks the Nagai and rescues Mone and the rest of the captive school. Afterwards, he tells Luke how he survived his encounter with Den on Kinooine, then followed the Nagai to Iskalon. He begs Luke to keep his survival a secret, as he must remain on his homeworld to help protect his people from the Nagai. Luke agrees to keep his secret, and realizes that while he'd been mourning Kiro, he's now starting to feel pretty good again.

Firsts and Other Notables
This issue reveals that Kiro, believed killed in issue #96, survived and returned to his homeworld of Iskalon, where he is working to repel a Nagai invasion of that world. 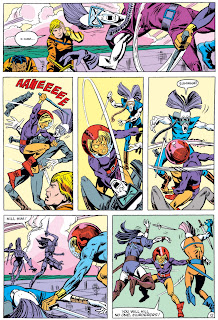 He makes Luke promise not to reveal his survival to anyone, and this marks his last appearance in the series. 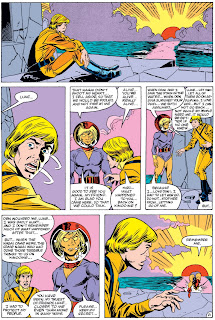 A Work in Progress
Luke's shoto blade, the second lightsaber he created to help battle Lumiya, is used by Lando this issue to assist in the destruction of the Nagai base.

Young Love
Kiro tells Luke that while he loves Dani deeply, his commitments to his homeworld mean he can't be with her, and it would be better for her to believe him dead so she can continue to move on without him.

Austin's Analysis
This is an interesting issue for the way it tries to address Kiro's death, undo it, and write him out of the series (even though the death this issue undoes already effectively wrote him out of the book). That it manages to do all of that relatively well is something of an achievement, even if it all feels a bit unnecessary. Addressing Kiro's death, of course, is something the series definitely needed to do, given his lengthy role as a recurring character, and giving him a proper sendoff is certainly warranted. What is less clear is why Duffy goes through the motions to reveal he survived, only to have Luke swear to keep that revival a secret (and for the series to never feature him directly again). Perhaps Duffy had bigger plans for the character (or simply wanted to leave a door open for the future) that were derailed by the reportedly untimely cancellation of the series. Or she just wanted to give a character that she clearly had some fondness for a happier ending. Regardless, this is Kiro's final appearance in the series, and while bringing him back doesn't make a ton of narrative sense, it's nevertheless appreciated to see the character live on and experience something of a happy ending.

Next Issue
Leia fights on Zeltros!